Kenyan President Uhuru Kenyatta announced on 12 December that the Kenya Revenue Authority (KRA) and the National Treasury will "overhaul" the tax system to reduce the burden for micro, small and medium-sized enterprises (MSMEs), which are deemed essential to Kenya's flagship 'Big Four' agenda goal of generating more private-sector employment. However, the government faces significant fiscal constraints without new borrowing and tax changes will not address other barriers to MSME growth, most notably access to capital, delayed tax refunds, and government payment arrears to local suppliers and contractors.

The tax review aims to reduce the overall burden on MSMEs in line with the Kenyan government's goals of supporting job creation and expanding the tax base under the flagship 'Big Four' agenda. The announcement was made during Kenyatta's speech on Kenya's Independence ("Jamhuri") Day, which is often used to outline the government's policy priorities. MSMEs are significant contributors to job creation and economic growth in Kenya (accounting for around 28.4% of GDP in 2018) primarily in the accommodation, food services, manufacturing, and wholesale and retail distribution sectors. The KRA is trying to increase the contribution of income tax sourced through Pay As You Earn (PAYE) during fiscal year (FY) 2019/20. The Treasury estimated it would raise KES110 billion (USD1.08 billion) in tax from wages in the first quarter of FY 2019/20 but missed this target by 12%.

The review probably will be expanded to streamline and reduce presumptive and turnover taxes, and indicates further inconsistencies in Kenya's fiscal policy during 2020. Most likely to be streamlined will be the annual turnover tax charged at the rate of 3% of gross receipts (for companies earning less than KES5 million) and the associated presumptive tax set at 15% of the value of the cost of permit renewal for a business each year. These measures were reintroduced under the Finance Act 2019, with the aim of broadening the tax base. In addition to frequent changes in tax policy, the Kenyan government's fiscal deficit target has changed three times and the pace of fiscal consolidation has slowed since Ukur Yatani Kanacho was appointed as the new finance minister in July 2019.

Overall, fiscal constraints being faced in meeting the Kenyan government's 2019/20 budget strongly indicate that MSMEs are unlikely to benefit from any outright reduction in corporate tax, with contractors involved in large development projects being prioritised in clearing payment arrears. Based on prior discussions in December 2018, the National Treasury and the KRA are likely to consider reducing corporate taxes for MSMEs to 25% from 30%, but we view actual reduction as unlikely. This is because a Supplementary Appropriation Bill finalised on 5 December 2019 reduced the fiscal space available for further tax reductions, and there is political opposition to further increasing domestic or external borrowing. The bill authorised USD530 million in net additional spending, after the National Assembly - led by the Finance Committee which is usually aligned with the Treasury - revised these outlays down from USD720 million. The new budget revises the fiscal deficit target for 2019/20 from 5.9% of GDP to 6.2%, with the Treasury describing previous revenue projections as "unrealistic". An additional KES12.61 billion (USD123.65 million) was allocated to projects under the president's 'Big Four' agenda (especially universal healthcare coverage) and KES23.997 billion (USD235.3 million) to the Mombasa to Nairobi Standard Gauge Railway (SGR), with the next debt payment, totalling USD498 million, on the SGR to the Chinese state-owned Export-Import Bank of China being due in January 2020.

IHS Markit sees early signals of declining business confidence in 2020 likely related to concerns over cash scarcity, and even if fiscal changes are made, the MSME sector will continue to face capital constraints and other barriers. IHS Markit's Kenyan purchasing managers' index for December 2019 indicated that business confidence in future output had reached its lowest level since February 2017, just prior to the disputed August 2017 elections. The most important drivers are barriers to accessing capital; delays in tax refunds from the KRA; government payment arrears to local suppliers and contractors, which increased to 1.6% of GDP in 2018 from 0.9% in 2016; rising rents (especially in Nairobi); the existence of multiple business charges; and a six-year low in cash circulation in November 2019 after the KES1,000 note was banned two months previously. As a result, the MSME sector is likely to continue facing a challenging environment. Its severity is shown by the data-point that around 2.2 million MSMEs closed from 2011 to 2016 because of high operating costs, according to the most recent Kenya Bureau of Statistics report. Another constraint has been a cap on the bank lending rate introduced in 2016 and repealed in November 2019 for all new loan agreements, which reduced financing to SMEs from commercial banks. Although credit provision is likely to gradually improve, lower-growth SMEs with capital requirements that exceed existing loan products, especially in higher-value sectors such as manufacturing and ICT, will continue facing cash flow problems given the risk aversion of larger, foreign sources of financing. 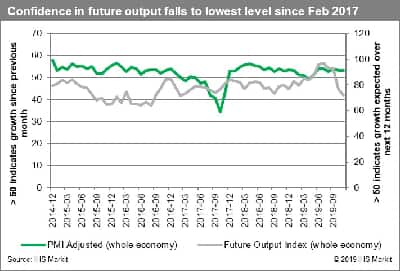