LPG consumption has grown rapidly in Kenya in recent years as import and distribution infrastructure has improved; however, market penetration remains very low. In the coming years, we believe the primary constraint on growth will switch from access to supply to affordability, resulting in slower demand growth in the near term. The impending reimposition of value-added taxes (VATs) on LPG as of July 2021 will reduce affordability for many Kenyan households, and this will be exacerbated by expected higher global LPG prices in 2021-22. Beyond 2030, as GDP grows and household income improves, we expect per capita LPG consumption growth to accelerate, reaching 8-9 kg per person by 2050. Much faster growth could be achieved with lower pricing, either through greatly improved efficiency (and lower wholesale/retail margins), or a subsidy program. We expect LPG import capacity will outpace domestic consumption growth, allowing Kenya to become an import hub for the region, exporting some LPG over land to neighboring countries with limited alternatives for supply.

A growing economy and a great need for better cooking fuel

Despite its relatively large population and fast-growing economy, Kenya's energy sector remains underdeveloped, with the vast majority of households relying on biomass sources for cooking. As of 2017 (the most recent year for which comprehensive data are available), 93% of all residential and commercial energy consumption in Kenya was fueled by biomass sources, mainly charcoal and firewood (see Figure 1). Kenya has a large traditional charcoal production sector, and continues to be a net exporter despite serious deforestation. The biomass share of the residential/commercial fuel mix has slowly declined from a peak of 96% in 2003, with relative gains going mainly to electricity as the country slowly builds out its grid to reach more suburban and rural areas.

The Kenyan government has sought to encourage displacement of biomass and kerosene in households with LPG, and in recent years has had some initial success. LPG consumption began growing rapidly from a very small base in 2014, and by 2017 consumption in the residential/commercial sector had tripled from 2013 levels to about 124,000 metric tons. Still, this translated to only about a 0.7% share of the overall fuel mix. Rapid demand growth continued in 2018-19, with demand nearly doubling again to 217,000 metric tons. The COVID-19 pandemic interrupted this trend in 2020, but we now expect that growth will rebound in the coming years. 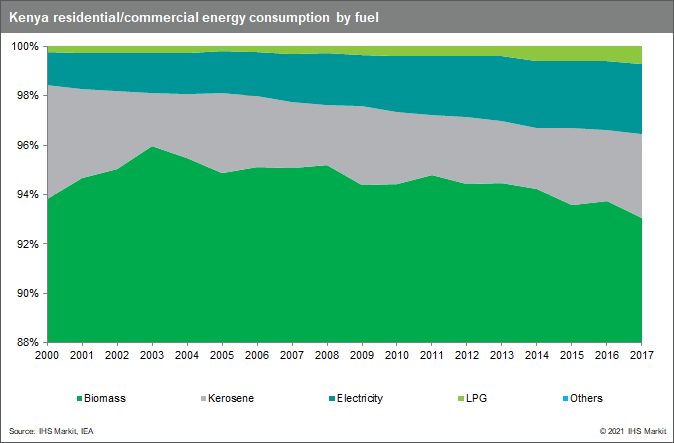 Several factors are driving LPG demand growth in Kenya. In addition to policy measures, better product availability has been a key enabling factor, allowing wealthier households and restaurants in urban areas to switch to LPG for cooking. Kenya now has two LPG import terminals in Mombasa, and transporting LPG by rail and trucks into the interior has increased. Further expansion of port and storage facilities in the coming years should allow for continued consumption growth, though affordability constraints will likely slow the growth rate relative to recent years' rapid buildup.

The Kenyan government has implemented several policies to promote adoption of LPG. Since 2016, LPG has been exempted from VATs imposed on other fuels. The government had also set up a program to distribute 6 kg cylinders and cookstoves at a subsidized price to low-income households. However, this program was suspended in 2018 following a court case involving fraudulent distribution of substandard equipment. In mid-2020, the court case was dropped and the program resumed, with the aim to distribute about 329,000 units that had been sitting in storage while the court order was in effect.

In 2020, a new Finance Bill was passed removing the VAT exemption for LPG. As of 1 July 2021, LPG will be subject to the standard 14% tax rate. Several officials including members of parliament have proposed further delaying reimposition of the tax, but as of this publication the change remains on the books.

Retail prices of LPG are not regulated, so despite favorable taxation policy and equipment subsidies, the cost of LPG reportedly remains out of reach for most households in Kenya. Current residential/commercial consumption per capita stands at about 4.5 kg per person, up from less than 2 kg just five years ago (see Figure 2). The pandemic led to an inflection point in demand growth, with much smaller gains in 2020 than in previous years. We anticipate a return to consumption growth going forward, but at a slower rate given the impending change in taxation policy and expected tightness in global LPG markets (and thus higher prices) in 2021-22. Growth in per capita consumption should accelerate somewhat through the forecast period as economic growth leads to higher household income. 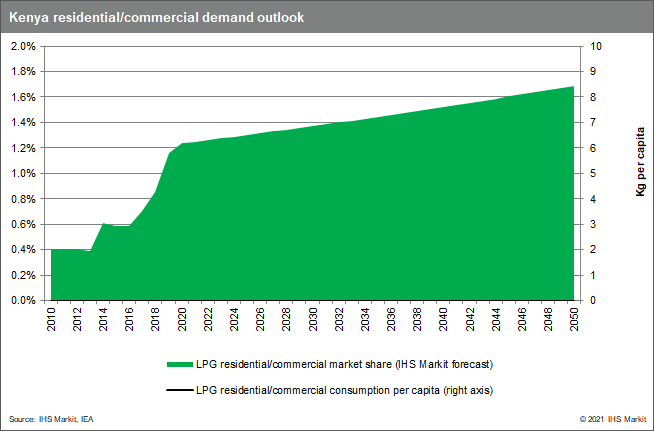 We now forecast that per capita LPG consumption in the residential/commercial sector will reach 8-9 kg per person by 2050. This could be accelerated by either faster GDP growth or a lower LPG cost. Increased market efficiency and lower wholesale and retail margins will gradually improve the situation. Implementation of a subsidy program would likely push this much faster—countries with generous subsidies can quickly reach very high per capita LPG consumption, in the range of 30-50 kg per person in some cases. Our base-case assumption is that a subsidy will not be introduced, pricing will remain unregulated, and market efficiency will improve slowly over time. Per capita GDP will also grow slowly, from about $1,800 in 2020 to just under $2,600 by 2050 (constant 2020 US dollars). This will lead to an expansion of the number of households that can afford unsubsidized LPG, but demand growth will be slower than the very rapid expansion of recent years.

It should be noted that our outlook for demand remains well below the stated import capacity even of just the AGOL terminal. We think it is likely that Kenya will emerge as an import hub for East Africa going forward, with some LPG imported via Mombasa helping to establish and grow markets in Ethiopia, Uganda, Rwanda, Burundi, and Tanzania. Total imports into Kenya are thus likely to move higher than domestic consumption, and more regular overland exports should also emerge. Eventually, Kenya could forge a path similar to that emerging in South Africa, which is also the primary source of LPG supply for much of southern Africa.