Growth across the Kazakh economy remained strong midway through the year, representing a much-improved picture from that seen just after the outbreak of war in Ukraine, when we noted the impact of severe logistical problems. The recovery has solidified despite headwinds from the Russia-Ukraine war and China's Zero Covid policy, with gains noted across both the manufacturing and services sectors.

The Tengri Partners Kazakhstan PMI data, compiled by S&P Global, signalled a third successive monthly expansion in overall output, with the seasonally adjusted composite index (covering manufacturing and services) hitting a survey-high in May and continuing to signal solid growth in June. Additionally, our forward-looking indicators suggest output growth will remain strong, as new orders rose at the joint-fastest pace in close to three-and-a-half years of data collection.

Surging prices remain a key headwind to future growth, with inflation potentially exacerbated as the tenge moves unfavourably against the US dollar. 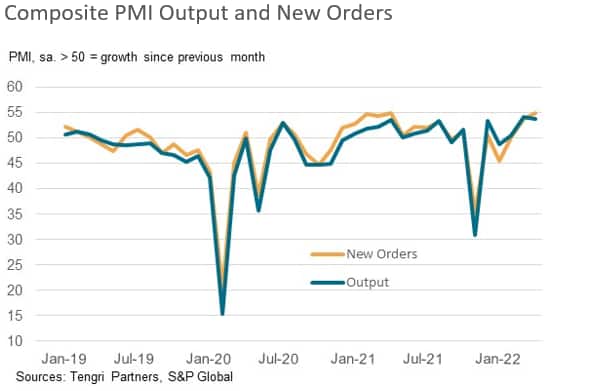 After having suffered in the immediate aftermath of the outbreak of the war in Ukraine, the Kazakh manufacturing sector has shown real signs of recovery in recent months, suggesting that firms have been able to overcome some of the logistical obstacles linked to sanctions placed on Russia.

New orders increased for the second month running in June, and at the strongest pace since the PMI survey began in March 2019. Firms reported securing new business from both new and existing clients as some manufacturers indicated that they had been able to resume previous partnerships.

There was also positive news on the employment front, with staffing levels up for the first time in a year and to the greatest extent since November 2019, with firms increasingly able to fill previously vacant positions. 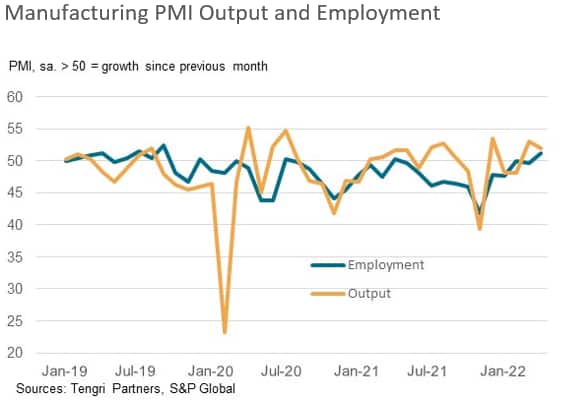 Although the manufacturing sector overall ( and demand in particular) showed signs of improvement, firms continued to face severe logistical difficulties due to the sanctions on Russia. Suppliers' delivery times lengthened sharply again, with difficulties securing inputs potentially preventing manufacturers raising output more quickly and leading to a build-up in backlogs of work.

Signs of improvement in manufacturing joined a healthy recovery in the service sector at the midway point of 2022, after the volatility experienced in late 2021 and early this year. Service providers across Kazakhstan reported growth in business activity for the third month running. Moreover, the back-to-back expansions of service sector activity seen in May and June have been the strongest in the survey's history.

Strengthening client demand and new client wins have also resulted in new orders increasing continuously since April, with the latest upturn being the fastest in a year. The drag from the war in Ukraine, imposed sanctions on Russia and the resurgence of lockdowns across China amid COVID outbreaks were overcome as the country lifted its own pandemic related restrictions. Demand for Kazakh services flourished as borders opened and international flights resumed. 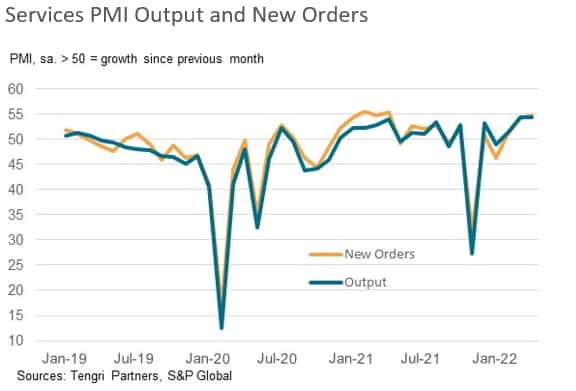 However, after broadly stabilising in May, staffing levels again fell during June. The renewed contraction in employment often reflected wage dissatisfaction amongst workers, resulting in high staff turnover.

While challenges to the sector persist, confidence across panellists remains broadly positive as firms were expectant of improvements in the global economy and client demand.

As well as logistical difficulties in supply chains, another headwind for companies remains severe price pressures, linked to the aforementioned issues with the supply of materials and global price rises. The rate of input cost inflation across the private sector eased for the second month running in June from April's series record, but remained elevated. The same was true for selling prices as firms endeavour to protect margins.

Official data signalled that consumer price inflation continued to accelerate into June, with the annual increase of 14.5% the sharpest since September 2016.

While the National Bank of Kazakhstan paused its recent interest rate hiking series in June, continued pressure on consumer prices will likely see them tighten monetary policy further during the second half of the year. 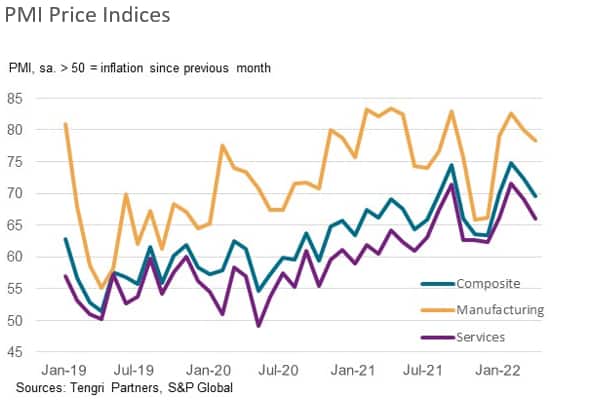