World containerized exports of footwear decelerated the pace in 2015 to an estimated 0.5 percent growth rate, after expanding by 3.0 percent in the prior year. Global demand from major buyers, with the exception of the US, was sluggish on the back of weakening economic conditions. For 2016, world containerized exports of footwear are forecast to pick up the pace and expand 3.0 percent as demand from the European Union (EU) and the major Asian importers improves. 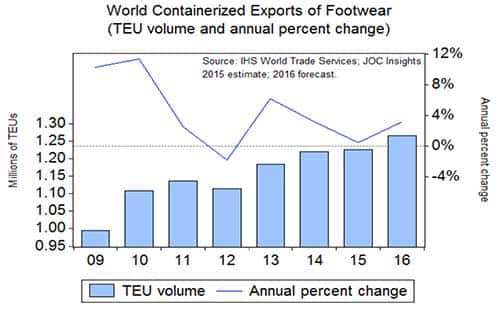 The United States is the biggest importer of footwear by TEU volume, accounting for an estimated 34.6 percent of the market in 2015, up from its all-time-low share of 33.1 percent in the prior year, but down in share from pre-recession years likely linked to sluggish growth in disposable incomes in the aftermath of the global recession. The EU follows with an import share of 24.0 percent, up from 20.8 percent in 2010, while Japan and Russia accounted for 4.8 and 2.6 percent of the import market, each down in share compared to 2010. 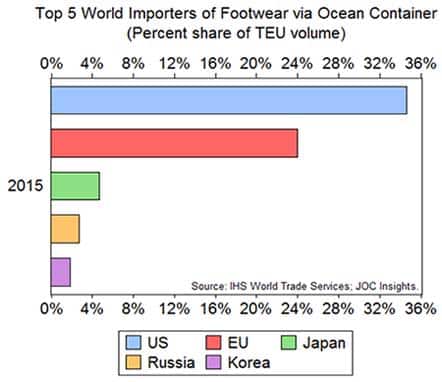 The US contributed to growth in the global footwear imports trade while the EU, Russia subtracted

In 2015, the US contributed an estimated 1.7 percentage points to growth in the global containerized import trade of footwear (estimated at +0.5 percent), while the EU and Russia subtracted from growth by 0.6 and 0.1 percentage points, respectively. Consumer spending in the EU have been sluggish throughout 2015 while in Russia has been falling. In real terms, private consumption in Russia tumbled 8.9 percent in 2015 while the ruble was down by as much as 60 percent on an annual average relative to the US dollar, severely impacting imports activity. 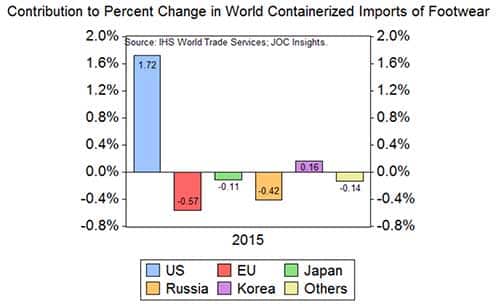 China is by far the largest exporter of footwear in the world, accounting for 75 percent of the global containerized export market, but it has seen its share decline significantly over the last 5 years on higher production costs and shortage of low-skilled labor. In 2010, China held a share of 80.0 percent. Meanwhile, Vietnam and Indonesia have been gaining share over the same time period. In 2015, Vietnam held a global share of 10.0 percent, up from 6.7 percent in 2010, while Indonesia held a global share of 4.1 percent in the same year, up from 3.0 percent in 2010. Vietnamese exports of footwear have been increasing at a decent pace in recent years on account of lower production costs relative to China's, decent availability of low-skilled labor, and competitive currency. 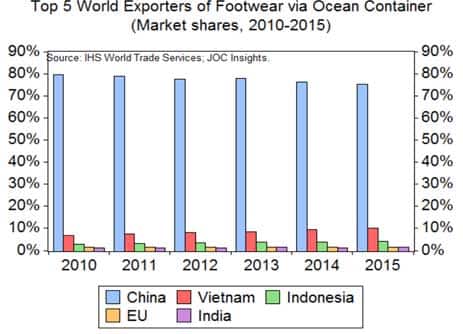 Learn more about how you can benefit from our import and export data.

RT @IAPHWorldPorts: Join us for our next webinar discussing a united, low emission and digitised industry with speakers Kitack Lim, Secreta…