JOC insights: US imports of tableware and household articles of plastic

US containerized imports of tableware and other household articles grew 3.1 percent in the third quarter, year-over-year, and marked the 16th consecutive year-over-year expansion. The US home sales market continues to recover, which has led to solid demand for imported furniture and other home goods such as tableware, kitchenware, toilet articles, and other household articles made of plastic. A strong dollar also was a contributing factor to the solid demand for these imports, while disposable income improved at a respectable pace. 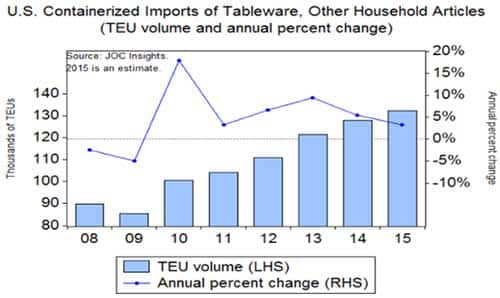 For all of 2015, I am anticipating the trade will hit an all-time volume high for a total TEU count of approximately 132,216. The 2015 expansion at 3.3 percent, nevertheless, will register the weakest pace in the last 4 years.

Vietnam gains share in the US tableware and household articles imports market, while China loses

By TEU volume, China is by far the largest supplier of tableware and household articles to the US, accounting for 83.2 percent of the market year-to-date through September, but down from 84.6 percent over the same period in 2014, likely owed to high production costs. Inbound shipments from China were only up 3 percent year-to-date. Taiwan follows with a 2.6 percent share year-to-date, up very modestly over the same period in 2014.

Fourth-ranked Vietnam continues to gain sourcing share from 0.6 percent in 2013 to 1.5 percent in 2014 and to 2.3 percent year-to-date. Lower production costs and favorable exchange rates have bolstered the trade. IHS anticipates the Vietnamese dong will decline in value against the US dollar by 2.5 percent this year, marking the 20th consecutive yearly decline. Inbound shipments from Vietnam more than doubled in 2014, and were up a remarkable 83 percent year-to-date. 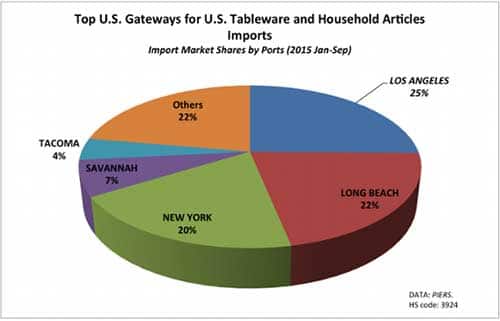 Learn more about how you can benefit from PIERS import data.