US containerized exports of logs and lumber fell by 11.5 percent in 2015 after expanding at a decent pace in the prior two years. Global demand weakened, particularly from key export markets as their corresponding construction sectors continue to battle a recessionary phase. Meanwhile, the US dollar rose significantly over the last year, making exports less competitive in global markets. 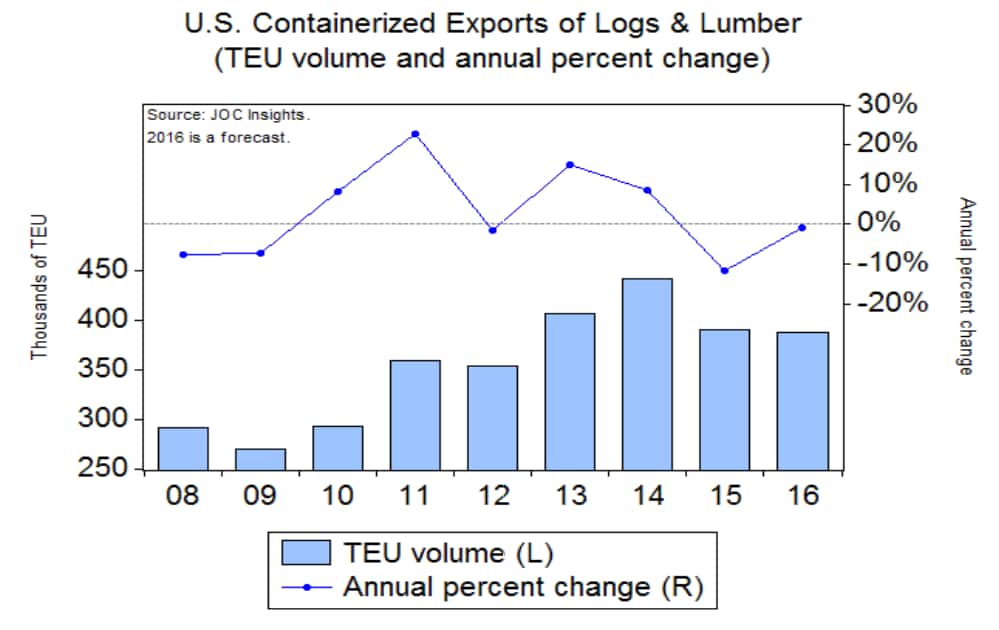 For 2016, I anticipate containerized logs and lumber exports to stay soft, and edge down 0.8 percent from 2015 as demand from key export markets modestly improves and the dollar strengthens a little more.

China is by far the largest export market, accounting for more than half of all outbound shipments of logs and lumber in 2015. Over a seven-year period, China's share of this export market has doubled, from 25.9 percent in 2007 to 54.9 percent in 2014. In 2015, China gained one more full point of market share, even despite the falling demand for logs, mainly because of tumbling demand from India. 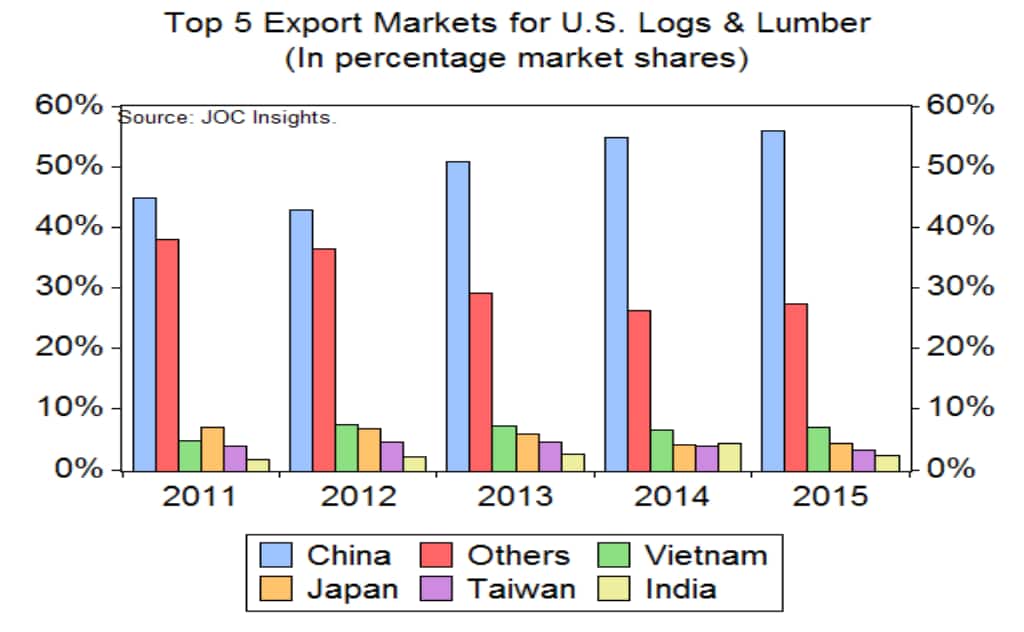 2015 losses were seen across all major markets

The downturn in US logs and lumber export volume during 2015 was mostly tied to China, which subtracted 5.5 percentage points from growth. China's construction sector is in recession. Last year alone, residential construction spending in China edged down 0.1 percent after increasing 5.2 and 6.8 percent in 2013 and 2014, respectively. 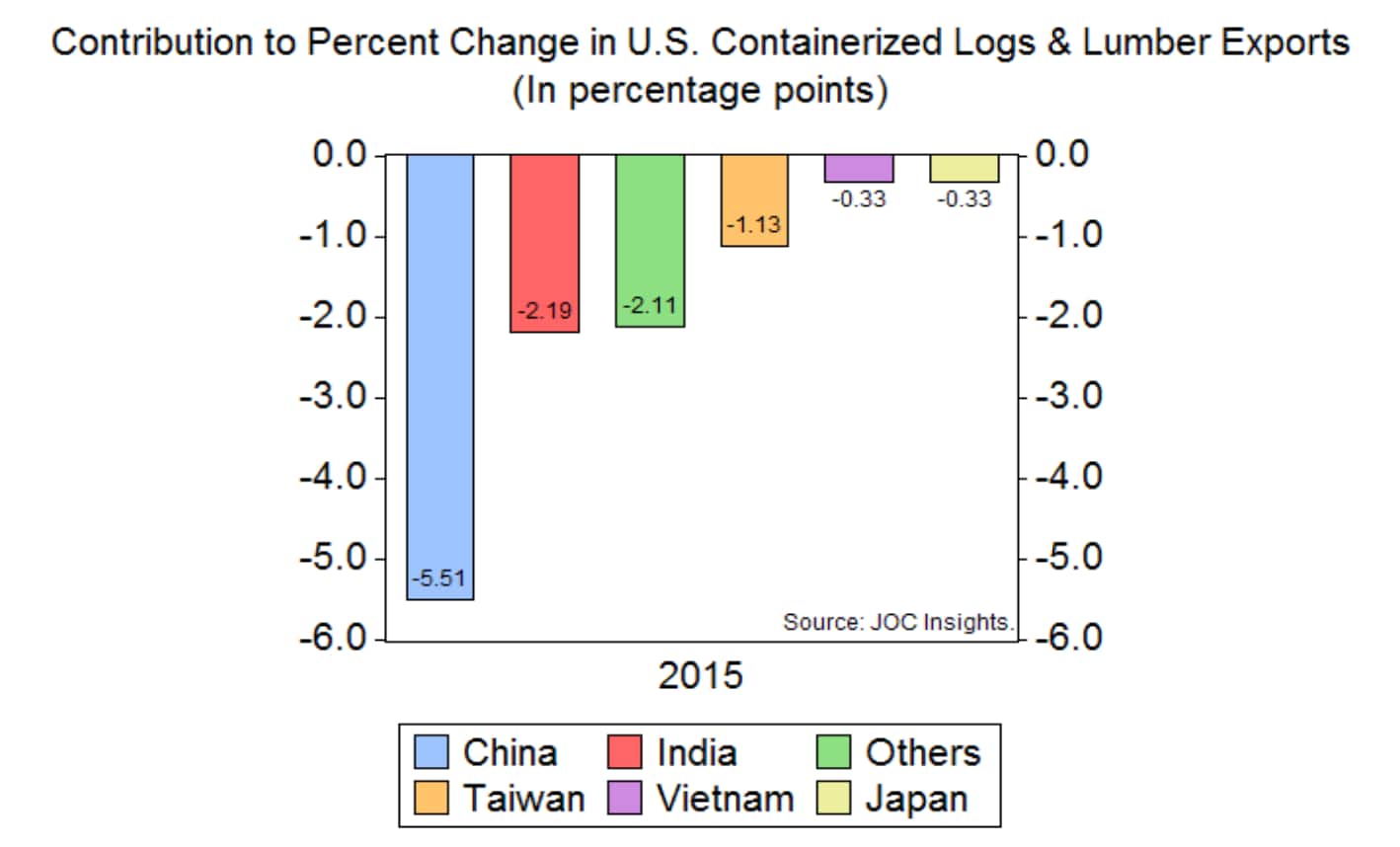 India subtracted 2.2 percentage points from growth during the year as US exporters faced stiff competition from Oceania and the European Union. According to data from IHS World Trade Services, India's containerized imports of coniferous lumber were up 5.1 percent in 2015, with shipments from Oceania and the European Union expanding 8.1 and 12.2 percent in the year, respectively.

Japan subtracted only one-third of a point from growth in 2015. Residential construction spending in Japan is struggling, down in 2015 for the second consecutive year.

Residential construction spending in China is forecast to rebound modestly in 2016 by 0.8 percent after edging down 0.1 percent in the prior year. The recent divergence in housing sales rebounding and construction starts contracting follows the normal housing market cycle, namely sales activities will first recover before inventory is digested to a degree that would bring a rebound in construction. 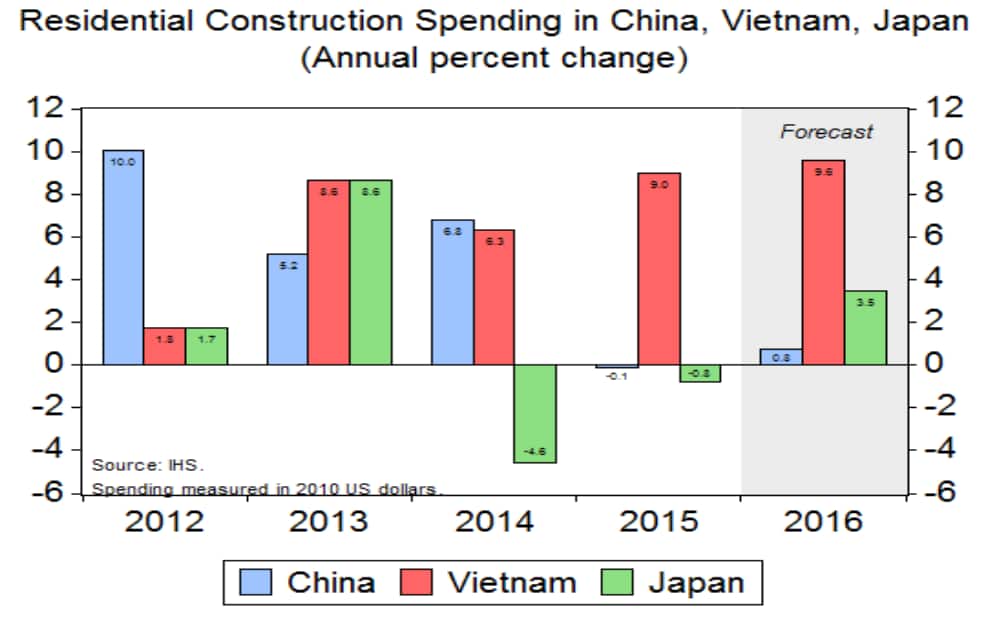 In Japan, higher housing prices because of increased construction costs have weakened residential investment. Furthermore, a declining population has less need for new housing construction. IHS expects residential construction spending in Japan to grow between 2015 and 2020 at a compound annual growth rate of 1.4 percent, and later slow to a 0.7 percent annual rate between 2020 and 2015. It is likely Japan will be a tough market for US exporters to sell in the years to come.