US DDGS exports underperform in early 2016

US exports of DDGs (distiller's dried grains and soluble) have soared in recent years from 1 million tons in 2006 to more than 12 million tons in 2015, according to data from IHS Global Trade Atlas. DDGs are produced from the fuel ethanol industry, and are widely used as a feed for livestock for its rich concentration of energy. 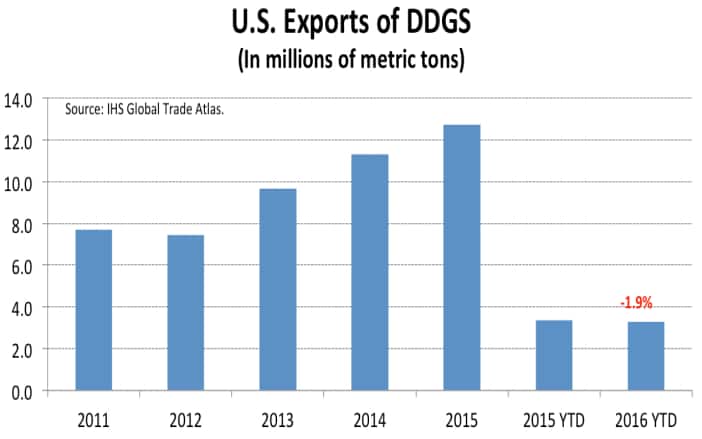 China has driven the bulk of the growth in the last seven years, taking 51 percent of the export market in 2015, triggered by the need to feed its large and growing population. Mexico (13 percent) was the second-largest importer, while Vietnam (5 percent), Korea (5 percent), and Canada (4 percent) round out the Top 5 foreign buyers of US DDGs.

From January through April, however, the export performance of DDGs was disappointing; the trade volume was down 1.9 percent, with China the main source of weakness. What happened to Chinese demand?

Year-to-date through April, China demand for US DDGs fell in volume by half, subtracting a substantial 17.3 percentage points from export growth. The disappointing performance is linked to an investigation by the Chinese administration into potential dumping and subsidizing of US DDGs imports. US grains industry organizations and traders read this action as a move by China to reduce imports of corn and alternatives as they are sitting on substantial stockpiles of corn. 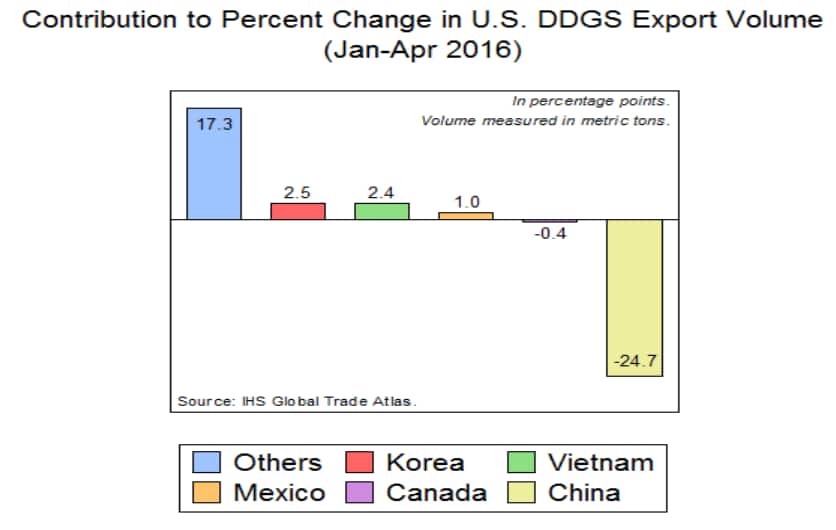 Notwithstanding, there were solid gains in most markets, with Korea and Vietnam leading the gains, and adding 2.5 and 2.4 percentage points to year-to-date growth.

Demand from Vietnam has been remarkable during the past few years, growing at annual rate of 15 percent between 2013 and 2015. Year-to date through April, U.S. exports of DDGs to Vietnam were up an impressive 45.5 percent, totaling 257,000 metric tons. 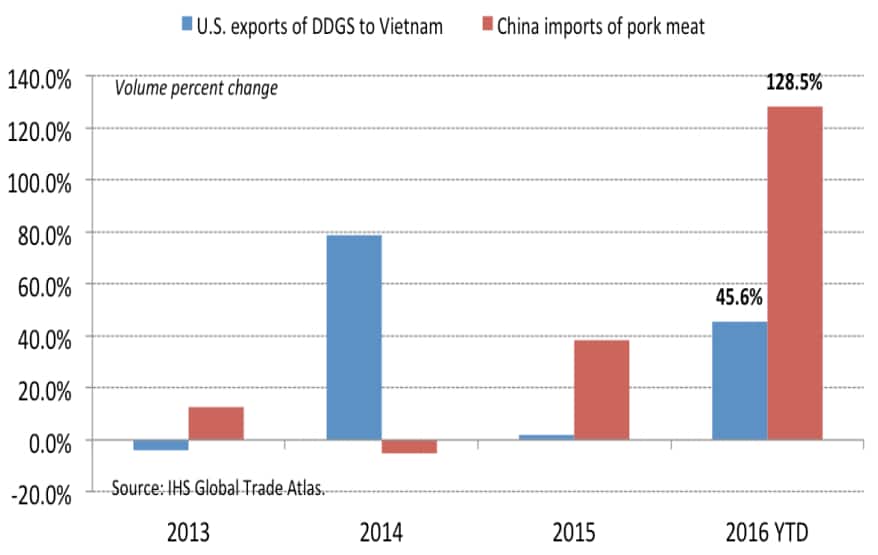 A major demand driver for Vietnam of late has been the pork shortage in China. Piglet survival rates have been very poor for China, prompting increased import demand worldwide, and benefiting Vietnam. China imports of frozen pork from Vietnam are expected to grow 8.0 percent in volume this year, according to IHS World Trade Service.

China's importance as a #trade partner for German pork was clear in 2019 when the volume of German exports to China… https://t.co/FVqHZtM1SB

IHS Markit, Maritime & Trade is proud to welcome Deenesha Murugun as our first intern from the University Malaysia… https://t.co/hRlbje0y3E

According to the new release of the IHS Markit GTA Forecasting model global merchandise #trade is likely to go down… https://t.co/nOhdwgB5uV