JOC Insights: US exports of cotton

US cotton exports up strongly year to date

According to our data from IHS Markit Global Trade Atlas, US cotton exports by volume were up nearly 72 percent from January through May. Cotton production in the US has been strong in recent months, while foreign demand for cotton surged. Top exporters India and Pakistan have faced crop deficits and tighter stocks in 2016, which benefited US exporters. 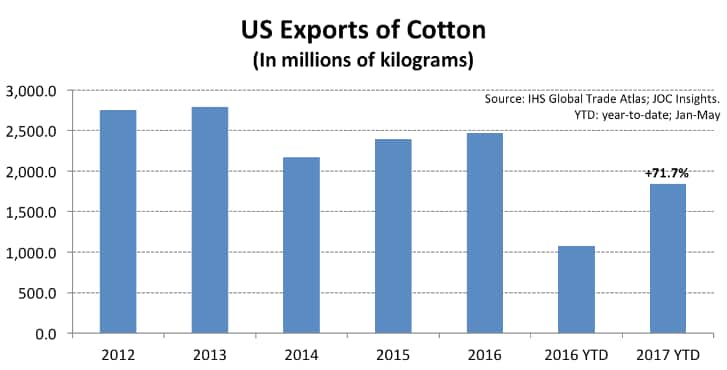 Vietnam has been a strong driver of US cotton exports as of late, likely linked to declines in cotton spinning in China. US cotton exports to Vietnam were up 53.2 percent year to date. As cotton prices in China were driven higher (relative to global levels) by government intervention, foreign direct investment flowed into Vietnam's spinning sector on the back of the ASEAN-China free trade agreement. Vietnam-made cotton yarn has duty free access to China.

As measured by kilogram volume, Vietnam is the largest export market for US cotton, holding 22 percent of the total export volume in 2016, up from just 5 percent in 2012. Second-ranked Turkey holds 13 percent of the market, but it has seen its market share decline from 20 percent in 2014. Similarly, China holds 12 percent of the market and its market share is down from 54 percent in 2012. However, China's demand picked up the pace, and US cotton exports to that market were up 174 percent year to date. Substantial governmental support for yarn spinning in western China helped increase China's demand for raw cotton. 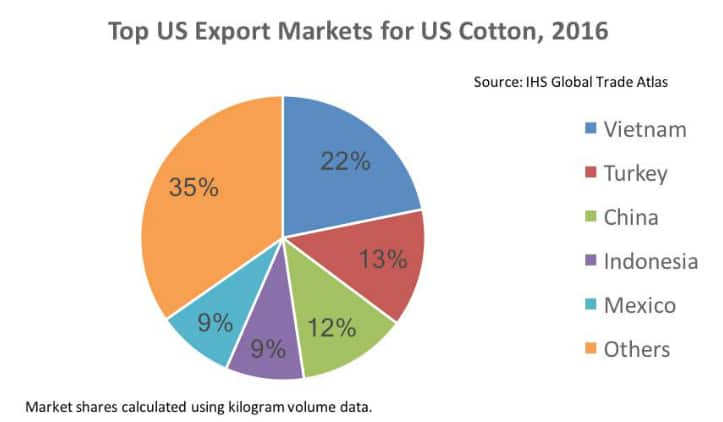 Vietnam is largest source country of cotton yarn to China

China's imports of cotton yarn has increased modestly this year, up 2.4 percent in kilogram volume from January through May. 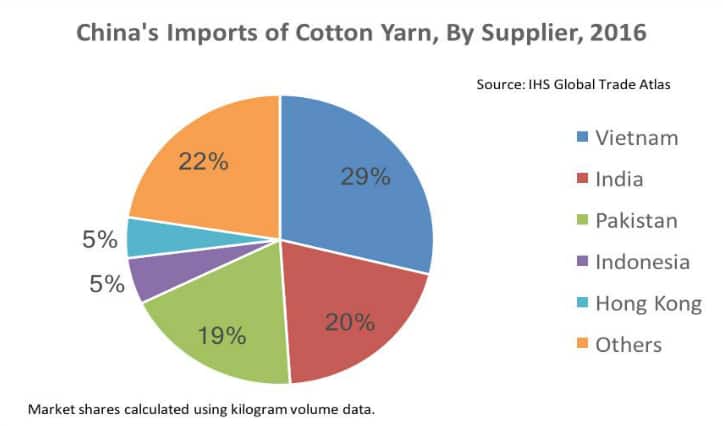 Vietnam is the largest source country of cotton yarn to China, accounting for 29 percent of the import market, up from 10 percent in 2012. Year-to-date, China's imports of cotton yarn from Vietnam were up 21.3 percent, whereas imports from India and Pakistan were down 0.5 and 14.6 percent, respectively. The import decline from India and Pakistan is partially attributed to lower cotton production in those countries, but also to the positive effects of the ASEAN-China free trade agreement that came into effect in 2010.

Learn more about how you can benefit from IHS Markit trade data.

#TPMTech evaluates whether #technology can help #cargo flow in and around ports and expedite container returns duri… https://t.co/OSETspGG5c