Over the past several years, Japan - which reimburses 99% of all medicines approved in the country - has introduced a raft of policies that have led to increasing pricing pressure on pharmaceuticals, including cost-effectiveness assessments (CEAs).

Last week, Japan set a new milestone by applying cost-effectiveness criteria for the first time to its price assessments. Novartis' chimeric antigen receptor T-cell (CAR-T) therapy Kymriah and GlaxoSmithKline's chronic obstructive pulmonary disorder (COPD) treatment Trelegy 100 Ellipta received downward price adjustments of 4.3% and 0.5%, respectively, being the first two treatments to complete Japan's recently-launched CEA program. Despite being one of the world's most developed pharma markets, Japan launched the CEA scheme only in 2019, in a further attempt to rein in soaring healthcare spending.

Kymriah had been reimbursed in May 2019 with a reimbursement (National Health Insurance, NHI) price of JPY34,113,655 (USD310,692). As the first CAR-T therapy to market in Japan, this price was calculated using the cost-based method, which applies when there are no real comparators on the market. This price also included a 35% utility premium awarded to Kymriah. However, this premium was then reduced to 7% due to the treatment's low cost-disclosure ration - another recently introduced policy in Japan - of under 50%.

Earlier this month, however, Japan's reimbursement agency, Chuikyo, recommended a further downward adjustment of 4.3% in Kymriah's NHI price, bringing it to JPY32,647,761 (USD302,153). This brings the reimbursed price of Kymriah well below that in the US. In February 2018, the US Institute for Clinical and Economic Review (ICER) stated that Kymriah, at a list price of USD475,000, was priced in alignment with their clinical values. 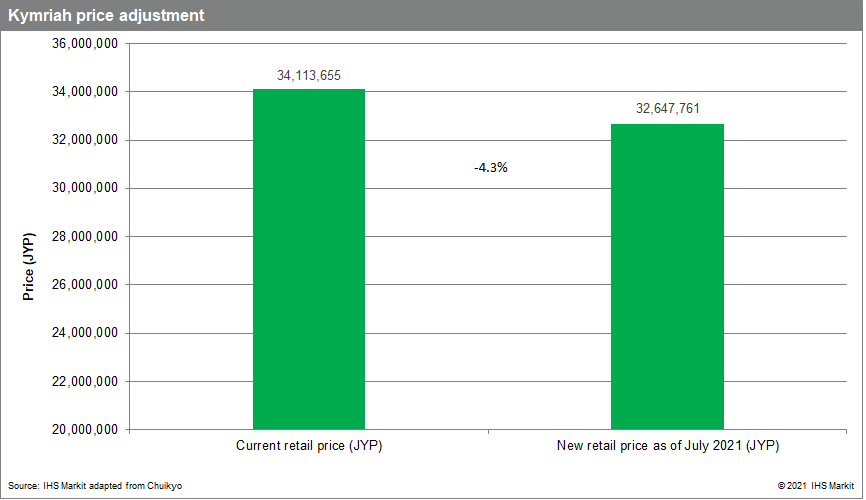 In comparison, GlaxoSmithKline's Trelegy 100 Ellipta (also categorized as H1 under the CEA classification scheme) received a much smaller downwards adjustment in its NHI price of 0.5% to JPY4,160.80 (14 inhalation kit) and to JPY8,805.10 (30 inhalation kit). 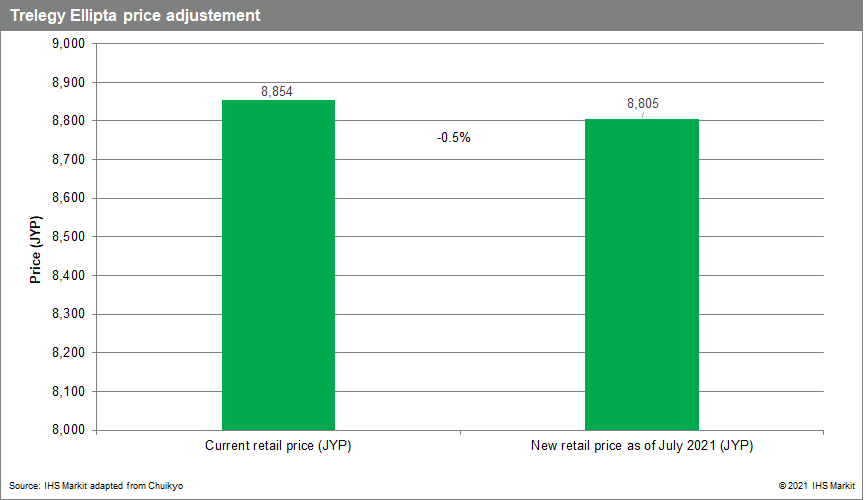 The developments mark a significant precedent in Japan, which had debated the possible introduction of post-launch NHI price adjustments for several years, amid wider discussions over the future direction of cost-effectiveness assessments in the country.

The downward adjustment of Kymriah's and Trelegy 100 Ellipta's reimbursement prices, while relatively small, mark a precedent in Japan's handling of cost-effectiveness as a factor in reimbursement pricing. What's more, it is worth noting that the re-pricing of just these two treatments will have a wider impact on comparable treatments, with similar pricing adjustments expected to be applied.

Another potential candidate for CEA-based price adjustment is Alexion's paroxysmal nocturnal hemoglobinuria (PNH) treatment Ultomiris, which received an NHI price of JPY717,605 in September 2019, using Soliris as a comparator. Ultomiris was classified as yielding an incremental cost-effectiveness ration (ICER) range of JPY15 million/quality-adjusted life-year (QALY) or more, indicating that the treatment is expected to receive a downward price adjustment. Both Yescarta and Ultomiris are classified in the H1 category of CEA-applicable treatments, i.e. treatments that received a launch premium and which have peak sales forecasts of JPY10 billion or more.

And that's not all: besides Kymriah and Trelegy 100 Ellipta, 11 other treatments are currently undergoing CEAs in Japan, and are expected to imminently complete the process. These include Takeda's Trintellix, Ono Pharmaceutical's Coralan, and as mentioned above, Alexion Pharmaceuticals's Ultomiris. In the future, Japan is expected to continue to subject innovative treatments to CEAs, adding to the existing pricing pressure in the world's third-largest pharma market.