Japan's manufacturing economy remained stuck in its deepest downturn since mid-2016 in March, adding to gloomy prospects for the economy in 2019.

The latest Nikkei PMI survey data indicate that the manufacturing sector continued to struggle primarily in the face of a deteriorating external environment at the end of the first quarter. Factory production, order books and exports all contracted at increased rates in March. 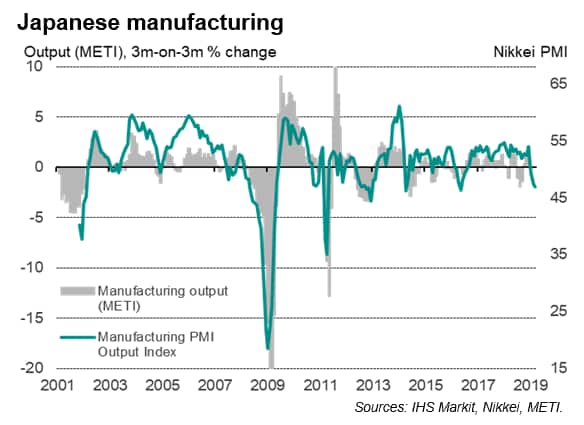 The flash Nikkei Manufacturing PMI for March remained unchanged at 48.9 in March, registering below the 50.0 no change level for a second successive month to indicate an ongoing downturn in the goods-producing sector. The latest readings are the lowest recorded since June 2016.

Among the various survey sub-indices, the output index signalled a third consecutive monthly fall in manufacturing production, with the rate of decline accelerating to the fastest since May 2016. The drop in production was the third largest seen since 2012.

As with other PMI surveys in developed economies such as Japan, a drop below 50 for the output index is significant. Importantly, while the official measure of production often falls into decline, the downturns prove to be short-lived (often linked to one-off factors or industry specific events) with the exceptions of occasions when the PMI has also fallen below 50. The recent weakening of the headline PMI therefore suggests the manufacturing sector is at risk of entering a period of marked decline. Current PMI readings are consistent with production dropping by approximately 2% in the first quarter.

The decline in output was fuelled by a third straight month of falling new orders, which in turn contracted at the sharpest pace since June 2016.

New export orders remained a key area of demand weakness, dropping for a fourth month in a row to register the second-steepest downturn in overseas sales for over two-and-a-half years. 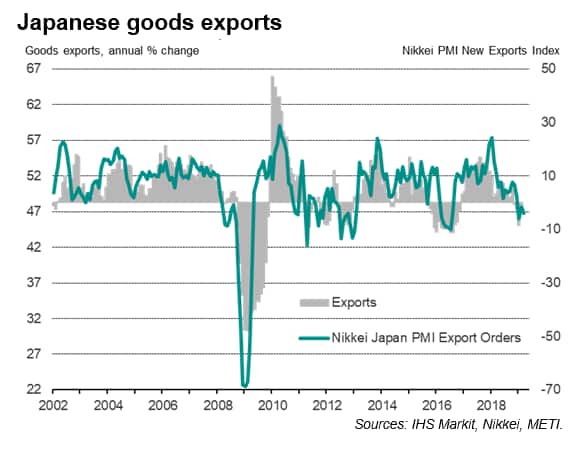 With inflows of new work falling, companies relied on eating into backlogs of work to support production. The latest reduction in outstanding business was the quickest since December 2012.

Such a steep drop in backlogs bodes ill for employment. While sustained hiring was recorded by the March survey, headcounts will inevitably come under pressure unless demand revives in coming months. Marked falls in the backlogs of work index are usually soon followed by a decline in the survey's employment index. 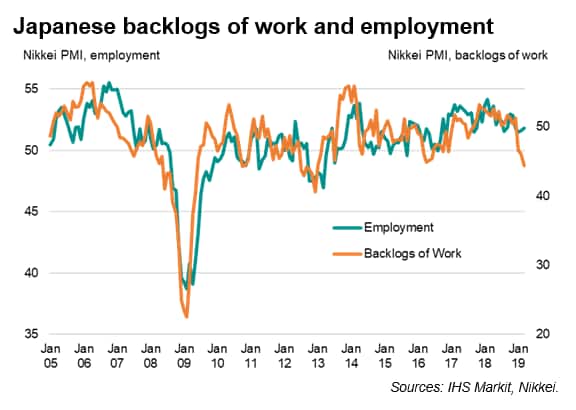 Other survey indices corroborated the downbeat assessment. The forward-looking new orders to inventory ratio remained negative, and firms' input buying declined at a rate not seen since mid-2016. Firms' optimism about the coming 12 months meanwhile ticked marginally higher than in February but remained among the lowest since 2012, adding to the gloomier picture.

Increased pessimism with regard to the future production trend was often blamed on the impact of trade wars and slower demand from key export markets such as China and the EU. Particular stress was seen in the auto industry. Japan is the world's third largest producer of autos, but the sector has seen the downturn worsen in recent months. Detailed sector PMI data showed that global auto sector new orders dropped at the fastest rate for over six years in February, leading to the sharpest drop in output since data were first available in 2009.

The flash manufacturing PMI raises a red warning light as to the health of the economy in the first quarter. The manufacturing output index exhibits an 80% correlation with the quarterly rate of change in the official manufacturing production data compiled by the Ministry of Economy, Trade and Industry. With the PMI acting with a two-month lead on the official data, and avoiding some of the undue noise and volatility in the official data, the survey provides a good gauge of the underlying growth momentum and suggests that forthcoming GDP releases could disappoint.

With manufacturing already in decline, the biggest concerns surround the extent of continued repercussions from US-China trade tensions. A further drop in exports would likely restrain capital spending plans and wage increases.

However, while downside risks are increasing, a recession is not yet the baseline forecast. IHS Markit expects Japan's GDP to grow by just 0.7% in 2019 - principally in response to the deteriorating external environment. To achieve this, much will therefore depend on the extent to which the service sector can act as a buffer to the headwind of dampened external demand. More will become evident with the publication of the final PMI data in early April.

However, even this modest expansion is predicated on consumers stepping up their spending ahead of a twice-deferred planned hike in the sales tax from 8% to 10% in October 2019. Pay-back comes in 2020, when we expect economic growth to slow to 0.5% as consumer spending fades again.

For more information about the PMI surveys and the Nikkei PMI for Japan, please contact economics@ihsmarkit.com.