Japan's economy picks up speed in June as services revive, but manufacturing slows and prices surge

The pace of economic growth accelerated in Japan at the end of the second quarter according to the latest business surveys, indicating a strengthening of the recovery from the Omicron-related downturn at the start of the year. However, the economic upturn was uneven, being fueled by rising demand for services while exports fell and factory output growth ground to a near-halt. At the same time, selling price inflation for goods and services hit a new record high, albeit with a mild easing in growth of firms' costs providing a tentative suggestion that the rate of Inflation may soon peak.

Business activity growth picked up in June, rounding off a second quarter which should see GDP growth revive from the mild downturn seen in the opening three months of the year. The au Jibun Bank composite PMI™ rose from 52.3 in May to 53.2 in June, its highest level since last November and the fourth-best reading since the start of 2014. June's improvement pushed the average PMI reading for the second quarter up to 52.2 against 48.7 in the first quarter, signalling a return to growth for the economy after GDP contracted 0.1% at the start of the year. 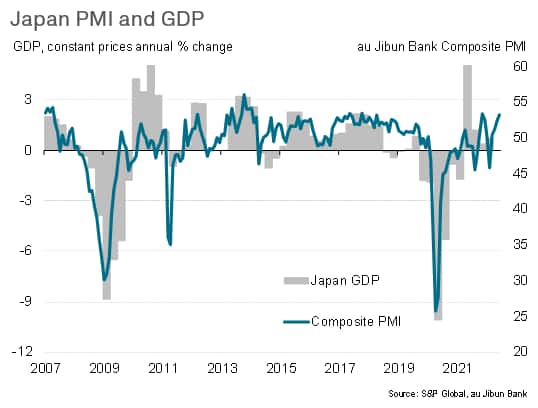 Growth trends diverged by sector. The improvement was led by services, where activity grew at the fastest rate since 2013 due to the recent relaxation of COVID-19 restrictions in the home market. Services exports continued to fall, however, due to persistent pandemic concerns. Manufacturing growth meanwhile slowed to the weakest seen over the past four months, down to a near stand-still, as new orders fell for the first time in nine months to indicate a renewed downturn in demand for goods. Goods exports fell especially sharply, dropping for a fourth straight month in June. 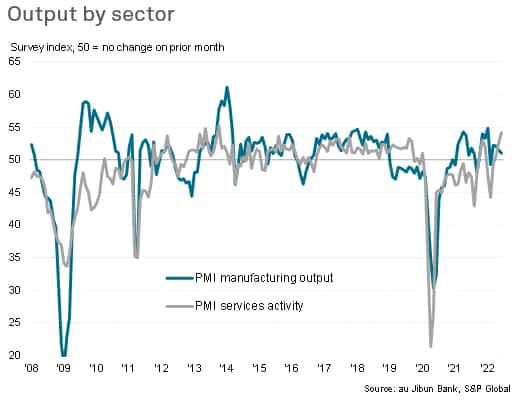 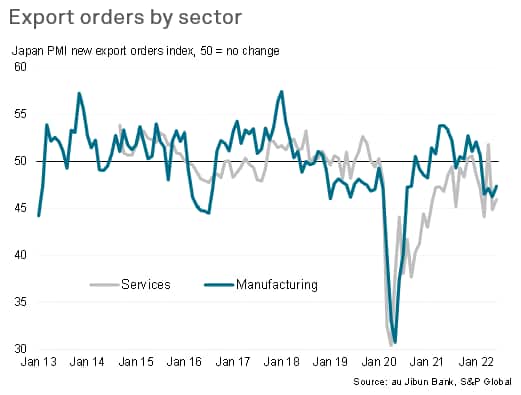 The survey data therefore point to the current expansion being driven primarily by reviving domestic demand for services, with the manufacturing sector close to stalling and overseas demand for goods and services falling.

Manufacturing also continued to be constrained by shortages of raw materials, with suppliers' delivery times lengthening markedly again in June and at one of the steepest rates ever recorded by the survey. Lockdowns in mainland China were commonly cited as a key cause of the ongoing bottlenecks.

A corollary of the ongoing supply shortages was another month of sharply rising raw material prices paid by manufacturers. Although the rate of inflation cooled slightly, it remained among the highest recorded since 2008. 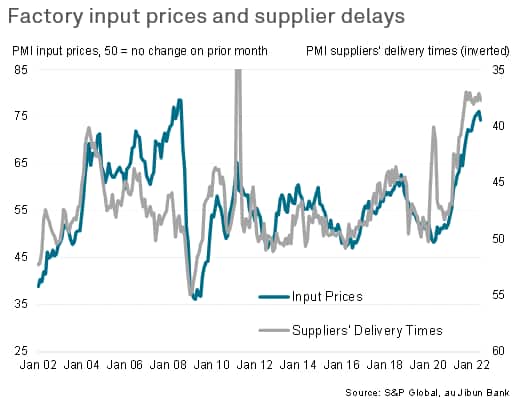 However, while manufacturing input cost inflation eased from May's peak, the rate of increase accelerated in the service sector to the highest recorded since data were first available for the sector in 2007. Companies blamed higher energy and staff costs, in addition to rising raw material prices, for the acceleration in inflation.

Selling price inflation meanwhile accelerated in both manufacturing and services as firms sought to pass their higher costs on to customers. The rate of increase was the steepest on record for manufacturing (the data history for which extends back to 2001) and the sharpest since October 2019 for services. 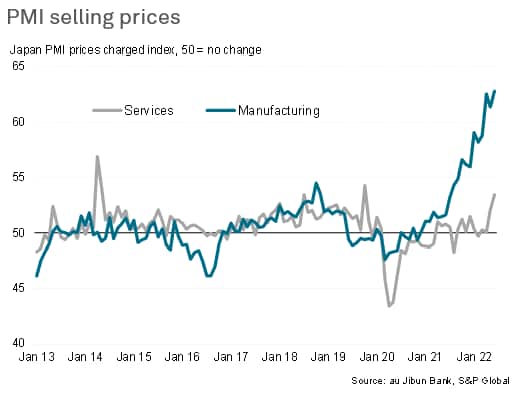 The steep rise in firms' selling prices in June suggests consumer price inflation has further to rise. Headline CPI reached 2.5% in April with the core rate up to 2.1%, the latter exceeding the Bank of Japan's 2% target for the first time since 2015. 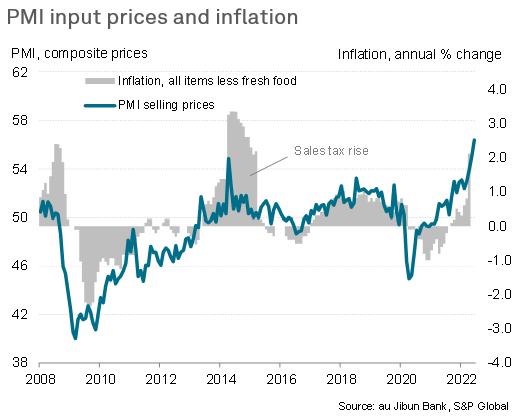 Any hawks at the Bank of Japan will be encouraged by both the sharper pace of economic recovery in June and the further acceleration in firms' selling price inflation. However, any doves could point to the fragility of the demand situation and in particular worrying reliance of the economy on what could prove a temporary rebound in demand for services, which could soon ease as pent-up pandemic demand fades. A key concern is the prospect of a renewed downturn in manufacturing, with June already seeing output growth almost stall and forward-looking indicators such as the orders-inventory ratio turning down further. 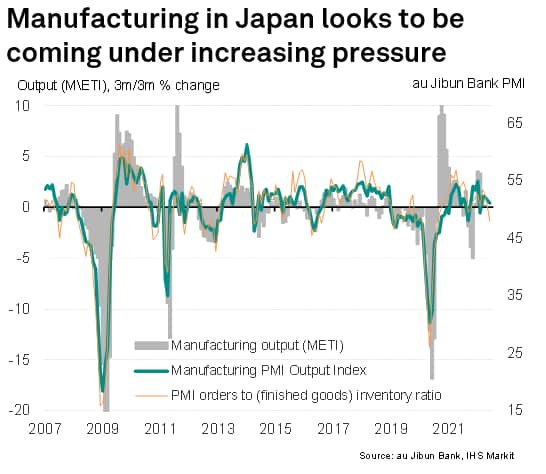