The Japanese private sector economy continued its struggle to gain recovery momentum midway through the fourth quarter, with flash PMI survey data indicating a further decline in business activity during November. The deterioration sets the scene for a subdued economic performance in the final quarter of 2020.

The au Jibun Bank flash Composite PMI, compiled by IHS Markit and based on 85-90% of responses received from the monthly surveys, dropped from 48.0 in October to 47.0 in November. The latest reading signalled a further and faster decline in private sector output across both manufacturing and services.

The data suggest that the pace of recovery is stalling, putting the economy on track for a subdued fourth quarter. At 47.5, the average PMI so far for the fourth quarter is just a mere 1.9 points higher than the 45.6 in the third quarter, far underwhelming the gain of 14.1 points recorded in the three months ending September.

Although recent GDP data showed the economy expanding 5.0% in the third quarter, that followed an 8.2% decline in the second quarter and left GDP still 5.9% below levels of a year ago, underscoring the sluggish recovery to regain pre-pandemic output levels.

Stubbornly weak demand may also limit the extent to which activity rebounds in December. Inflows of new business fell further and at a marked rate in November, reflecting subdued domestic and foreign demand as rising COVID-19 infections in many countries, including Japan, dampened activity.

The survey also indicated a persistent surplus in operating capacity, as reflected by a further drop in backlogs of work, with the rate of decrease accelerating. 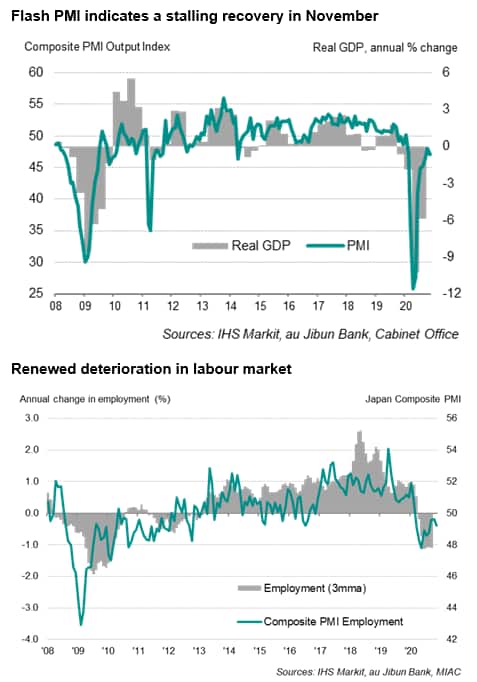 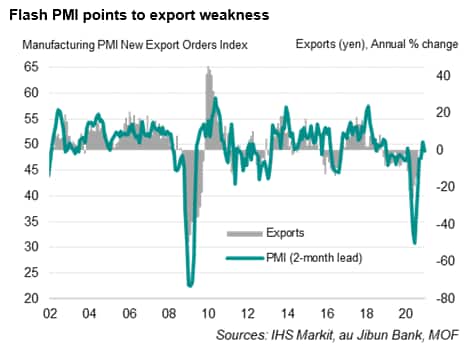 The labour market meanwhile also deteriorated in November amid weakening sales and rising spare capacity, representing a setback to the recent move towards stabilisation signalled by the PMI's employment index. The decline in overall employment accelerated from October, with the service sector seeing a renewed fall in workforce numbers.

Factory employment continued to shrink, albeit marginally. Anecdotal evidence indicated that factories commonly reduced their headcounts or opted not to replace voluntary leavers in response to falling output.

Amid efforts to fight for sales, firms across both manufacturing and service sectors increasingly offered price discounts. Overall output charges fell for a ninth straight month as a result, with the rate of decrease hitting the fastest since August. 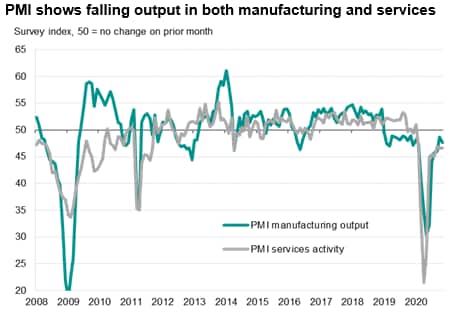 Looking ahead, the path to recovery remains fraught with challenges, notably as a recent rise in local infections could re-ignite cautious consumer behaviour alongside a subdued labour market and a weak outlook for wages. Reintroduced lockdown measures in many countries due to second waves of new COVID-19 cases could also weigh on foreign demand for Japanese goods and services.

Although Japanese private sector firms have become more optimistic about earnings projections, uncertainty of the pandemic trajectory, even with improved progress on the vaccine front, alongside balance sheet adjustments and the appreciation of yen could continue to weigh on capital investment.

Final PMI survey data for Japan will be released on 1st and 3rd December for manufacturing and services respectively.