Japan's manufacturing economy remained stuck in a downturn at the start of the second quarter as the global trade slowdown continued to take its toll on the country's exporters. The ongoing decline in manufacturing activity raises questions over the prospects of the economy amid global growth risks and a planned sales tax hike scheduled for later in the year.

According to flash estimates, the Nikkei Manufacturing PMI for April rose to 49.5 from 49.2 in March. With 50.0 being the no-change level between growth and decline, April's flash PMI reading signalled an ongoing deterioration of manufacturing conditions during the month, albeit with a weaker rate of contraction evident.

The headline PMI is a composite indicator derived from various survey sub-indices. The Output index signalled a fourth consecutive monthly fall in manufacturing production, while the new orders index pointed to another reduction of new business inflows. While the rates of contraction in both indices were slower than in March, the downturns remained steep. Firms cut back on input purchasing and scaled down stock holdings in line with reduced order book growth. 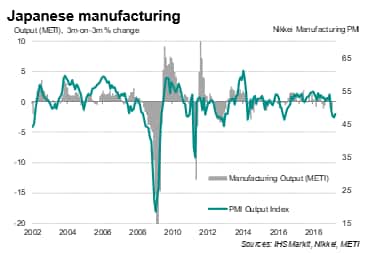 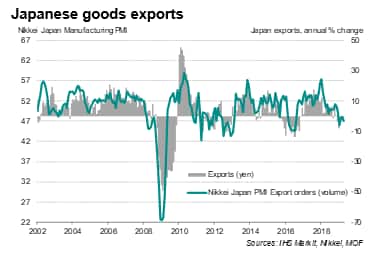 The driving force behind the manufacturing downturn was a persistent deterioration in export orders, which fell for a fifth consecutive month in April, dropping at second-steepest rate for over two-and-a-half years.

Particular stress was seen in key Japanese industries, such as electronics and autos. Japan has the world's third largest industries in electronics as well as autos. The country is also the fourth largest export market for semiconductor manufacturing equipment. But these sectors have seen demand drop sharply in recent months.

The global electronics PMI, compiled by IHS Markit, had signalled a further decrease in new order intakes in March, while detailed sector PMI showed an ongoing downturn in global auto production, with new orders falling for the sixth month running during March.

The PMI has acted as a reliable gauge of the health of the Japanese economy and such a weak reading added to gloomy prospects for economic growth in 2019.

IHS Markit's outlook for Japan's GDP growth is 0.7% in 2019, followed by a slowdown to 0.5% in 2020, primarily reflecting global uncertainty in trade conditions.

The flash manufacturing PMI continued to raise a red flag at the start of the second quarter, however two PMI sub-indices provide hopes that the weakness may find a floor. First, factory headcounts continued to grow, rising at the fastest pace in five months during April. Second, business confidence picked up to a four-month high. This could have reflected rising optimism that the US and China are nearing a trade deal, which would greatly soothe global trade risks. 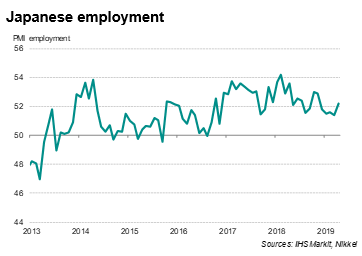