The downturn in Japan's private sector economy gained momentum in April, with business activity slumping to the greatest extent on record, according to flash PMI data. The headline au Jibun Bank flash PMI plunged 8.5 points to 27.8. Stricter rules to limit the spread of COVID-19 has cut a swathe through demand, with new business inflows falling steeply which, in turn, led to a severe fall in backlogs of work. Business sentiment also plummeted to the lowest in the survey history, adding to expectations that the downturn has much further to run.

In particular, there could also be additional economic damage, especially to the service sector, if the government decides to extend its month-long state of emergency, although the large-scale stimulus package may offset partially the adverse impact to activity. 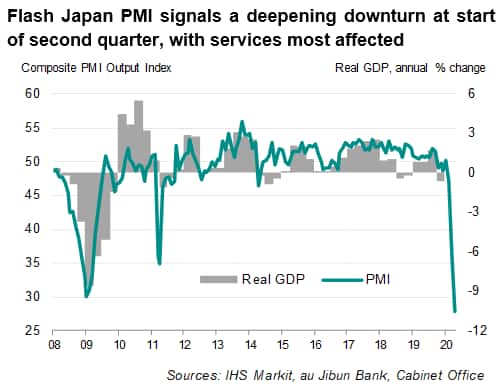 The economic downturn was again led by the service sector, which has been the most affected by the coronavirus disease 2019 (COVID-19) outbreak as social distancing rules hit a wide range of service-related sectors, including financial services, consumer services, transport, hotels and restaurants. The contraction of services activity was at a new record pace in April amid cancellations, business closures and slumping demand. The level of new sales also fell at a rate not previously recorded since data on the service sector were first collected in 2007.

The manufacturing sector meanwhile also suffered further damage, driven by a near collapse in demand (notably from overseas) as well as ongoing supply chain disruptions. Production volumes fell for a sixteenth straight month, dropping at the fastest rate since the 2011 earthquakes. This was accompanied by the steepest fall in new orders since the height of the global financial crisis in March 2009, weighed down also by the sharpest drop in export sales for 11 years. Business sentiment among manufacturers also fell to the lowest since data were first available. 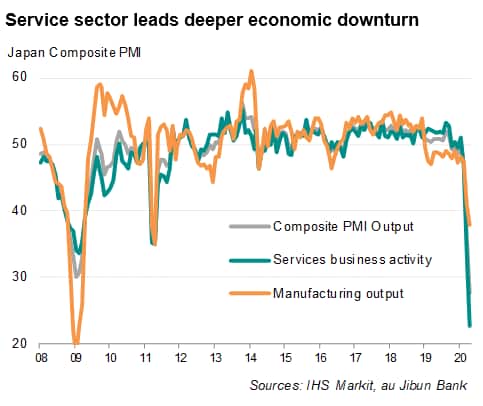 Input costs paid by Japanese businesses fell for the first time in over three-and-a-half years in April, with the rate of decrease the steepest since late-2009. Lower business expenses were reportedly weighed down by the collapse in global commodity prices, especially oil. This was joined by the steepest fall in prices charged for Japanese goods and services for almost a decade. Service providers reported a deeper decline in fees than manufacturing charges, with firms reportedly giving large discounts to boost sales amid the pandemic outbreak. 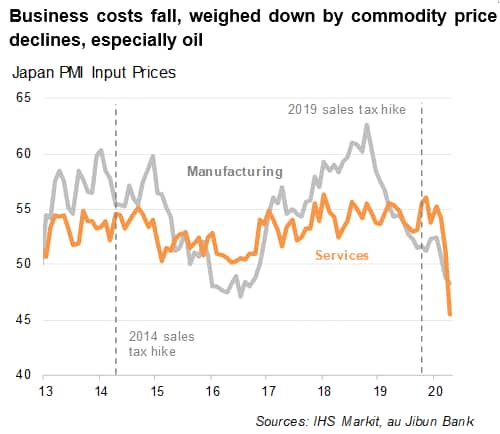 Pessimism among Japanese firms meanwhile intensified in April as the COVID-19 situation remained challenging. Business expectations for the year ahead fell sharply to the lowest since data for this survey variable were first available in 2012. Business confidence for both the manufacturing and the service sectors sank to the lowest in their respective survey histories. The virus crisis was the dominant concern cited by respondents.

The government has announced a massive stimulus package worth JPY117 trillion (about 20% of GDP), including cash handouts and loan support programmes, to combat the effects of the virus pandemic. While the emergency stimulus package is welcome by many - and the size of the plan unprecedented - it is unlikely to fully offset the damage caused by the COVID-19 outbreak, especially if the pandemic is prolonged. IHS Markit expects Japan's economy to shrink by 3.3% in 2020. 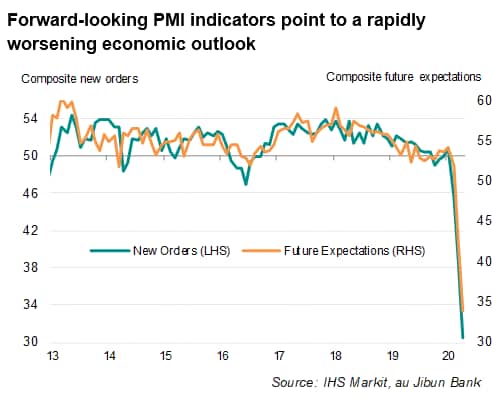