Japan imported marginally less barrels of Saudi Arabian crude oil in September than in the previous month. This trend is expected to last, as current data by IHS Markit Commodities at Sea suggests that Japan won’t import more than one million b/d of Saudi Arabian crude in October. Overall Japanese imports have declined in September, having reduced to 2.83 million b/d. There’s a marginal increase expected for this month, but total imports are expected to remain below three million b/d. 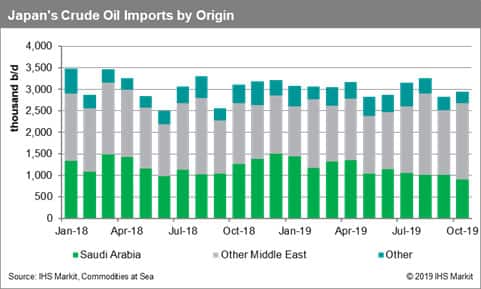 Saudi Arabia’s market share in Japanese imports of crude oil will likely drop further, closer to 30%, levels last seen in August. Despite the volatility in the chart below, the message is clear, Japan seems to be relying less on Saudi Arabian barrels. Meanwhile, it is fair to assume that Saudi Arabia might be trying to export more to other countries, such as China, with less barrels left for Japan to import. Saudi Arabia’s share of Japanese crude oil imports averaged 44% between November 2018 and April 2019 but is set to drop to 35% during the last six months (including October 2019). The share of other Middle East Gulf exporters has followed the opposite trend, having reached an average of 52% in the last six months, against a share of 43% in the period between November 2018 and April 2019. 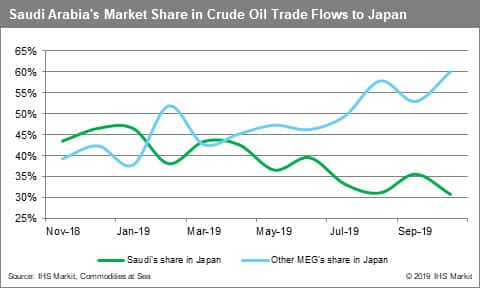 Saudi Arabia’s heavy sour crude oil grades must have seemed expensive to several refiners of Japan, making lighter barrels from the UAE more appealing. The tightening supply of heavy grades, in parallel with US sanctions on Iran and Venezuela, made Japanese refiners quickly switch part of their demand away from Saudi Arabia in August. The gap has been filled primarily by the UAE, with year-on-year growth of almost 10% during the last couple of months. The Japanese market has been relying more and more on light sour Murban and Das crude, with significant additions in other grades such as light sour Umm Lulu.

The voyage from the Middle East Gulf to Japan typically takes 25-30 days, which means that the drone attacks in Saudi Arabia in September might start having some impact in Japanese imports from the second half of October, which could push Saudi Arabia’s share even lower. Japanese refiners have been assured that Saudi Arabia cargoes will arrive on time, but it’s not yet clear whether sentiment might have affected the preferences of purchasers, with any impact only observed beyond November. Saudi Aramco is understood to be able to recover most of the losses, but mostly with additions of heavy barrels. The company might face difficulties in fulfilling term commitments for lighter barrels.

The UAE, together with other producers across the Middle East Gulf, such as Qatar and Iraq, have been strengthening their shares in Japan, after the suspension of Iranian oil imports since early May. Japan has also been importing more barrels from the US and Russia, while interest of Japanese refiners has been increasing for other crude oil grades coming from Ecuador, Gabon and Australia.

Kuwait, whose flows to Japan suffered a sharp decline in August, for the first time in seven months, seems to have recovered in September. However, barrels from Kuwait currently on the water and heading to Japanese ports do not seem enough for another sharp decline to be avoided in October.

Japan’s refiners have also been preparing for IMO 2020, having already started supplying 0.5% sulphur bunker fuel oil. The IMO-compliant bunker fuel oil is now available at most Japanese refineries. Meanwhile, the country’s clean products demand has been recently rising quickly following the country’s tax hike on the 1st October, from 8% to 10%.