Japan stuck in downturn as manufacturing hit by trade woes

Flash PMI data showed business activity in Japan's private sector contracted sharply again in June despite an easing of emergency measures taken to limit the COVID-19 pandemic. While the downturn slowed further from April's record decline, the Japanese economy continued to struggle amid the collapse of global demand for trade and tourism, adding to fears that the slump may extend into the third quarter. Deflationary pressures meanwhile persisted as a result of further deterioration of demand in the economy.

Signs of a recovery were elusive as business sentiment about the year-ahead outlook remained pessimistic on balance. 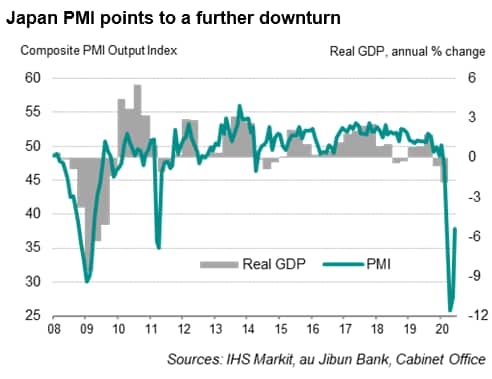 The headline au Jibun Bank flash Composite PMI, compiled by IHS Markit and covering manufacturing and services, rose 10 index points from 27.8 to 37.9 in June, the highest level since February. However, by remaining well below 50, the latest figure signalled a further marked decline in private sector output at the end of the second quarter.

The average second quarter PMI reading indicated that the Japanese economy has fallen into a deeper recession, with forward-looking indicators hinting of further economic decline in coming months.

While the lifting of the state of emergency in late-May provided some relief to the domestic sector - where the downturn in services activity eased considerably during June but nonetheless stuck in decline - Japan's growth continued to be adversely affected by subdued export demand and restrictions on travel. 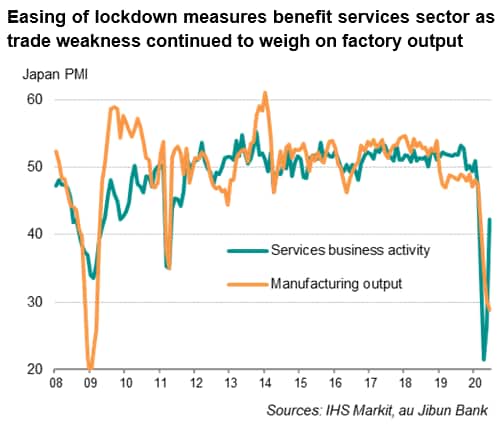 The global trade downturn continued to weigh especially heavily on Japan's manufacturing sector. Survey data showed manufacturing production fell substantially in June, with the rate of decline the fastest since the height of the global financial crisis in March 2009. Factories continued to cut output in response to a further sharp fall in new orders. Foreign demand for Japanese manufactured goods remained weak, with the latest decline in export sales among the quickest for over 11 years amid global trade weakness.

The downturn in services activity meanwhile eased notably from May as more businesses resumed operations thanks to the lifting of lockdown measures. However, social distancing rules and travel restrictions continued to hold back the recovery of the service sector. Inflows of new business continued to fall, albeit at a much weaker pace than seen during the lockdown months. New export business fell for a fifth straight month, linked to the collapse in tourism. 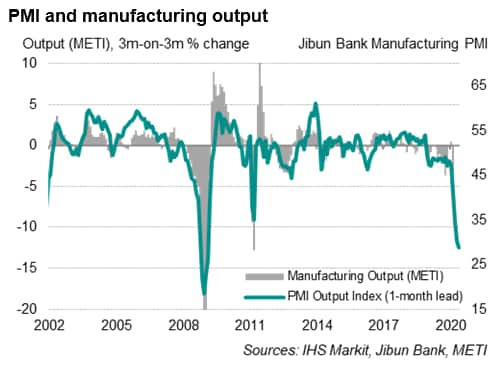 As the economy remained mired in a deepening downturn, companies sought to contain costs and survive the pandemic by cutting jobs. Overall employment was reduced for a fourth consecutive month during June, although the rate of decrease was only marginal. Job losses primarily stemmed from the manufacturing sector, where the rate of reduction in staff numbers re-accelerated in June. In contrast, survey data showed signs of stabilisation in the service job market, with employment levels broadly unchanged in June, following a three-month period of decline.

Deflationary pressures persisted in June, with both input and output prices falling further. Firms continued to reduce their selling prices to stimulate demand, with the rate of decrease remaining steep overall. Input costs meanwhile dropped only marginally, with anecdotal evidence of higher freight fees and greater raw material prices due to shortages of inputs such as electronic components partially offsetting the weaker fuel prices and lower labour costs. 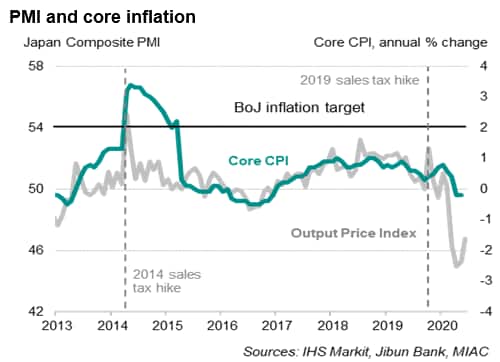 Despite the easing of COVID-19 restrictions, the survey data showed no signs of robust recovery in the months ahead. The potential for a second wave of infections, coupled with ongoing global trade woes and protracted international travel restrictions could further delay the revival of economic growth.

Indeed, Japanese firms remained pessimistic about the year-ahead business outlook, highlighting concerns over the uncertainty of the pandemic duration and weak economic conditions. What is perhaps more worrying is that a prolonged downturn could lead to increasing numbers of bankruptcies and job losses, both of which will weaken the economy's ability to recover.