Flash PMI data indicated a further decline in Japanese economic activity in August, sending a warning signal that the recovery is lacking momentum. Subdued international trade and enforced social distancing practices continued to weigh heavily on demand, underscoring the challenging conditions in which many businesses across the manufacturing and service sectors operated.

With an increasing number of headwinds facing Japan's economy, including rising unemployment and uncertainties surrounding the duration of the pandemic, the downturn is likely to persist throughout the coming months.

The headline au Jibun Bank flash Composite PMI, compiled by IHS Markit and based on 85-90% of responses received from the monthly surveys, came in at 44.9 in August, unchanged on July. By remaining below 50, the latest figure, which measures activity levels at both manufacturing and service sector companies, signalled a further marked decline in private sector output.

The average PMI so far for the third quarter (44.9) points to a further contraction of the Japanese economy, albeit at a slower rate of decline when compared to the previous quarter.

The lifting of emergency measures since late May and subsequent reopening of businesses had eased the downward pressure on the economy, suggesting that the worst of the initial impact of the coronavirus disease 2019 (COVID-19) pandemic was seen in the second quarter. However, a robust recovery remains far off due to a combination of factors; lower corporate profits, concerns about a resurgence of new infections, and still-subdued global trade flows which continue to dampen a recovery of consumption and investment, and in turn, hinder a swift turnaround in Japan's growth. The tri-annual Japan Business Outlook survey (published in July) showed weaker intentions for hiring and capital spending in the year ahead.

The flash PMI survey also showed companies reporting a further weakening of demand during August. In fact, the rate of decline in new orders quickened from July, though it was not as severe as that seen during the depth of the COVID-19 downturn from March to May. 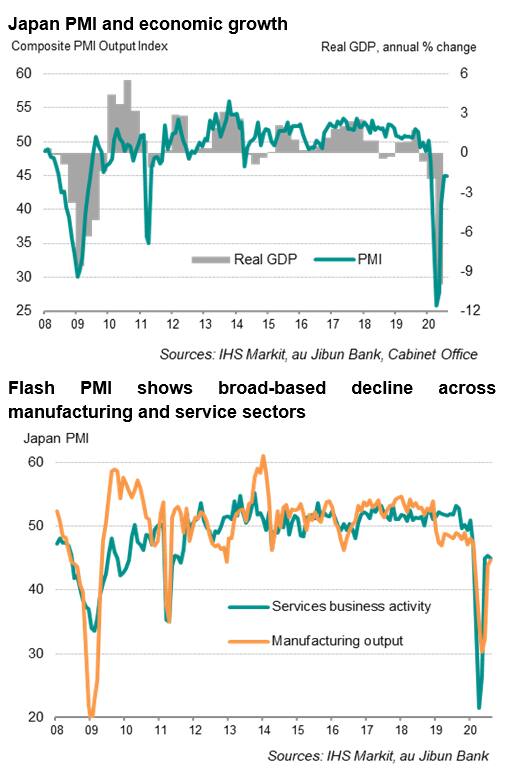 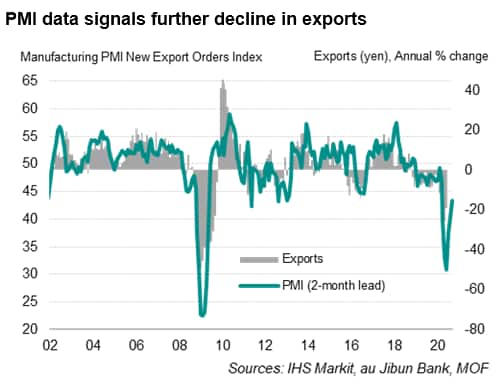 Broad-based decline in activity and jobs

The downturn continued to be led by the manufacturing sector. While the softest since February, the rate of contraction in factory production was still steep during August. The reduction of output was driven by weakening demand for Japanese manufactured goods both home and abroad, as reflected by a further sharp fall in total new orders. That said, some firms that reported increased export sales highlighted improving demand from Asian economies.

Meanwhile, conditions in Japan's labour market continued to deteriorate, with job shedding persisting across both monitored sectors. Survey data showed employment falling for a sixth consecutive month during August, with the rate of decline the fastest since May. 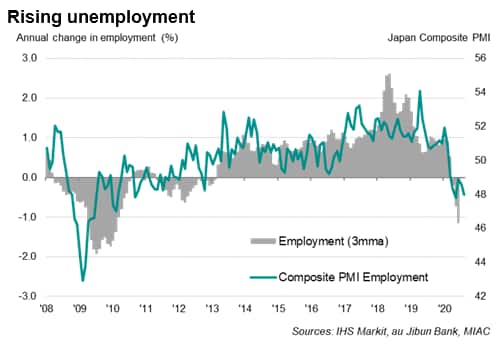 With the downturn stretching into the middle of the third quarter, and amid few signs of economic revival, Japanese companies expect output to fall in the year ahead. This was reflected by the Future Output Index, the PMI's gauge of business confidence, falling back below the neutral 50.0 level in August. The paucity of demand in domestic and overseas markets contributed to an ongoing fall in backlogs of work, and bode ill for business activity in the coming months. A consistently weak recovery would raise the call for additional fiscal support, particularly if the COVID-19 situation worsens and natural disasters strike.

IHS Markit now expects the Japanese economy to contract by 5.7% on an annual basis this year, reflecting export declines and delays in the distribution of government stimulus, including cash benefits.