However, the survey also revealed some bright spots amid a sluggish recovery. The labour market stabilised in October and business sentiment strengthened to the most optimistic for over two years, with service providers in particular increasingly upbeat about prospects.

The au Jibun Bank flash Composite PMI, compiled by IHS Markit and based on 85-90% of responses received from the monthly surveys, came in at 46.7 in October, broadly unchanged on 46.6 in September. The index signalled a further marked decline in private sector output across both manufacturing and services but with the rate of decline easing marginally and the slowest since February, prior to the escalation of the global pandemic outbreak.

The latest survey data suggest that the pace of recovery is not only slow but failing to gain momentum. The average PMI rose 14.1 points from 31.5 in the second quarter to 45.6 in the third quarter, but stubbornly weak demand may limit the extent to which activity rebounds in the fourth quarter. Intakes of new business fell further in October, reflecting subdued domestic and foreign demand due to cautious consumer behaviour, weakened firms' balance sheets and a global resurgence of infection cases. Operating capacity also remained in surplus, as reflected by a further rise in backlogs of work, although the increase was the slowest for eight months.

The survey revealed some positive signs, however. First, employment was broadly stable in October, with workforce numbers in both manufacturing and services largely unchanged from September. Second, business sentiment improved to the strongest for over two years, rising especially among services firms. In fact, the level of optimism in the service sector rose to the highest since February 2019. 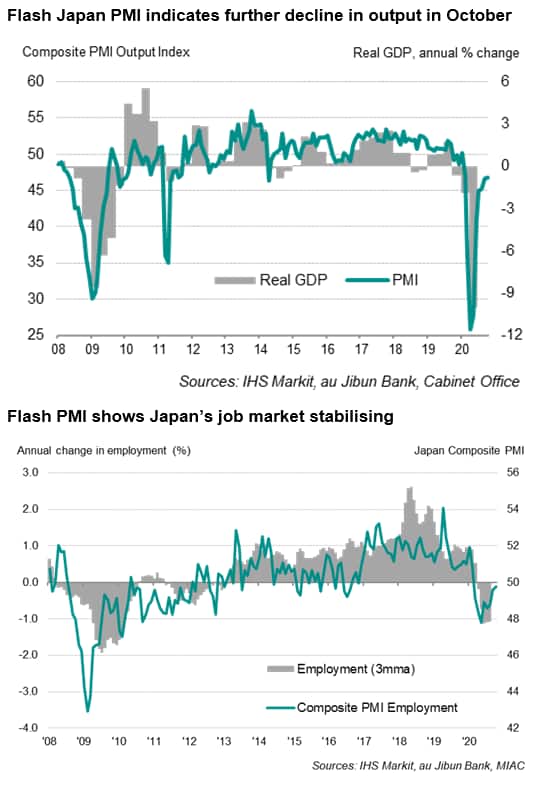 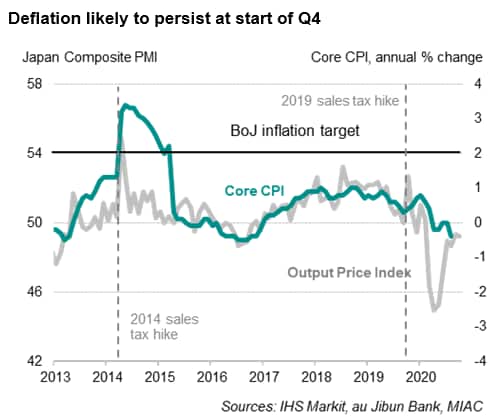 Subdued inflationary pressures persisted at the start of the fourth quarter. Having been relatively unchanged in the past two months, input costs rose marginally during October, but the rate of increase, particularly in import-related expenses, was restrained by a stronger yen.

While manufacturers reported a rise in input prices, services firms saw a further decline due to reduced expenses linked to social distancing restrictions. With greater competition amid a weak business environment, firms reduced their selling prices to boost sales.

The recovery of business activity in Japan continues to be slow-going and could remain so in the coming months amid an absence of a robust revival in demand. A number of headwinds also threatens to undermine the economic progress made so far, including a global resurgence of COVID-19 cases (which would weigh on Japan's external-facing sectors), weak household income and declines in corporate profits.

With the recovery gradual, and facing substantial downside risks, there would be increasing expectations of the government to provide additional fiscal support, with the aim to provide aid to firms and workers, as well as stimulating demand. Anecdotal evidence from PMI survey data indicated that the government's 'Go to Travel Campaign' had encouraged domestic travel and provided a much-needed boost to the tourism sector which has been greatly affected by international travel restrictions and border controls. 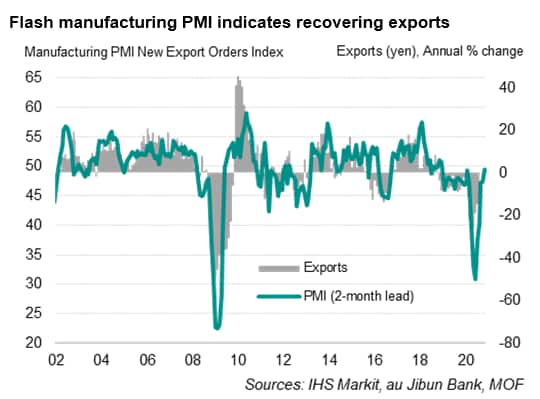 The final Japan PMI data will be published on 2nd November (manufacturing) and 5th November (services and composite).