Business activity growth in Japan was subdued during March, recording the slowest expansion for two-and-a-half years amid a steepening manufacturing downturn. The weakness of the surveys suggests that the economy may struggle to grow in 2019.

The Nikkei Composite PMI Output Index slipped from 50.7 in February to 50.4 in March, indicating only marginal growth. March's reading was the lowest since September 2016.

The latest reading is consistent with the Japanese economy near to a flat annual rate of growth. 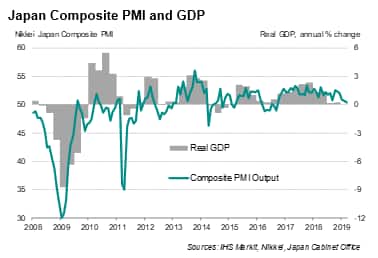 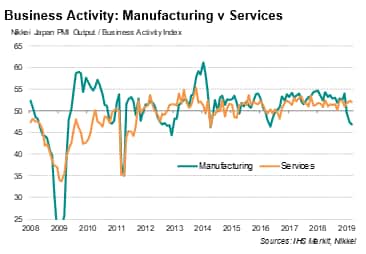 The subdued survey data imply that economic growth could disappoint in the first quarter. At 50.6, the average PMI reading for the first quarter had been the lowest since the third quarter of 2016 and indicative of the Japanese economy having slowed notably.

The soft start to the year in turn suggests the economy could struggle to grow over the whole of 2019 especially in the face of increasing headwinds from global trade uncertainty and a forthcoming (and twice-deferred) sales tax hike.

For now, the growth slowdown shows few signs of letting up, not helped by a further decline in Japan's new export business in March, marking the fourth consecutive monthly drop in overseas sales. The export struggle mainly reflects the weakness of manufacturing goods shipments, which is linked to a slowing global demand and the easing of the tech cycle.

The deteriorating export picture contributed to the Japanese manufacturing economy suffering its worst decline in production for 34 months during March, according to the Nikkei PMI data. 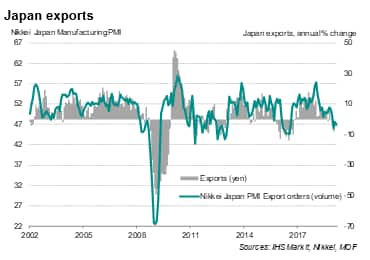 Despite softer demand, cost pressures remained solid. Manufacturing input prices continued to rise at a marked rate and above its historical average. Likewise cost inflation in the service sector remained among the strongest seen since the heights of the global financial crisis, in part reflecting higher wages and fuel costs. 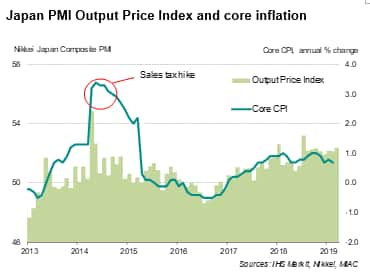 The weakness of external demand was offset by the domestic market. Growth in the service sector, a proxy for domestic consumption, remained well above its long-run series average. Moreover, new business expansion continued to be solid, thereby supporting overall economic activity.

However, there are concerns that a protracted manufacturing downturn would spread to services, which have so far acted as a buffer against the impact of external headwinds. The question now is how long it can remain in this role should the external downturn gain momentum.