Business activity in Japan received a boost from pent-up demand at the start of the fourth quarter. The latest Nikkei PMI data showed a rebound in growth, buoyed by a return to normal business for many companies in October after recent adverse weather conditions.

The survey also brought signs of a stronger build-up of inflation pressures, though many of the factors were external.

The Nikkei Japan Composite PMI™ Output Index rebounded to 52.5 in October from a two-year low of 50.7 in September. The latest reading indicated a faster rate of growth of business activity in the economy, commensurate with annual GDP growth of approximately 2%.

The output expansion in October was the strongest for six months, with faster growth reported within both manufacturing and service sectors. However, anecdotal evidence suggested that a notable contribution came from a normalisation in operations after recent typhoon-related disruptions.

The combined September and October readings, which arguably offers a better insight into the underlying trend of economic growth, point to a more subdued pace of just over 1%.

The boost to growth was more apparent in the service sector, where business activity grew at the second-fastest pace in a year (surpassed only marginally in April). New business placed at service providers increased by the greatest extent for nearly five-and-a-half years. 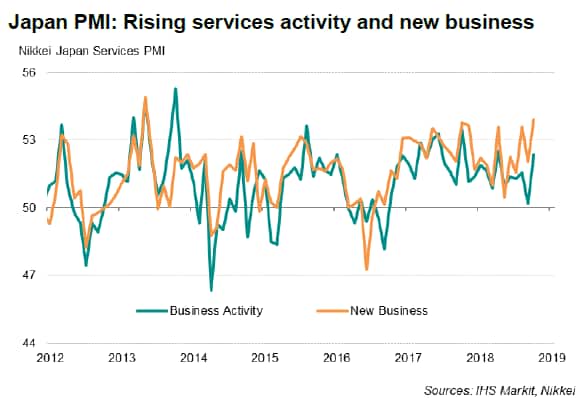 November PMI data are therefore crucial to assess whether the stronger growth in October is primarily driven by the post-calamity recovery.

A brief respite in exports?

Another bright spot in the survey was the revival of export sales. After four months of sluggish export performance, foreign orders increased in October, providing a positive development amid a period of growing trade tensions between the US and China.

However, a note of caution should be struck. Evidence suggested that at least some of the export rebound was linked to the calmer weather. Furthermore, the business impact of trade wars and tariffs on Japanese manufacturing remained a key concern, which also contributed to pushing business expectations about the year ahead near to a two-year low.

Input costs rose at the strongest rate for a decade during October, but firms only managed to partially shift some of the cost burdens to customers, thereby straining profit margins. Output charges increased modestly and close to recent rates. As highlighted in a previous note, a markedly higher level in the PMI's measure of output prices for goods and services (around 54) needs to be seen for core inflation to reach the 2% target. 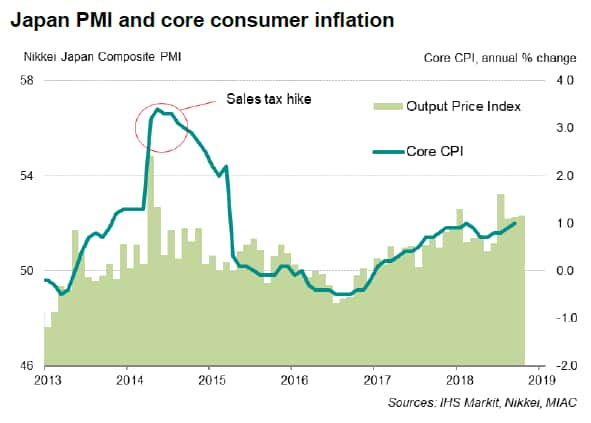 Achieving an inflation rate of 2% has been a key policy goal for the Bank of Japan (BOJ) since 2013. Therefore, rising inflationary pressures are viewed positively. However, the survey data underscored how the drivers of inflation have so far been mostly exogenous, such as higher global commodity prices, particularly oil. The depreciation of the yen also aggravated imported inflation.

With inflation remaining stubbornly subdued, the BOJ maintained its monetary policy stance at the latest meeting in October and trimmed its inflation projections. Notably, the Bank voiced stronger concerns that ultra-low rates are hurting bank profits and discouraging lending. Recent measures undertaken by the BOJ were aimed at reducing negative policy effects, but more may be needed if inflation continues to undershoot target, including removing the hard inflation target and widening the tolerance band for government bond yields (or even getting rid of the band).