The Japanese economy continued to enjoy steady growth midway through the closing quarter of 2018, suggesting the economy will rebound after a weather-related decline in the third quarter. However, the latest Nikkei PMI data indicate that the boost from post-typhoon demand is waning, hinting that growth could slow in coming months. Cost inflation meanwhile remained strong in November, but selling price inflation was once again muted. 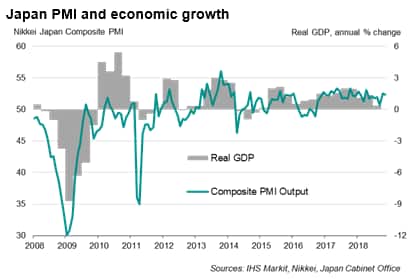 Resilient growth but risks ahead

The Nikkei Japan Composite PMI™ Output Index came in at 52.4 in November, close to October's post-typhoon rebound of 52.5. The latest data brought the average reading so far in the current quarter to 52.4, up from 51.5 during the third quarter, indicating faster growth of business activity and setting the scene for stronger GDP numbers in the final quarter of 2018.

However, there could be downside risks to the outlook, with the survey also bringing signs of slower output growth in coming months. Furthermore, even though client demand continued to expand, albeit modestly, the PMI data showed that firms' operating capacity remained underutilised, as indicated by a third consecutive month of lower backlogs of work. Perhaps of greater concern is that the November data implied that the pent-up demand driving manufacturing activity in October appeared to be petering out. Growth in manufacturing sales was noticeably slower than October and among the weakest for two years during November. There was also little support from external markets. While still growing, export orders rose at only a marginal rate amid reports of increasingly tough global trade conditions.

Furthermore, manufacturers' optimism waned further, with the Future Output Index slipping for a sixth straight month to reach its lowest for two years. With US-China trade tensions weighing on global trade conditions, Japanese manufacturers are expected to face even tougher challenges in export growth in the months ahead.

In contrast, the performance in the service sector demonstrated greater resilience, with growth remaining above the average over the first nine months of the year. However, even in the service sector the expansion of new business was slower than in October and future optimism edged down to a 15-month low.

A newly-launched index of service sector exports fell into decline for the first time since September of last year, acting as a drag on new business growth and offsetting some of the strength recorded in domestic demand. Measured across goods and services, the survey indicated the second-worst export picture seen over the past two years. Companies were often able to pass some of the cost rises on to their clients. However, the PMI Output Price Index remained noticeably below 54, which we see as a key level that is consistent with the Bank of Japan's 2% target for core consumer price inflation.

That said, there is some positive price development in the services sector. Reports from survey respondents suggested that improved domestic demand conditions for Japanese services were supportive of price increases, auguring well for the Bank of Japan that demand-pull inflationary pressure could be developing, at least, in the services segment of the economy.