The Japanese economy gained growth momentum in June, according to Nikkei PMI surveys, ending the second quarter on a stronger note. Other survey indicators suggest economic activity in coming months is likely to stay robust.

The Nikkei Japan Composite PMI™ Output Index rose from 51.7 in May to 52.1 in June, indicating a modest improvement in the rate of growth of business activity in the economy.

The average Composite Output Index reading for the second quarter is slightly higher than the average in the first three months of 2018, allaying concerns, to some extent, about spluttering economic growth, as indicated by the GDP decline in the first quarter. 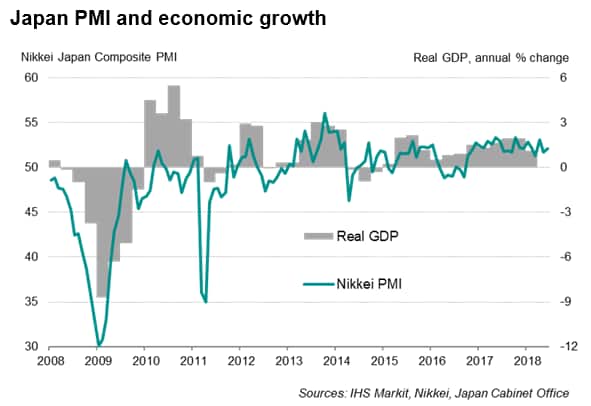 June survey data suggest that output growth could strengthen further in July. Growth in new business intakes accelerated from May, while backlogs of orders across manufacturing and services combined returned to growth, which would usually encourage firms to raise output in coming months. While dipping, business confidence relating to output remained upbeat and above the historical average.

The manufacturing sector remained the main driver of economic output, continuing to outpace growth of services activity, but also faces the greatest risks as far as performance in the second half of the year is concerned. There are two developments in the manufacturing sector that could weigh on future growth. Firstly, export sales fell for the first time in nearly two years, reflective of cooling world trade conditions in recent months.

Secondly, high demand for inputs continued to put pressure on supply chains, resulting in widespread material shortages. The extent of the deterioration in average lead times remained marked and greater than the historical trend. Anecdotal evidence revealed that delivery delays had in some cases resulted in lost sales.

Overall input cost inflation remained solid and well above the historical average, but firms raised selling prices only modestly. While a sustained increase in charges was generally encouraging, especially when the historical average has been one of deflation, the inflation pace remained underwhelming given the high degree of rising cost pressures. 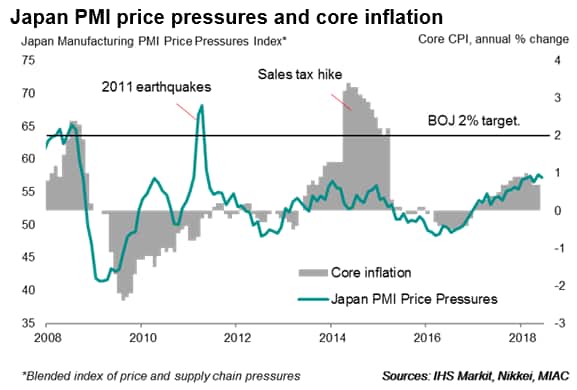 The survey data therefore do little to change the view that, despite five years of aggressive (and unconventional) monetary policy, the Bank of Japan is no closer to reaching its 2% inflation target. The core CPI rose 0.7% year-on-year in May. With subdued inflation, the central bank is widely expected to continue with its ultra-accommodative policy for the time being, but there are concerns about the increasing cost of prolonged easing, especially the damage of near-zero rates on bank profits. This conundrum could elicit another unconventional policy move from the BOJ. The central bank deputy governor Masayoshi Amamiya recently said he would not rule out a policy adjustment if it is necessary to achieve its price target. As such, the outcome of a quarterly inflation review at the July policy meeting will be eagerly awaited.

Learn how to access and receive PMI data
© 2018, IHS Markit Inc. All rights reserved. Reproduction in whole or in part without permission is prohibited.