The au Jibun Bank Flash Japan Composite PMI, compiled by IHS Markit and published ahead of the final PMI results, indicated Japan's private sector shrank for a second straight month and at a faster pace in June. Manufacturing output notably slipped back into contraction after growing for four consecutive months while services output fell for the seventeenth month in a row. 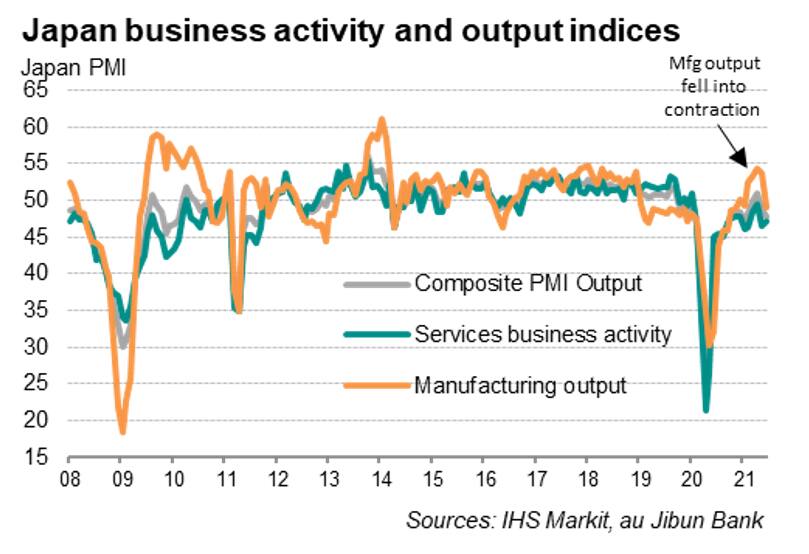 The extension of the state of emergency into June contributed to the decline in output, particularly for the manufacturing sector. At the same time, anecdotal evidence also found many manufacturers suffering supply delays for parts, notably including semiconductors. As a result, even though new orders continued to improve from May, albeit marginally, manufacturing output was dragged into contraction.

Meanwhile services business activity continued to shrink, though at a slower rate in June. Demand, including foreign orders, remained lacklustre, one month ahead of the Tokyo Olympics. While overseas spectators had long been determined to miss the event, it remains to be seen what the 10,000 domestic fans per venue, announced June 21, will do for services performance.

The PMI data come on the heels of the Bank of Japan (BOJ) having left its monetary policy settings unchanged in the recent June 17-18 meeting, in line with expectations. The central bank also made an earlier than expected announcement for the extension of its pandemic relief program beyond the September deadline by six months, to March 2022. Although the extension had been widely expected, the timing of the announcement reaffirms the urgency to reassure the Japanese economy which remains weighed down by the fourth COVID-19 wave. 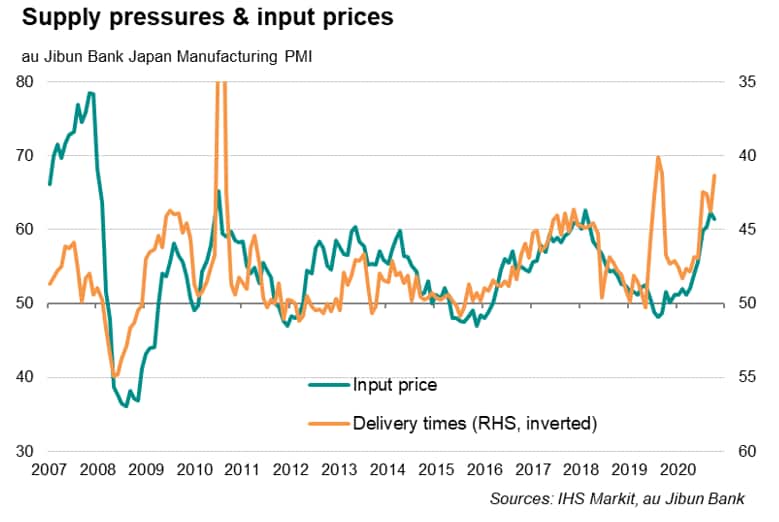 Zooming into the Japanese manufacturing sector performance, the flash PMI sub-indices continued to reflect the issue of supply constraints and price pressures in June. This continues to affirm our view that output for Asia economies, such as Japan, may be further hampered by these supply issues.

As shown above, the rate of industrial input price growth remained at elevated levels compared to historical data in June even as it eased marginally from May. Meanwhile lead times worsened, lengthening at the fastest rate since May 2020. IHS Markit continues to view supply-chain disruptions and higher commodity prices as key issues adversely affecting production momentum going forward, even as vaccine rollouts play their part to support the recovery. 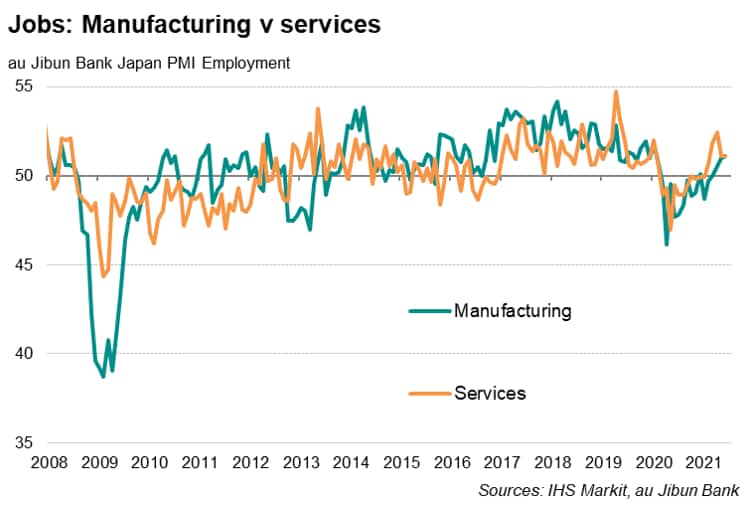 The most positive indications from the June flash PMIs meanwhile were the employment and future output sub-indices. Job creation was reported for a fifth straight month across the private sector as a whole, with manufacturing seeing the fastest increase in staffing levels since January 2020. Despite manufacturing output dipping into contraction territory in June, limited by the abovementioned issues, firms continued to expand their operating capacity in anticipation of a future pickup in demand.

At the same time, firms grew more optimistic with regards to the next 12-month output on a broad level. These are reassuring signs, despite the extension of the state of emergency through to the majority of our June survey period. Many firms cited hopes for the COVID-19 situation to take a turn for the better. Indeed, Japan's fourth COVID-19 wave was seen tapering off into June and vaccination progress had picked up noticeably, with 17.8% of the population receiving at least one dose as of June 20th. This is expected to extend to about 30% by end of July, around the Olympic commencement, according to Economy Minister Yasutoshi Nishimura.

As far as our IHS Markit Japan COVID-19 containment index suggests, things may improve into July. This is, however, barring any unexpected worsening of the COVID-19 situation with the increase in activity surrounding the Olympic event. 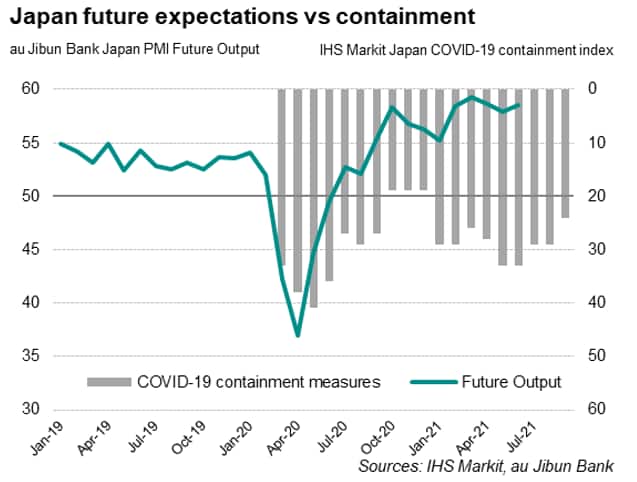