Eurozone business activity fell at an accelerated rate in January as companies continued to struggle amid the ongoing pandemic and related restrictions. The rate of factory output growth weakened to the slowest since the recovery began and the service sector saw output fall at the second-fastest rate since May.

A better than expected end to the year

The headline flash IHS Markit Eurozone Composite PMI® fell from 49.1 in December to 47.5 in January, indicating a third successive monthly decline in business activity and the steepest deterioration since November. However, the last three months have seen the PMI remain higher than during the initial months of the pandemic in the spring of last year, suggesting that the economic impact of the second wave of virus infections has so far been considerably less severe than in the first wave. 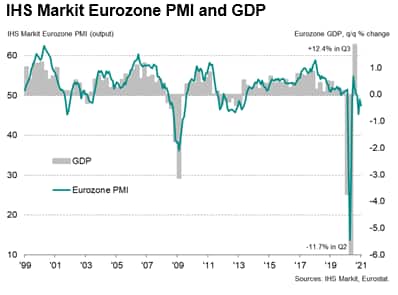 The worsening performance in January was broad based across the eurozone, albeit with marked variations. Business activity growth in Germany waned to the slowest since the recovery began in July, but the sustained expansion contrasted with output falling at quicker rates in France and the rest of the eurozone as a whole. 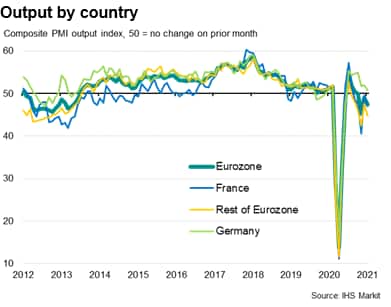 The rest of the eurozone collectively meanwhile saw an even steeper rate of contraction than France, with output falling for a sixth straight month as the index dropped from 46.1 to 44.7. However, like France, the decline remained less severe than in November

The greatest signs of resilience amid the ongoing pandemic continued to be evident in manufacturing. 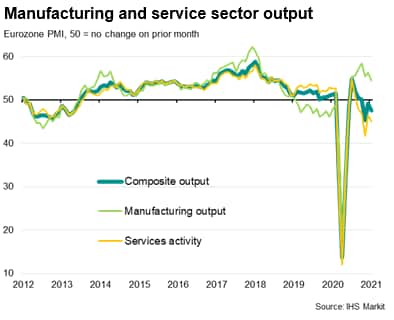 Eurozone factory output expanded for a seventh consecutive month in January thanks to sustained growth of new orders, exports and backlogs of work. Although the overall pace of factory output growth slowed to the lowest in seven months, it remained among the highest seen over the past three years. Strong manufacturing output growth in Germany contrasted with a renewed fall in production in France and a comparatively subdued rise in the rest of the eurozone.

Some of the manufacturing slowdown was attributed by survey respondents to weaker demand growth from both corporate and consumer clients, in turn linked in many cases to the ongoing pandemic, but the January survey also saw an increased incidence of supply constraints limiting production. With the exception of last April, when global factory closures hit supply lines, the lengthening of supplier delivery times in January was the greatest since survey data were first available in 1997. 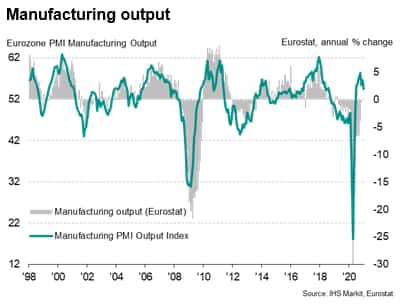 Tighter coronavirus disease 2019 (COVID-19) restrictions were meanwhile commonly blamed for a further deterioration in service sector business activity, which fell for a fifth successive month in January. Increased rates of decline of service sector output were seen across Germany, France and the rest of the eurozone as a whole, causing the overall rate of contraction to accelerate. New business inflows into the service sector fell for a sixth month running, also declining at a steeper rate than in December. However, the latest falls in service sector output and new work were less marked than those seen in November and between March and May. 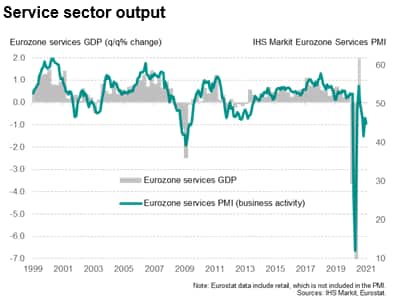 January also saw employment across the eurozone fall for an eleventh consecutive month, albeit with modest increases in employment seen in both France and Germany helping to ease the overall rate of decline to the lowest recorded since the pandemic began. Modest job losses were again reported in both manufacturing and services. 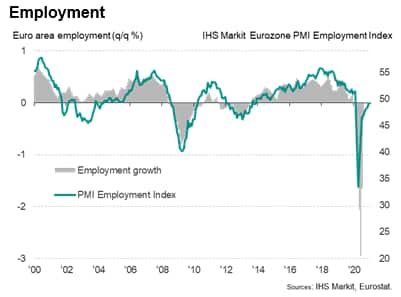 Business expectations about output in the coming 12 months pulled back from December's recent peak, largely linked to worries about the persistence of the pandemic's impact on demand, though remained the second-highest since May 2018. While sentiment about future prospects cooled slightly in the service sector, optimism among manufacturers improved to a three-year high. 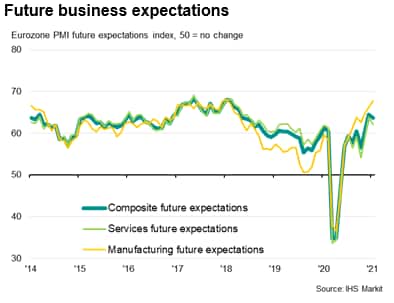 Average rates charged for goods and services meanwhile fell for an eleventh successive month, dropping at the sharpest rate since September. Although manufacturing prices rose, albeit only modestly and at a reduced rate, prices levied for services fell at the steepest rate since June, reflecting slumping demand. 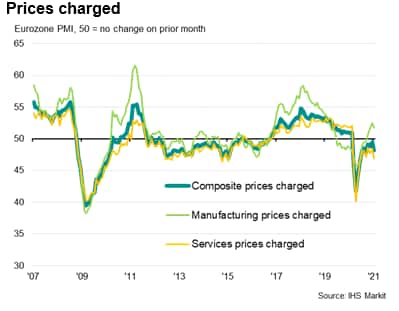 Although average selling prices fell, average input costs continued to rise, increasing at the steepest rate since January 2019. Although a modest upturn in costs was seen in services, it was manufacturing where the greatest inflationary pressures were recorded, with average input prices rising at a rate not seen since February 2018. Higher prices were commonly linked to demand exceeding supply availability for many inputs. However, any feed through of higher industrial prices has yet to be seen in CPI inflation. 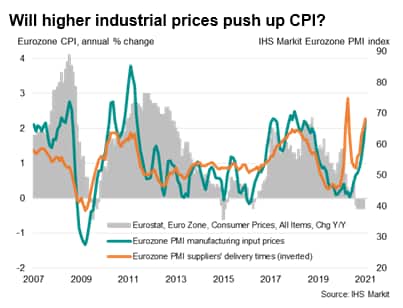