Domestically, there is also a risk of contract instability in the aluminium sector. There is a possibility for environmental disputes in the Cockpit Country boundaries, which are backed by the main opposition People's National Party (PNP). Furthermore, the USD360-million aluminium refinery in St Elizabeth, owned by Chinese company JISCO, faces labor-strike risks and subsequent operational disruptions over dismissals in July 2019, as well as contract reviews over its financial stability.

The IMF SBA officially ends in September 2019, however, the government plans to continue working with IMF teams until 2021. The government of President Andrew Holness is committed to continuing the Economic Reform Program. Next steps include increasing central bank independence, establishing an inflation target, developing a natural disaster financing framework, and creating an independent fiscal council to oversee the goal of reducing the debt-to-GDP ratio from 94% to 60% by 2026 (as mandated by the Fiscal Responsibility Law, adopted in 2010 and revised in 2014).

Fiscal stability will depend on the government's ability to maintain a sustainable public-sector wage bill, which makes up the second greatest allocation component in the fiscal year (FY) 2019/20 budget. In 2018, the government signed a wage agreement (applicable for 2017-2021), for a gradual 16% increase over the four-year period with unions, who represent 95% of all public-sector employees. IHS Markit expects annual inflation to be unchanged in 2019 at 3.7%, but gradually to increase to 4.4% in 2021 due to a supportive monetary policy that will boost domestic demand. Higher inflation will increase the risk of unions demanding higher wage increases, in turn threatening the feasibility of the government's fiscal targets by increasing public spending.

Furthermore, should the government dismiss public-sector workers to downsize the sector, the risk of labor strikes would increase. A mitigating risk factor for the sustainability of government finances would be the continued privatization of energy and tourism projects, freeing up government funds by engaging the private sector in funding key projects. Recent successful privatizations include Norman Manley International Airport, the Kingston Container Terminal, and the Wigton Wind Farm.

We expect several additional public-private partnerships to take place in the short term through the Development Bank of Jamaica.

Tax changes likely to be narrow and project-specific ahead of 2021 elections. To consolidate its popularity ahead of the general elections in 2021, the ruling Jamaica Labor Party (JLP) government is likely to introduce only very limited and project-specific taxes so as to seek to generally promote new business in Jamaica. For example, the government said in July that it would be likely to impose fees on Airbnb (and not on Airbnb property operators), for which it has signed a memorandum of understanding that includes co-operation to promote and protect the tourism sector. 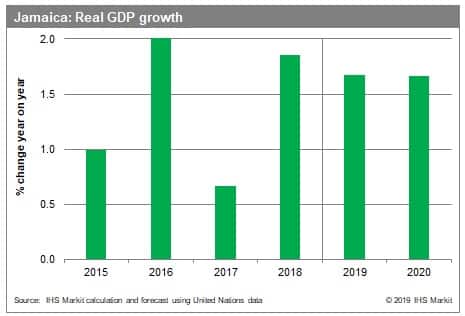