The iTraxx Asia ex-Japan Series 32 index was launched after significant changes to the index rules. While underlying constituent CDS liquidity continues to be the primary selection criteria, the motivation for the rule change is to align the iTraxx Asia ex-Japan index closer with the corresponding bond market. This enhances the use of the index as an effective instrument to gain access or manage exposure to the Asian investment grade credit markets.

The alignment of the CDS index with the bond market is based on the Market and Sector profile of the corresponding bond benchmark. The benchmark used for the bond market is the iBoxx USD Asia ex-Japan Investment Grade Index. Broadly speaking, the index rule change will result in about 20 constituent changes over time until the bond market Market-Sector profile is achieved. The replacement entities will be chosen from the Liquidity List, which consists of entities that are actively traded in the Asia ex-Japan CDS market. When there are not enough new entities available in the Liquidity List from the required Market and Sector, new entities are selected from the Debt Issuer List. The Debt Issuer List consists of the largest bond issuers in the USD Asia ex-Japan Market, and only consists of entities that have at least USD one billion debt outstanding. 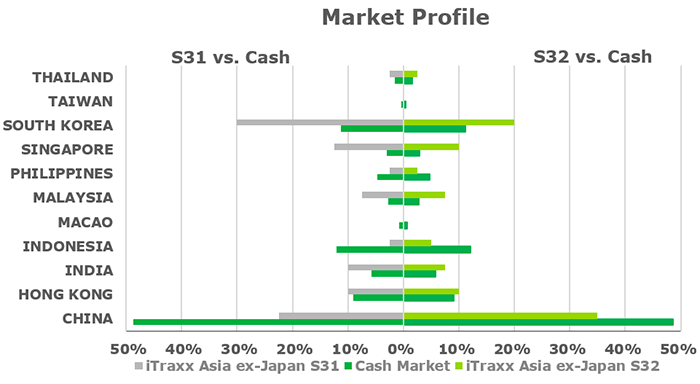 Notional traded:
Following the announcement of the iTraxx Asia ex-Japan Series 32 Final List in mid-September, IHS Markit CDS Pricing Service received pricing contributions on all the new names that were included in the index based on cash market issuance. The new names included are some of the largest debt issuers in the Asia ex-Japan USD bond market, and we believe they are a valuable addition to the Asia ex-Japan CDS market. With robust composite prices/spreads for all underlying index constituents, the iTraxx Asia ex-Japan Series 32 index is a highly liquid instrument to hedge / gain exposure to Asian USD credit markets.

Learn more about our iTraxx Indices