Italy's public procurement agency, CONSIP, has this month updated the list of pharmaceutical products under a 2017-21 tender with a valuation of EUR10 billion (USD12 billion) under the SDAPA dynamic purchasing system (DPS). DPS tenders for the supply of pharmaceutical products (medicines, vaccines, infusion solutions, and blood products) were first launched in October 2011. The third-round, 36-month (March 2017-March 2021) SDAPA scheme for pharmaceuticals has a total estimated value of EUR10 billion (USD12 billion). The expected award criterion is that of the lowest price submitted. The list of active ingredients to be procured under the tendering arrangement is available here.

The co-ruling Five Star Movemen, including Minister for Health Giulia Grillo, t has at the same time voiced criticism of the economic case for pharmaceutical tenders in Italy. This is based on a fall in the number of offers submitted for tendering contracts during recent years, as well as the cancellation, postponement, and failure to fulfil some contract lots in 2018. The governing party is moving to monitor the tendering competition process more closely. This could include reviewing the number and value of individual purchasing contracts by CONSIP on behalf of the Ministry of Economy and Finance, as well as setting up monitoring procedures through the Italian Competition Authority (AGCM). Implementing greater cost-control controls in the tendering system for off-patent and mature medicines is a politically less sensitive target for the M5S than reining back public spending on innovative and rare disease medicines.

In mid-2018, CONSIP awarded separate tender contracts for filgrastim, infliximab, follitropin alfa, etanercept, insulin glargine, rituximab, and epoetin (available here). The public procurement agency claimed that on average, the tender generated savings of about 18% or equivalent to EUR140 million. The actual discounts ranged from a maximum of 48% to a minimum of 14%. Seven lots were up for tender for an estimated total auction amount of EUR460 million. However, only six lots were awarded (for a value of EUR405 million), because there was no submission for the seventh lot.

A separate tender for the supply of antineoplastic and immunomodulatory drugs resulted in only 11 of 26 lots being fulfilled (available here). The tenders estimated that total auction amount was EUR112.50 million, but the total award amount reached only EUR80.85 million. Many of the lots in this case went to one operator, Accord Healthcare (UK), which was awarded total contracts valued at EUR62.85 million (or equivalent to 77.7% of the total award notice in the tender offer).

An increase in the trend towards unfilled tender lots, combined with a fall in the average number of offers submitted by pharmaceutical companies during recent years, is driving government-led efforts to tighten regulation surrounding tenders and strengthen CONSIP's bargaining power in awarding contracts. This began in July when Grillo referred the matter to the Italian Competition Authority (AGCM) and pledged to activate an improved monitoring system of tendering procedures.

CONSIP publishes the contract notice, defining the product characteristics and providing negotiation models and tender documentation. Procurement contracts are split into lots, each of which consists of combinations of four dimensions: active ingredient, ATC classification, dosage form, and dose. In 2017, 162 unique notices were issued for an expenditure total of EUR1.05 billion. 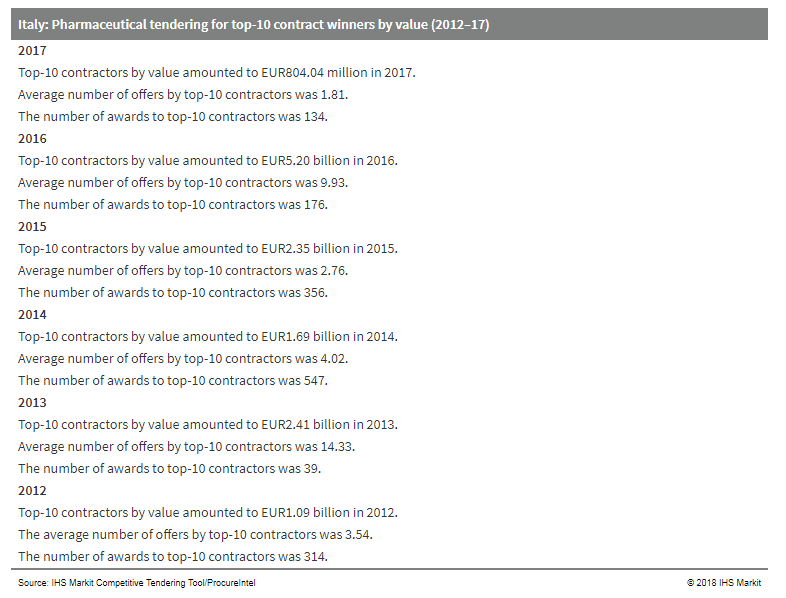 The degree of competition in the market is usually linked to the value of procurement contracts. In Italy, when the value size of contract has increased, smaller pharmaceutical firms can often find it more difficult to participate in highly competitive processes. This results in a lower number of competitors. If the tendering participation effect is not strong enough, this may lead to lower cost savings. A July 2018 research paper published in the Applied Health Economics and Health Policy estimated that the higher rates of competition in off-patent pharmaceutical tenders in Italy resulted in higher amounts of price reductions. This was calculated at about "10% per additional competitor".

The updated list of pharmaceutical products under the 2017-21 SDAPA tender for pharmaceutical products has an estimated total value of EUR10 billion (excluding value-added tax), with the award criterion set as the lowest price submitted. IHS Markit's new competitive tendering tool ProcureIntel is monitoring the COSNIP restricted procedure at the award level. Italy's regional tendering system is operated as a purchaser-driven, cost-control mechanism aimed at lowering unit prices. The process is popular among regional authorities, but the potential downside is that tendering results in thinner margins for pharmaceutical companies, thereby making Italy unattractive to market entrants. The positive for a tendering-heavy market such as Italy is that it can provide expedited market entry or access.

The outcome of CONSIP tenders will probably be subject to stricter oversight and competition market scrutiny in 2019 and beyond. There is a low risk that this could entail opening investigations to ascertain whether companies restrict competition by co-ordinating their participation in a tender. However, in February 2017, the Italian Council of State confirmed that the AGCM had the power to fine companies that distort the market through collusion. More probably, the government will attempt to expand the level of co-operation between regional purchasing centres and CONSIP, with the aim of boosting the number of offers received, diversifying the award winners, and generally more closely monitoring award outcomes. The main policy objective will probably be to ensure that lower ranked, smaller pharmaceutical competitors fare better in winning individual contracts, with the expectation that increasing the number of average offers per tender will overturn the current softness in price competition.