In the stress scenario, we anticipate the fiscal shortfall will overshoot the government's target and stand at 3.0% of GDP in 2019 for the following reasons.

The timeline of the unfolding sovereign debt crisis in the stress scenario continues to evolve in 2019 and consists of: 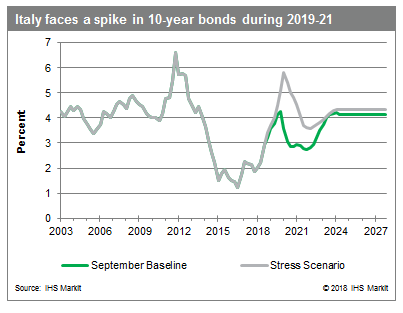 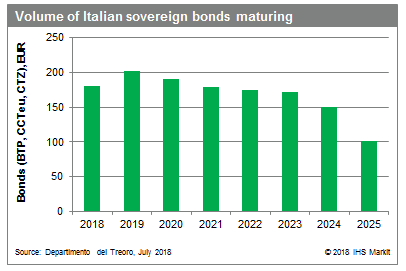 The stress scenario assumes higher sovereign debt funding costs, which will receive additional traction from the strong likelihood that the main rating agencies will downgrade Italy's long-term credit worthiness. More elevated sovereign borrowing costs in the stress scenario are ill-timed with Italy facing a heavy schedule of sovereign debt redemptions in 2019-20. The stress scenario implies that maturing bonds and treasury bills will be rolled over at notably higher interest rates when compared with the yields attached on the maturing debt.

The stress scenario assumes the country's treasury will have to offer yields in excess of 5% to place 10-year bonds in late-2019 and most of 2020. Higher sovereign borrowing costs imply a step-up in general government interest expenditure, hitting a historical high in excess 6% of GDP from late-2020.

The key threat is that domestic financial institutions are increasingly reluctant to step up their demand for BTP bonds in the face of a sell-off at the height of crisis in the stress scenario. The risk is that their large exposure to Italian sovereign debt alongside falling bond prices damages their core capital ratios. In addition, with European Central Bank's (ECB's) net purchases of sovereign bonds set to terminate at end-2018 alongside foreign investors limiting their exposure to Italian bonds, domestic investors will have to step up.

But the stress scenario assumes domestic investors will be the marginal buyer for Italian sovereign debt holds. Critically, the scenario assumes solid bid-to-cover ratios (a measure of investor demand) in auctions of Italian bonds and treasury bills during the height of the crisis. We assume the following supports:

The encouraging news from our US team in their forecast update covered on @LogisticsMgmt https://t.co/QJTDiepAVy #economics

With the sovereign risk rating downgrade of 88 countries in 2020, the risk of non-payment for contract or trade-rel… https://t.co/0nHIpPxISN