The latest PMI data signalled quicker growth of the Italian private sector economy during July, as the loosening of COVID-19 restrictions provided a sustained boost to client demand across manufacturing, services and construction, with the latter also continuing to benefit from government eco- and super-bonus tax relief schemes.

Italy's private sector economy saw quicker output growth during July, according to the latest PMI data. The All-Sector Output Index - a weighted average of the comparable manufacturing, services and construction PMI indices - rose to 58.4 and signalled the second-strongest rate of expansion in all-sector output in 15 years, behind only January 2018.

The private sector economy has now recorded an upturn in each month since February, with the average all-sector Output Index reading over the second quarter of the year, at 55.2, also the highest since the opening three months of 2018.

The latest official GDP (preliminary) estimates for Q2 2021 point to a 2.7% increase on the quarter and an annual rate of GDP growth of 17.3%. 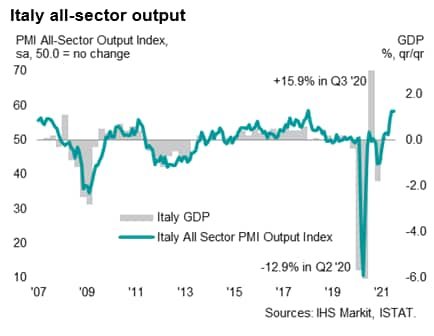 Goods producers continued to record the sharpest pace of expansion across the three monitored sectors during July, a trend that has existed since the initial rebound in all-sector output during February. The sector also saw much earlier signs of recovery, with factory production rising consecutively in each month since June 2020, while for construction and services, the current period of sustained growth began in February and May 2021, respectively.

Manufacturing output growth did slow further in July from May's more than 10-year peak, as did the rate of increase in order book volumes, but the expansions were nonetheless among the fastest seen since data were first collected in January 1998 and reflective of another strong performance. 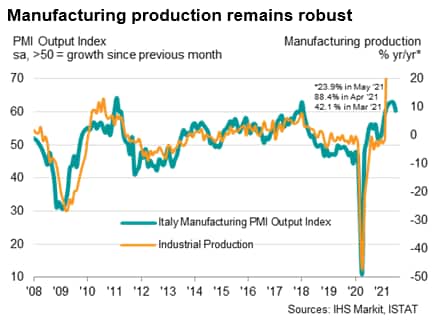 With demand remaining strong, the slowdown primarily reflected ongoing supply-side issues, which constrained growth not just in Italy but across the wider eurozone manufacturing sector.

The Suppliers' Delivery Times Index - a widely used indicator of supply delays, capacity constraints and price pressures - signalled a further lengthening of lead times for manufacturing inputs in July, with delays the third most severe on record (behind June 2021 and April 2020). Shortages were the primary driver of delivery delays, according to survey respondents, alongside logistics issues and surging demand for materials, all of which inhibited Italian manufacturing output as companies were left waiting for inputs before completing orders.

As such, capacity pressures also contributed to the waning momentum of the goods producing sector in July, due to both these supply constraints and material shortages, but also amid reports that firms were struggling to keep up with demand. The level of work in hand (but not yet completed) at Italian manufacturers rose for the seventh month running, with the rate of backlog accumulation easing only slightly from June's record pace.

The quicker rate of all-sector output growth during July was also driven in part by a stronger services performance, with the sector benefitting from the easing of COVID-19 containment measures and reopening of customer-facing industries. Business activity continued to rebound, with the latest upturn the strongest for 14 years. The resumption of international travel also led to stronger client demand, according to panellists, with a record increase in export orders providing a further boost to the sector in the opening month of the third quarter.

Service providers subsequently took on additional staff for the fourth month in a row, and at the fastest pace since late-2019, suggesting that firms are increasingly confident the recovery will continue following the severe COVID-19 induced downturn throughout the majority of 2020 and early-2021. 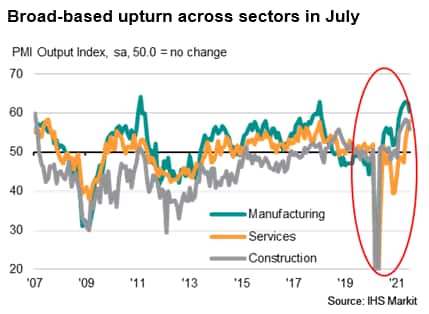 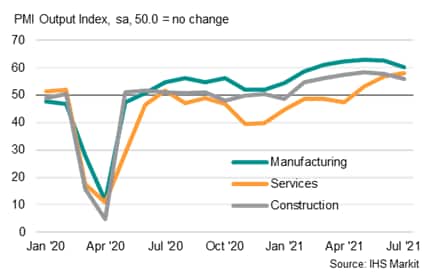 The final element in the broad-based all-sector recovery at the start of the third quarter was a sustained increase in construction activity. At 55.8, the Italy Construction Total Activity Index® pointed to a sixth straight monthly rise in activity. The rate of expansion remained sharp, despite easing further from May's 14-year high.

Much like the manufacturing sector, supply-side constraints weighed on construction output in July. Lead times for inputs lengthened to a near record degree amid reports of severe material shortages, with constructors noting that delayed inputs had put the brakes on some projects.

Client demand remained buoyant, however, in part due to the eco- and super-bonus schemes introduced by the Italian government. The incentives, launched first in 2020, provide tax relief of 110% for expenses used to improve the energy efficiency of properties, and have been widely attributed by survey respondents to strong demand in the construction sector since their inception. 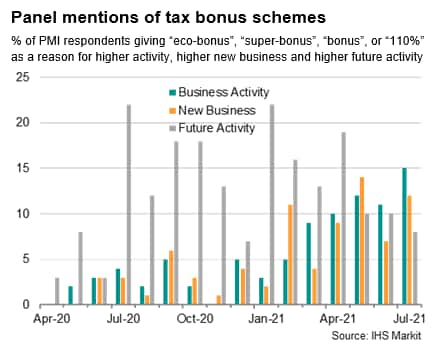 Residential construction has subsequently recorded the highest Business Activity Index readings across the three monitored sectors in all but one month since July 2020, highlighting the well-needed boost these schemes have provided to Italian constructors. 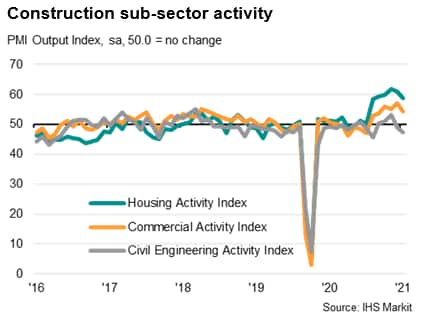 Inflationary woes continue to stack up in July

Supply-side constraints and material shortages have also led to unprecedented inflationary pressures in recent months. The Italy All-sector Input Prices Index hit a near 21-year high in July and pointed to a severe rate of cost inflation, with rising input prices recorded across each of the three monitored sectors.

Manufacturing saw the steepest increase in costs, followed by construction, although both experienced a slight easing of inflationary pressures from record highs recorded in June. Services firms too have felt the impact of cost inflation, with supply-side constraints, as well as rising wage bills, noted as drivers of the fastest increase in operating expenses since September 2008 during July. 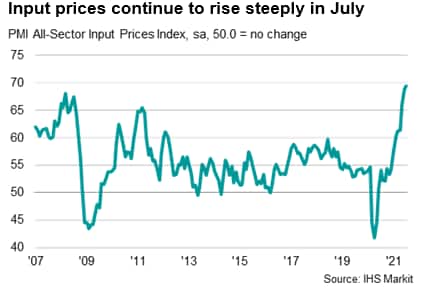 As a result, both goods producers and service providers again upped their output charges in July. The rise in the prices charged for goods was markedly quicker, however, reflecting stronger cost pressures, with factory gate charges rising at the fastest pace on record and rapidly overall, with goods producers noting they were attempting to retain profitability amid surging input costs.

A common theme across each of the three sectors is optimism towards activity over the next 12 months. The all-sector Future Activity Index has been at or around series record highs in each month since February. Excusing this period, the latest reading in July was indicative of the strongest level of sentiment on record, as companies remain confident of a sustained economic recovery following the easing of lockdown measures.

Downside risks stem from the rising rate of COVID-19 Delta variant infections across the globe, which dampened the global economy in July and hit supply chains, although the Italian government will be hopeful that so-called "COVID pass" restrictions should limit infections and allow for a sustained economic recovery free from stricter containment measures. Inflationary pressures and worsening supply chain disruptions also pose downside risks, particularly for manufacturing, with these pressures showing little signs of relenting.

After a fall of 8.9% in 2020, latest IHS Markit estimates suggest an annual rate of GDP growth of 5.9% in 2021, revised up from an earlier estimate of 4.7% amid the easing of COVID-19 restrictions, with PMI data from July confirming further solid growth.

The PMIs for August will subsequently be assessed for further signs of a sustained rebound across the private sector economy.