The Italian private sector remained close to stagnation during February, with activity increasing only mildly according to the latest PMI data. With the coronavirus likely to further dampen business in coming weeks, the weak survey data indicate a heightened risk of the economy sliding into recession.

The headline Composite Output Index posted 50.7 in February, up slightly from 50.4 in January, to signal a second consecutive monthly increase in private sector output. The rise was only mild, however, indicating that Italian private sector activity remained close to stagnating.

At the sector level, manufacturing remained a key drag and recorded a nineteenth consecutive reduction in output, though service providers reported the quickest uptick for four months. Meanwhile, overall demand conditions improved, with new business growth the joint-fastest since September 2018, albeit only modest. Foreign demand conditions were less favourable, however, as new export orders declined for the tenth month running amid reports of dampened client demand due to the global coronavirus outbreak. That said, around 90% of survey responses were collected before the spread of the COVID-19 virus in northern Italy - meaning its full impact is yet to be reflected in PMI figures.

The Italian economy contracted at the end of last year, with official GDP data for the fourth quarter recording a quarterly reduction of 0.3%, confirming the IHS Markit PMI signal towards the end of 2019. PMI data for January and February point to a further, although softer, contraction in the first quarter of this year. 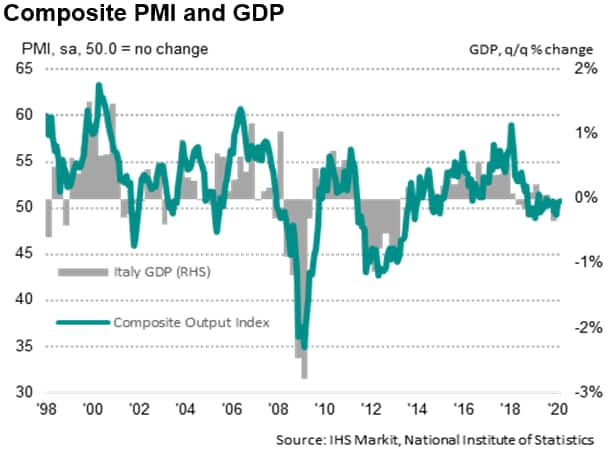 The latest IHS Markit European Nowcast predicts Italian GDP to contract at a rate of 0.14% (q/q) in Q1, which would push the Italian economy into a technical recession. But, with the impact of the virus outbreak yet to be fully reflected in the PMI data, a deterioration in the March figures would indicate an even deeper rate of contraction.

February data highlighted further divergences between the sectors, with the Italy Services Business Activity Index - which is based on a single question asking respondents to report on the actual change in business activity at their companies compared to one month ago - rising to 52.1, up from 51.1 in January, to signal the quickest increase in service sector output since last October. Meanwhile, new business growth accelerated to a four-month high and staff numbers increased once again.

In contrast, Italian manufacturers recorded the seventeenth consecutive monthly deterioration in operating conditions. At 48.7 in February, down from 48.9, the headline Italy Manufacturing PMI was dragged lower by further reductions in production and order book volumes.

At the sub-sector level, the manufacturing downturn was broad-based, driven by the investment goods category. Notably, February was the second occasion in the past three months that saw each of the three monitored sub-sectors recording a deterioration in manufacturing conditions. 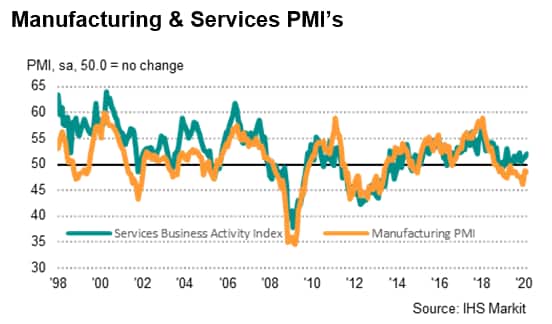 Despite the latest uptick, the Italian private sector has underperformed relative to the rest of the eurozone, with the composite PMI output index among the lowest of the four largest euro countries throughout most of the past two years. The latest figure, albeit indicative of a mild expansion, was the joint-lowest across the eurozone, alongside Germany. 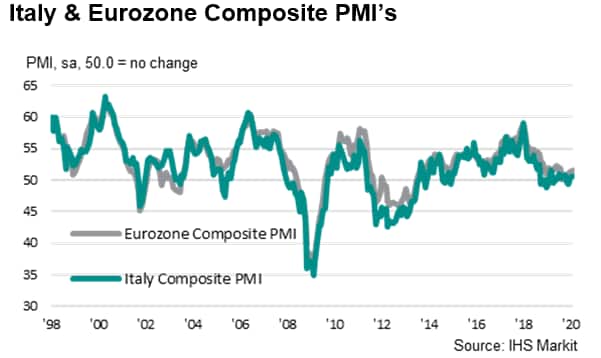 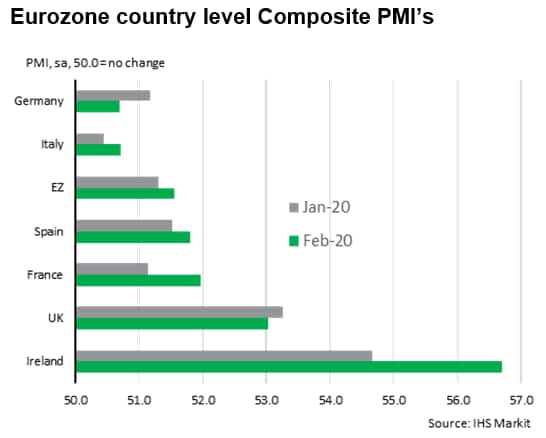 While the improvement in the PMI suggests that, up to now, Italian private sector firms have avoided any large adverse impacts from the coronavirus outbreak, signs have started to appear of business being affected. February saw the virus being linked by manufacturers to supply chain issues resulting in longer lead times, and in services the virus was commonly associated with a further reduction in new export orders, notably in the travel and tourism sector.

Note that around 90% of survey responses were collected prior to the escalation of the outbreak, with February data collection for the PMI running from 12th- 25th February. As such, the latest PMI data are only reflective of the initial impact of the spread of the COVID-19 virus in Italy.

With the number of confirmed cases in Italy now topping 2,500 at the time of writing, and quarantine measures widening, the virus is widely expected to have a negative impact on the Italian economy in the coming months. 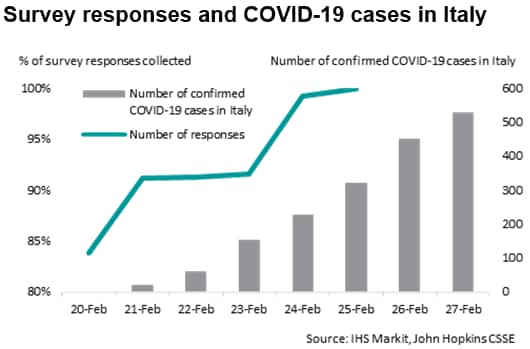 The most likely near-term risks stemming from the impact of the virus are twofold. Survey respondents have already reported weaker export demand and supply chain pressures as a result of the outbreak. This is likely to worsen and be compounded by weaker domestic demand, as confidence drops and feeds through to consumers' appetite for spending. Indeed, business sentiment regarding activity over the coming 12 months moderated during February, with panellists noting that the potential impact of the virus had dragged on confidence.

All eyes will be on March PMI data to see a fuller insight into economic trends and the impact of the outbreak.