Foreign fighters returning from the Islamic State's self-declared caliphate will raise the risk of complex and large-scale terror attacks in Europe, according to a new report released today from Jane's Terrorism and Insurgency Centre (JTIC).

"In response to its territorial collapse in Iraq and Syria, the Islamic State is likely to widen its tactical arsenal, employ new technologies and strengthen its roots in local Islamist networks, building resilience despite the losses in its heartlands," said Otso Iho, senior analyst, JTIC.

"In addition to centrally-planned and executed operations, there also remains a substantial threat from lone actors conducting attacks in the name of the Islamic State, which are usually then claimed by the group," Iho said.

In Western Europe in 2018 to date, JTIC has recorded 44 attacks by pro-Islamic State individuals or small cells, causing at least 334 fatalities and 1,248 wounded.

"These skills include the construction of viable IEDs - learned in Iraq and Syria where the Islamic State has produced IEDs on an industrial scale - the effective and professional handling of assault weapons; training for acting in high-pressure combat situations; the use of new weapon types or technologies, such as unmanned aerial vehicles (UAVs); and maintaining better operational security," Iho said.

As a result of this injection of skills and knowledge transfer to existing networks, the use of explosives - which the Europol TE-SAT 2017 terrorism report highlighted was already used in 40 percent of conducted, foiled, and planned attacks in 2016 - is likely to increase further, particularly in terms of successful attacks.

"There is also the potential for escalating attacks to include methods used routinely in Iraq and Syria, such as vehicle-borne improvised explosive devices (VBIEDs) and suicide VBIEDs," Iho said. "The use of a VBIEDs or SVBIEDs in Europe by militant Islamists would significantly increase the potential fatality of attacks, and give militants more control over the level of destruction by studying the most efficient placement of the explosives."

There are indicators that some cells have already attempted to adopt this method. For example, the cell that conducted the 17 August 2017 vehicle-impact and knife attacks in Barcelona and Cambrils, Spain, had been using a safe house in Alcanar to prepare a substantial amount of explosives, before an accidental detonation destroyed the building and likely sped up the execution of the subsequent attacks. According to Catalan police after the incident, the materials discovered at the bomb-making site included the explosive triacetone triperoxide (TATP), used in the high-profile attacks in Paris and Brussels, as well as more than 120 butane gas tanks and an explosive suicide belt.

Notably, Al-Qaeda in the Arabian Peninsula (AQAP) has published guides on the construction of alternative VBIEDs in the West, which are structured around a standard IED and a vehicle packed with gas tanks - not dissimilar to those sought by the Barcelona attackers. In addition, Islamic State has published video instructions for creating TATP.

Drones pose growing threat from above

Militants may also employ new technologies, such as unmanned aerial vehicles (UAVs) or 'drones', in attacks to reach new targets or increase the publicity and impact of an attack.

"The Islamic State and other Islamist militant groups have used UAVs rigged with explosives in Iraq and Syria, and their use in conflict zones is becoming more sophisticated and varied - increasing the likelihood of their adoption in Europe," Iho said.

For instance, on 5 January, unidentified militants used 13 GPS-guided fixed-wing UAVs rigged with IEDs to target Russia's Humaymim Air Base and its naval base in Latakia, Syria, reportedly operating the devices from as far away as 100km. Although Russian air defences brought down the UAVs and the attack was unsuccessful, the incident illustrated the risk posed by such technology to less hardened targets in Europe.

"Airports, power stations, public transport, symbolic targets, sports stadiums, amusement parks, or other places with large gatherings of people in Europe are likely to lack the types of defences that could prevent a swarm of UAVs rigged with dozens of explosive devices from causing significant damage," Iho said.

"These devices are available commercially and can provide an effective weapon at reasonable cost, particularly for militants with prior experience of adapting them in Syria," Iho said. 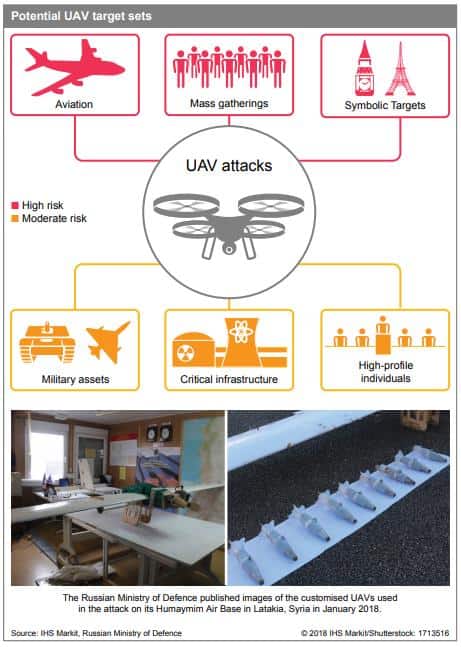 Get in touch to learn more about JTIC and other solutions from Jane's.