There has been a major reduction in the use of chemical weapons (CW) by the Islamic State in Syria in 2017, and a concentration of CW attacks in Iraq inside the besieged city of Mosul, according to new analysis from Conflict Monitor by IHS Markit (Nasdaq: INFO), a world leader in critical information, analytics and solutions. 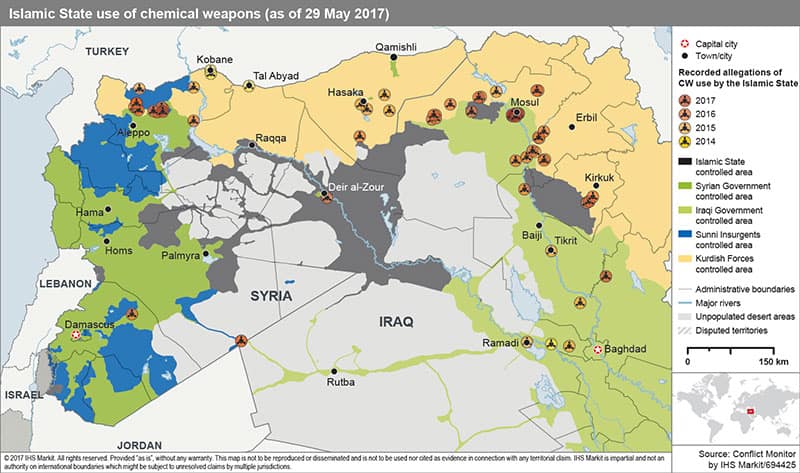 Since the first incident in July 2014, at least 71 allegations of the Islamic State using CW - 41 in Iraq and 30 in Syria - have been recorded by Conflict Monitor. Most of these involved either the use of chlorine or sulphur mustard agents, delivered with mortars, rockets and IEDs. The Islamic State uses chemical weapons mainly for their psychological impact, as their lethality does not exceed the use of conventional weapons.

The only alleged use of CW by the Islamic State in Syria this year was on 8 January 2017 at Talla al-Maqri in Aleppo province. For comparison, there were 13 allegations in the previous six months, concentrated in the same area of Aleppo province. All other recorded allegations of the Islamic State using CW in 2017 have been in Iraq; nine inside the besieged city of Mosul, and another single allegation near al-Atheem in Diyala province.

"The operation to isolate and recapture the Iraqi city of Mosul coincides with a massive reduction in Islamic State chemical weapons use in Syria", said Columb Strack, senior Middle East analyst at IHS Markit. "This suggests that the group has not established any further CW production sites outside Mosul, although it is likely that some specialists were evacuated to Syria and retain the expertise."

Mosul was at the centre of the Islamic State's chemical weapons production. IHS Markit assesses that the siege of Mosul, and targeted killings of CW experts in US Coalition airstrikes, have significantly degraded the Islamic State's already low CW production capability. The continuing CW attacks in Mosul most likely draw on remaining stockpiles in the city.

Conflict Monitor by IHS Markit is an open-source intelligence collection and analysis service. It generates unique data-driven insights on the conflict in Iraq and Syria, combining unrivalled information collection with advanced analytical tools, and analysis by Jane's security experts.

Visit our site to learn more about the service and request a demonstration or get in touch.

#Arconic to split into two companies by 1 April https://t.co/omhLuhkbq2 @arconic