Three years after Islamic State leader Abu Bakr al-Baghdadi declared the 'Caliphate', the group has lost more than 60 percent of its territory and 80 percent of its revenue, according to new analysis released today.

The Islamic State's caliphate spanned an estimated 36,200 km2 on 26 June 2017, roughly the size of Belgium or the US state of Maryland, according to the latest analysis from Conflict Monitor at IHS Markit. This marks a 40 percent reduction in territory since the start of 2017, and a 60 percent reduction overall since our first estimate in January 2015, when the jihadist group controlled 90,800 km2 in Iraq and Syria.

"The Islamic State's rise and fall has been characterized by rapid inflation, followed by steady decline,", said Columb Strack, senior Middle East analyst at IHS Markit. "Three years after the 'Caliphate' was declared, it is evident that the group's governance project has failed." 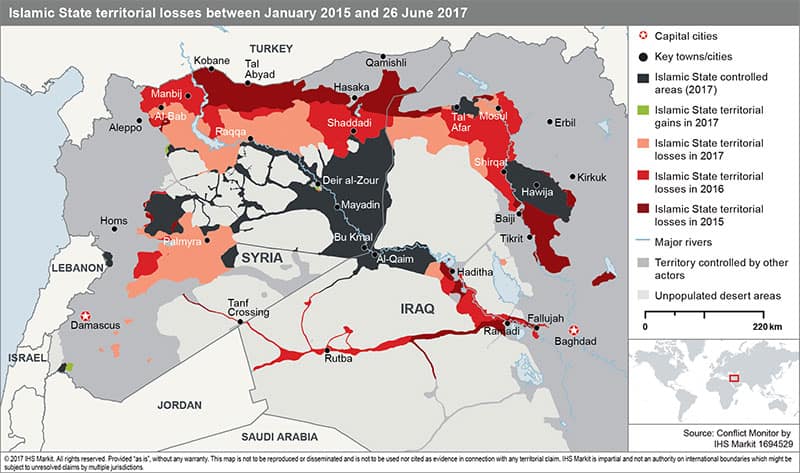 Pressure on the Islamic State is intense. US-backed Syrian Democratic Forces (SDF) have advanced into the outskirts of Raqqa, while Syrian government forces are pushing east towards Deir al-Zour, the IHS Markit analysis says. In Iraq, government forces and Iran-backed militias are preparing to eliminate the last remaining pockets of Islamic State control in Hawija, Tal Afar and al-Qaim once the Mosul operation is complete.

"The Islamic State's remaining caliphate is likely to break up before the end of the year, reducing its governance project to a string of isolated urban areas that will eventually be retaken over the course of 2018," Strack said.

"Territorial losses are the main factor contributing to the Islamic State's loss of revenue," said Ludovico Carlino, senior Middle East analyst at IHS Markit. "Losing control of the heavily populated Iraqi city of Mosul, and oil rich areas in the Syrian provinces of Raqqa and Homs, has had a particularly significant impact on the group's ability to generate revenue." 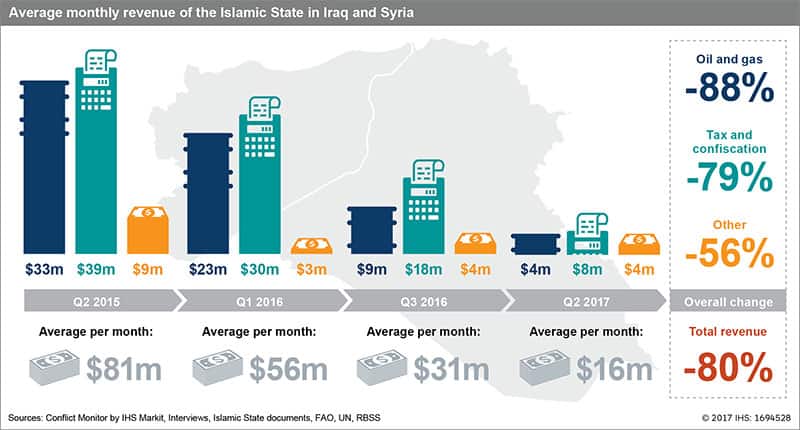 The Islamic State's ability to increase the fiscal burden on the population it governs, to compensate for financial losses, appears to have reached its limits. The Conflict Monitor team has not identified any significant changes to taxes and fines imposed by the Islamic State since late 2016.

"Although the Islamic State still appears to be involved in some commercial activity, especially oil production, there are indications that it is attempting to increase its financial 'reserves', accelerating the shift from a highly bureaucratic and centralized quasi-state economy towards funding a future insurgency through a real war-economy," Carlino said. "An attempt to force people living in the Caliphate to pay all transactions with the Golden Dinar - the group's currency announced last year - is the most evident indicator of this trend".

The impact of the drop in revenue on the Islamic State's ability to fund itself has been offset somewhat by the drastically reduced number of people the group governs. While its revenue decreases, so do its expenses.

Attacks abroad likely to increase before they decrease

Military defeat and the loss of territory in Syria and Iraq will be insufficient to sway the views of Islamic State supporters. The group's video productions have declined in frequency, suggesting that it is less capable of disseminating its messages. However, it has already prepared its followers for the loss of territory.

Territorial losses are driving the Islamic State to intensify its campaign of terrorist attacks abroad to compensate.

"Egyptian, Saudi Arabian and UAE efforts at weakening radicals' influence, and pressuring clerics to develop a new interpretation of Islam that is reconciled with modernity, are likely to drive some Islamist conservatives into embracing violence," said Firas Modad, senior Middle East analyst at IHS Markit.

"Efforts by Western governments to confront Islamists are likely to have the same effect. Terrorism risks from Islamist groups are therefore likely to increase before they decrease," Modad said.

Conflict Monitor by IHS Markit is an open-source intelligence collection and analysis service. It generates unique data-driven insights on the conflict in Iraq and Syria, combining unrivalled information collection with advanced analytical tools, and analysis by Jane's security experts.

Visit our site to learn more about the service and request a demonstration or get in touch.