Is there room for more offshore rigs to leave the fleet?

This has been a strange, challenging and unusual year in many ways. After the global offshore rig market was sent reeling in March, with the double hit of an oil price crash and a global pandemic to work around, the industry was forced to reassess everything in a very short space of time. Part of that reassessment resulted in another swathe of older units being retired from the fleet and contractors wasting no time in having them sent for scrapping once they reached the end of their useful lives.

According to data in RigPoint, as of 20 October 2020, 312 rigs have left the global fleet since the beginning of 2010 - the vast majority (80%) since 2015 around the time the effects of the previous downturn began to kick in. Attrition in the past decade peaked in 2018 when 63 units left in one year (40 jackups, 16 semis and seven drillships). This was when the vast majority of the older fleet was either retired or scrapped most notably in the North Sea standard jackup market. 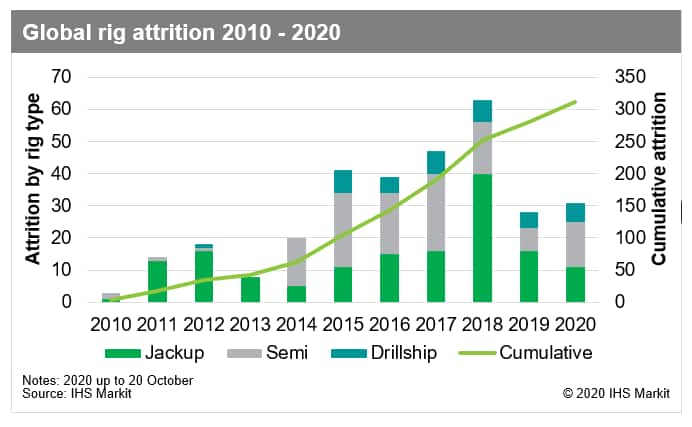 To date in 2020, a total 31 units have left the global fleet. This is made up of 11 jackups (35%), 14 semis (45%) and 6 drillships (20%). As is clear from the chart below, the North Sea has carried the bulk of attrition this year so far. The Middle East has seen a significant number of jackups leave the fleet while the US Gulf of Mexico has seen both semis and jackups removed.

Of the remaining fleet there are a total 806 jackups, semis or drillships. Of that total, 147 rigs are cold stacked (99 jackups, 27 semis and 21 drillships). Most of the cold stacked jackup, fleet, which consists of 68 units over 20 years old (69%), is in the Middle East, with 23 units, followed by the US Gulf of Mexico with 20 units and Mexico with 11 units. Northwest Europe trails behind in comparison with just four cold stacked units in total (4% of the global amount) with not much scope to remove further rigs. In the three highest standing regions for cold stacked units there is certainly room for some rigs to be removed, in the Middle East 14 out of those 23 units (61%) last worked before 2018, in Mexico, none of the 11 cold stacked units have worked since 2017 and in the US Gulf of Mexico seven units (35%) have not worked in over a decade.

Of the 27 cold stacked semis globally only nine (33%) are over 20 years old - five of them in Northwest Europe. In fact, Northwest Europe holds more of the world's cold stacked semis - eight in total - than any other. The US Gulf of Mexico and Southeast Asia are close behind with seven and six units respectively. Five of the eight North Sea semis (63%) last worked within the sector in the past 18 months. Only three of the already incumbent North Sea specific units last worked prior to late 2016. There is little wiggle room to remove any more of these semi units.

There are 21 cold stacked drillships globally with only three (14%) over 20 years old. The vast majority of cold stacked drillships, 14 (or 67%), are located in West Africa or the Mediterranean where there is already an abundance of warm and hot stacked units, marketed internationally, with little work to occupy them in the near term.

It should be noted, however, that removing those cold stacked units from the fleet is unlikely to solve the problem of an over-saturated fleet. Some marketed units will also have to be removed through scrapping, conversion or cold stacking. According to the World Rig Forecast report, up to the end of 2021, the average number of marketed surplus drillships remains relatively low with 20 units currently forecasted. This is higher in the semi fleet with an average of 28 expected over the same time frame. It's in the jackup market, however, where it truly becomes clear how much scope there is for further units to leave the market with an average of 123 marketed surplus units between now and early 2022. 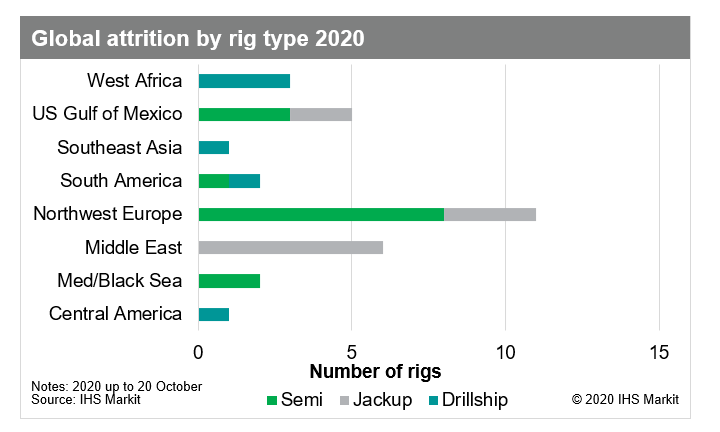 This has undoubtedly been a tough year with a dearth of requirements emerging over the summer months in most regions. But, as it stands, the future has begun to look a little brighter with some marginal recovery in the oil price and operators once again issuing requirements for new work in both the short and long term. Along with those aspects of recovery, in some regions the fleet has been significantly reduced since the start of the year. That said, globally, there remains scope to see older units retired, scrapped or converted to non-drilling units particularly in the jackup sector in regions such as the US Gulf of Mexico and Mexico.

More details on attrition, demand, surplus and other aspects of the global offshore rig market can be found in RigPoint and our monthly World Rig Forecast report.

Sarah McLean is a Senior Rig Analyst at IHS Markit.