Is the future of brent dated as a global crude benchmark?

For more than 30 years, Dated Brent has been the world's most important crude benchmark, it is estimated that Dated Brent is currently used to price about two-thirds of the world's oil trade. However, this status is under threat from declining production in the crudes that currently underpin the benchmark. Having a trusted, liquid benchmark crude, free from manipulation and price squeezes, is vital for global crude trade. But a solution to the Dated Brent problem is not easy or obvious, and the supremacy of Dated Brent as the world's preeminent global crude benchmark may be increasingly challenged by WTI as US crude production and exports increase.

When crude oil is sold, both the sellers and the buyers prefer to use a market reference or benchmark quote, with a premium or discount, rather than agreeing on an absolute price. This reduces the risk of price movement between the time of agreeing on the deal, loading the cargo, and delivering to the refinery. Dated Brent is currently almost unique in its characteristics which minimise the risk of price manipulation.

Brent Blend production peaked in 1985 at 1.3 MMb/d. By 2000, production had declined below 0.5 MMb/d, and this threatened Brent's ability to act as a global benchmark because of fewer traded cargoes. Fewer cargoes reduced overall liquidity and increased the ability of an individual buyer to influence the market price. Therefore, between 2002 and 2015 a series of changes were made to Dated Brent in an effort to maintain its liquidity and status, by increasing the available volume (see Figure 1). 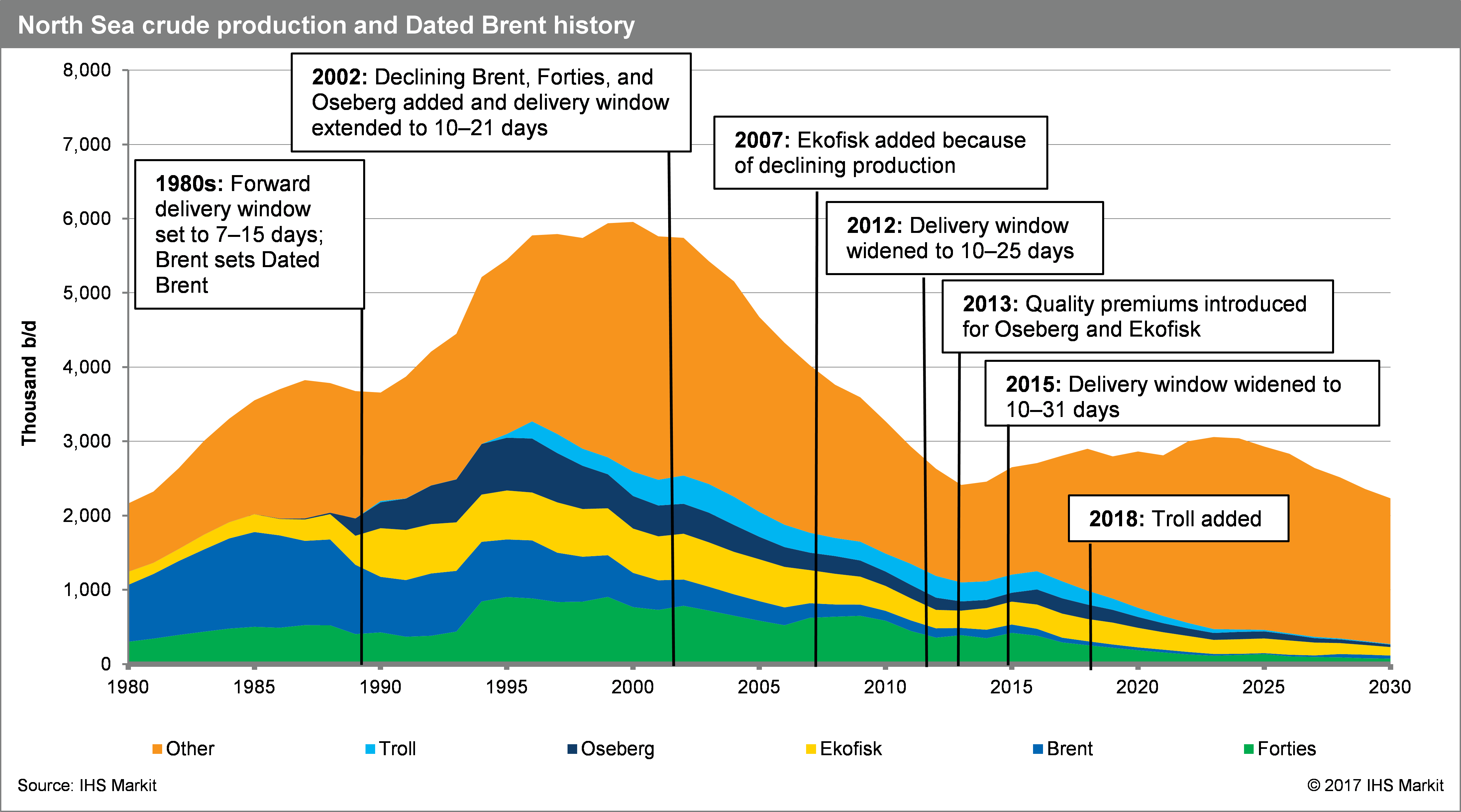 Troll crude will also be added to the Dated Brent basket, but even with this, total potential delivery volume will be below the current level within two years. This is really only a short term bandage on the problem.

Suggestions have been made to add non-North Sea crudes to Dated Brent. All of these crudes have drawbacks, and most have several, be they quality and therefore pricing differences, timing and freight differences, a different sales basis, or a lack of diversity of suppliers. It is therefore unlikely that any of these will be added to the Dated Brent basket.

As US crude production rises towards 10 MMb/d, and with the US crude export ban now lifted, US crude exports are rising and US regional benchmark crudes such as WTI may challenge the supremacy of Dated Brent as the world's dominant crude benchmark.

This blog is a summary of a detailed report published on the IHS Markit Crude Oil Markets service, to learn more please contact Spencer Welch at spencer.welch@ihsmarkit.com.

Spencer Welch is Director, Oil Markets and Downstream in IHS Markit based in London.
Posted 28 June 2017