Is India the Marginal Demand Market for Global Butane?

The abundance of both propane and butane supply has pushed down their price ratios against crude oil and naphtha across the United States, Europe, and Asia, incentivizing LPG cracking, i.e., displacing alternative feedstocks (e.g., ethane, naphtha), to make ethylene. Another development from the excess LPG supply is the narrowing butane-to-propane price premium. Increased supply incentivizes demand-side competition between propane and butane, based on the relative economics, for example in the domestic and steam cracking end-use markets.

Indian LPG demand has significantly grown in recent years as the government pushes for cleaner fuel, especially for the women in below-poverty-line (BPL) households, under the Pradhan Mantri Ujjwala Yojana (PMUY) program. The country's LPG imports grew from about 4 million metric tons in 2010 to an estimated 14 million metric tons this year, becoming the second-largest consumer of LPG in the world after China. With about 7 million metric tons of butane imported in 2019, India is the largest butane importer globally.

The PMUY program has just recently reached the targeted 80 million households, resulting in overall LPG penetration of 95%, compared with 55% five years ago. It will be interesting to see how the demand trajectory will look in the coming years. On one hand, the increase in LPG demand due to the PMUY scheme poses a challenge for refill owing to affordability issues as it targeted BPL households. According to the recent refill data published by the Indian government, the national average for PMUY beneficiaries is about 2.4, which is about half of the average rural refill rate of 4.7. On the other hand, the organic growth on the back of the country's relatively strong economic growth outlook and ongoing LPG infrastructure development should continue to drive the country's LPG demand and imports.

The residential sector accounts for about 90% of India's total LPG consumption where it is used as a cooking fuel. India's domestic market has traditionally favored butane for its higher heat content and easier to handle than propane cylinders due to butane's lower vapor pressure. However, the propane and butane composition can shift within a certain range based on the relative prices between propane and butane. 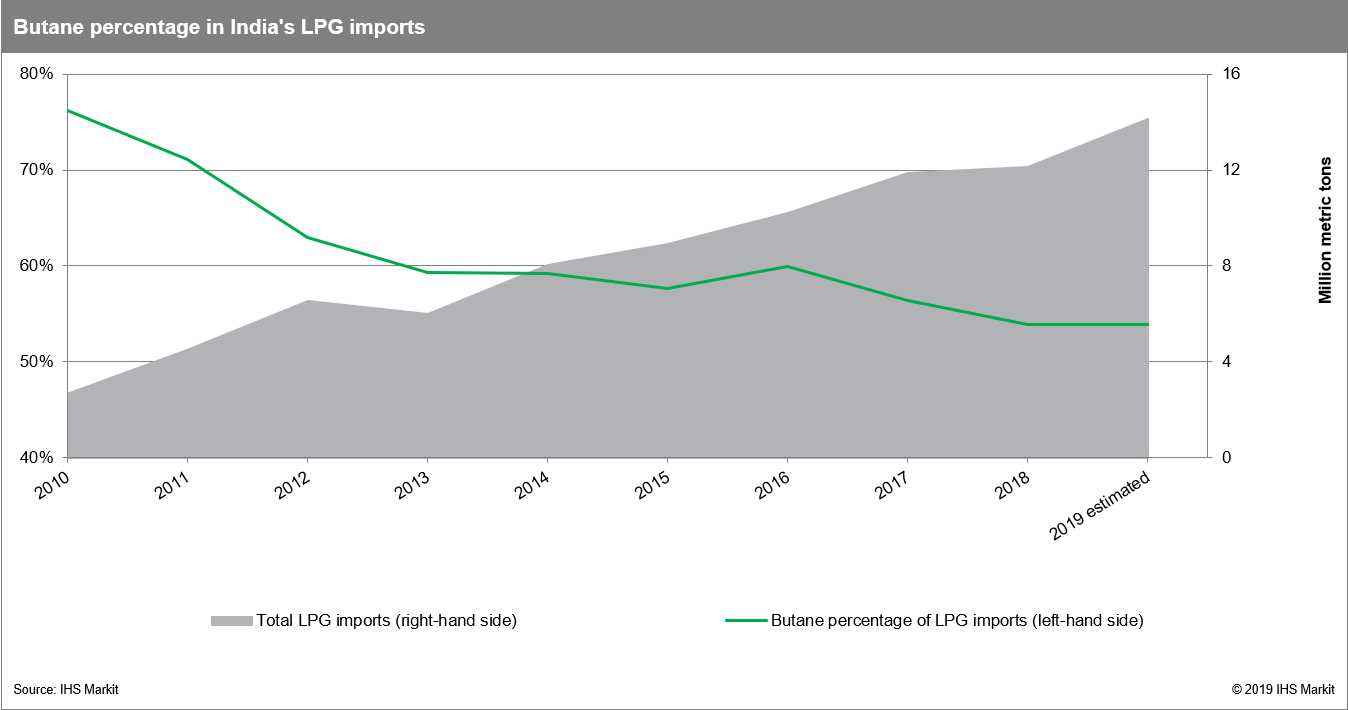 The figure above shows India's total LPG imports since 2010, along with the butane share of the imported LPG. As the country's domestic demand grows, and with the increasing availability and relatively cheaper propane, butane's share has decreased from about 75% in 2010 to the current 55%, which in turn helped narrow the butane-to-propane price premium. The propane share in India's LPG cylinders cannot be too high (no higher than about 50%, according to industry estimates) owing to the industry configuration and safety concerns. However, in a scenario where butane prices further weaken or even move below propane, butane demand could return to the domestic sector.

India's LPG imports account for about 13% of global LPG waterborne trade and 20% of global butane waterborne trade. In other words, India plays an important role in the global butane market, as China does in the global propane market. As India continues to grow demand and strive to lower its overall imported LPG costs, IHS Markit expects the country to have both the size and flexibility to help balance global butane consumption, thus stabilizing the propane versus butane price relationship.