Is the eurozone heading for a recession?

Back down with a bump

Driven initially by a slowdown in exports, eurozone growth weakened markedly through 2018, culminating in a 1.2% y/y increase in GDP in Q4, the weakest pace of expansion in almost five years. IHS Markit's composite PMI suggests the underlying weakness will continue. 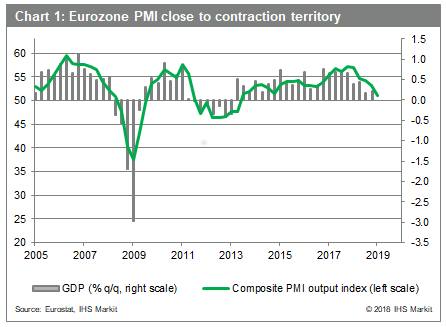 The same applies to global trade, with the IHS Markit global PMI for new export orders in contraction territory in each of the past five months.

On a three-month moving average basis, the y/y rate of change in eurozone industrial production fell into negative territory in November for the first time since October 2013 and weakness has been increasingly broad-based weakness across sectors. 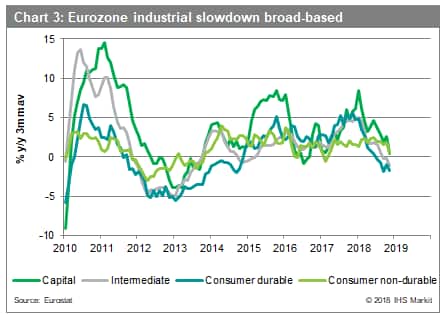 A complication is the exceptional factors which exaggerated some of the weakness during H2 2018, including automobile production delays due to new emissions testing procedures. We have factored a rebound into our q/q GDP growth profile for Germany (0.6% q/q) and the eurozone (0.4% q/q) in Q1 2019 to reflect this and other distortions. A positive effect from fiscal stimulus measures in Germany, France and Italy has also been factored in. But even with a decent start to this year, we forecast a significant slowdown in annual eurozone GDP growth in 2019 and 2020 to 1.2% and 1.0%, respectively, based on our preliminary estimates for February's forecast round.

The more persistent the weakness in eurozone exports, the greater the risk of cross-contamination into domestic demand and negative spillovers have become increasingly evident. The most important is the slowdown in employment growth. Again, leading indicators suggest the deterioration has some way further to go. 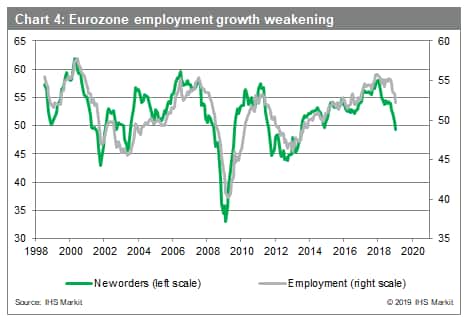 In fairness, domestic activity data have not been uniformly negative. Retail sales rose in volume terms in Q4, helped by lower oil prices.

Weakness in exports and manufacturing activity does not automatically imply that a recession will follow, of course. The late 1990s and early 2000s provide a couple of examples of when domestic demand was resilient enough to offset the external weakness. 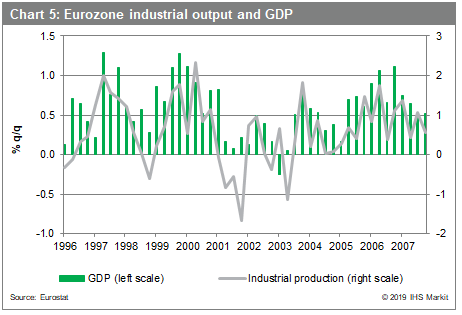 But those were exceptional times, when domestic demand was booming as European central banks slashed interest rates for the start of EMU. The eurozone is much less resilient today.

Below we list various factors typically associated with severe rather than "technical" recessions (the latter commonly defined as consecutive q/q contractions in GDP).

With most of these factors not prevalent in the eurozone currently, the risk of a severe recession seems low. That said, we do have concerns regarding many of the issues and how they may pan out going forward. Oil prices, for example, rose sharply in autumn 2018 due to supply concerns related to US sanctions against Iran, while the US administration's protectionist agenda is also a worry. Monetary policy tightening is not a threat but there is limited room for stimulus in the event of an adverse shock.

Near-term, the principal downside risk from a domestic perspective is a steeper deceleration in investment growth. The slowdown to date has been marginal, particularly for machinery and equipment expenditure which was still expanding at a near 6% y/y rate as of Q3 2018 (the latest data available). With the ratio of machinery and equipment investment to GDP now at record highs and uncertainty elevated, we could be at a tipping point. 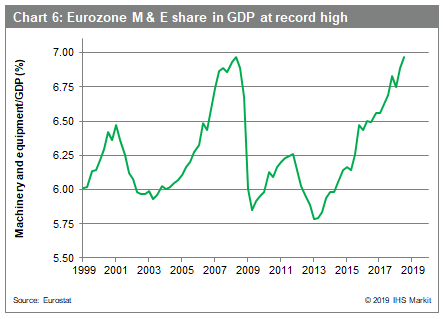 The key medium-term risk to the eurozone from an external perspective is probably a hard landing for the global economy, given the unusually long US economic expansion currently and policy challenges, on the fiscal side particularly. China's rebalancing is an additional concern. That said, our base case remains for a gradual slowdown in both economies.

Could some of the uncertainties dissipate, boosting growth? Should a "no deal" Brexit in March be taken off the table, for example, then we would expect a short-term fillip. But it may not make a lasting difference. An extension of Article 50 would not preclude a "no deal" outcome further down the line, while the issue of future UK-EU trade relations would still need to be resolved. Moreover, Brexit is not the only concern. The risks surrounding Italy and their potential spillovers, plus the concerns about China's future growth trajectory, reflect deep-rooted structural issues.

For the past year or so, we have been forecasting downward surprises on eurozone growth relative to market consensus expectations. The latter have belatedly shifted downwards but not far enough in our view (to 1.5% and 1.4% in 2019 and 2020, respectively, as of January). Expect further downward surprises.