Mainland China recently released the decennial Seventh Population Census conducted in 2020. The demographic trend revealed in the Seventh Census that attracted the most attention is the acceleration of the aging population. What does this deteriorating demographics trend portend for China's economic destiny? 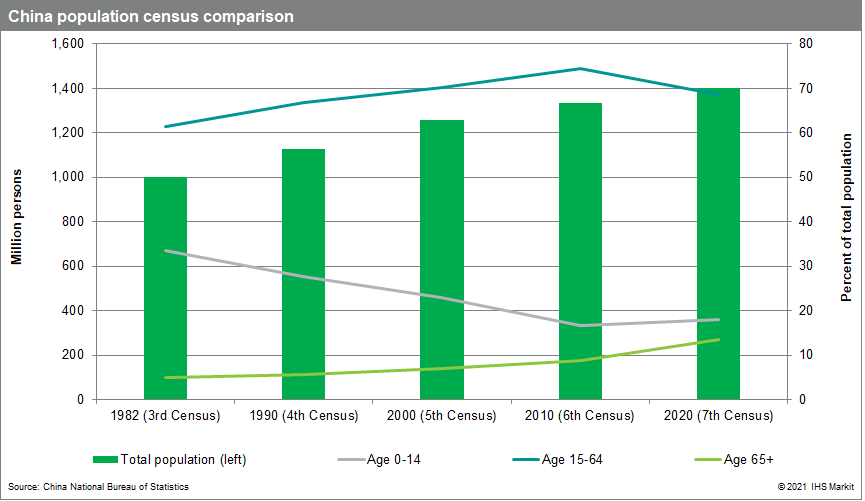 Demographics deterioration is projected to continue into the long-term 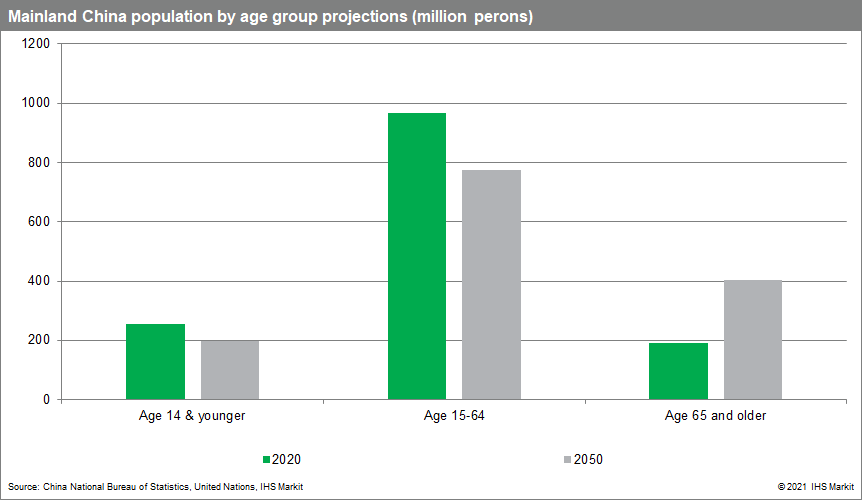 Besides the drag on long-term economic growth, China's aging population will increase the financial burden on its pension system. China's social pension fund's contributor-to-recipients ratio has been declining since 2011, due to a rising retired population. According to an estimate by the China Academy of Social Science, if policies remained unchanged, the national social pension fund for urban employees could only afford 10 months of payments by 2028 and may run out by 2035. 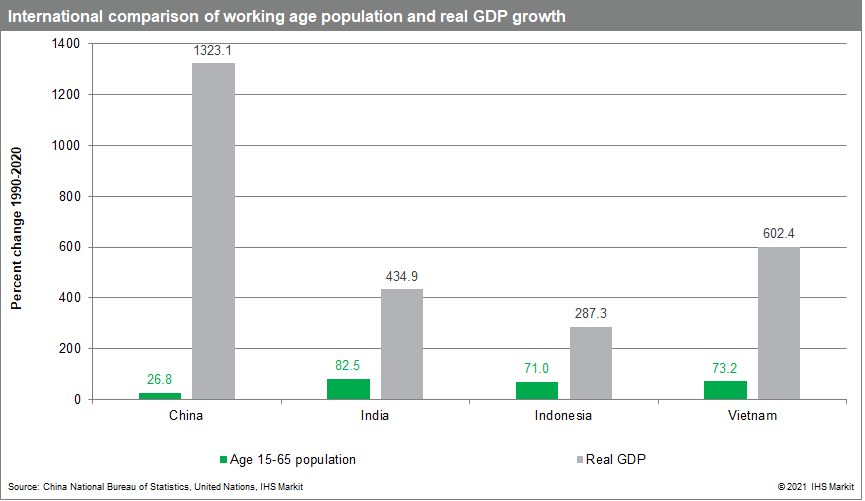 The Chinese government has tried to reverse the trend of demographic deterioration since late 2015 when it abandoned the One-Child Policy and allowed couples to have two children. The Two-Child Policy only boosted the birth rate temporarily, from 11.99 newborns per 1,000 persons in 2015 to 13.57 per 1,000 in 2016, before gradually falling to 8.52 per 1,000 in 2020. In May this year, after the release of the Seventh Census, the government further relaxed the family planning policy with the introduction of the Three-Child Policy and promised to strengthen supportive policies regarding issues like maternity leave, housing, and female employment protection, with details yet to be clarified.

Before the policies to reverse demographic deterioration can take effect, the government can also limit the aging population's negative economic impact with other policies. Improving labor quality through enhancing the population's education level is one such policy. To this end, China has continued to make significant progress. On a per 1,000 persons basis, from 2010 to 2020, the number of the Chinese public with college-level or above education rose from 89 to 155 persons, a 74% increase.

The Chinese government is also considering gradually extending the retirement age to counter the aging population's economic cost. The life expectancy of the Chinese population rose from 68 in 1981 to 77 in 2018, a little lower than the OECD average of 81. China's retirement age is 60 for men and 50 for women, unchanged since 1978, which is lower than OECD countries' average of 64.2 for men and 63.5 for women. Extending the retirement age from 60 to 70 could lift China's contributor-to-recipient ratio of the urban employee social pension fund from 3.3 workers supporting one retiree to 6.9 workers supporting one retiree. 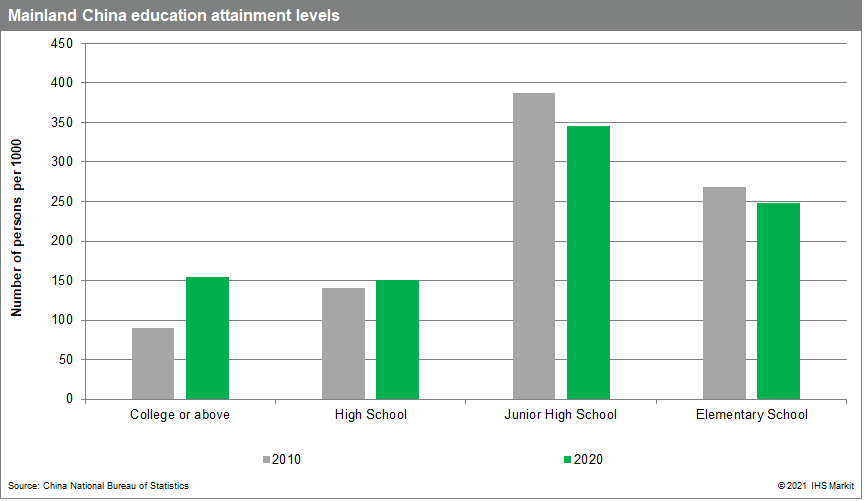 Demographic trends have not played an essential role in China's economic development. From 1990 to 2020, China's working-age population grew 26.8%, while its real GDP surged 1,323%. In India, Indonesia, and Vietnam, on the other hand, while the working-age populations grew much faster over the same period, by 82.5%, 71.0%, and 73.2%, respectively, their economies expanded by much lower magnitudes - 435%, 287%, and 602%, respectively. Thus, factors beyond demographics played a far more important role in China's economic success.

One way to assess demographics' relative importance in economic development is through growth accounting. That is, decomposing an economy's growth into the supply side contributing factors of capital stock, labor force, and total factor productivity (TFP, the portion of economic growth not attributed to capital and labor inputs, but efficiency gains). From 1981 to 2019, China's real GDP growth averaged 9.5% annually, of which, 4.8 percentage points came from capital stock expansion and 3.8 percentage points was attributed to TFP growth, and only 0.8 percentage point was due to an increase in the labor force.

Looking forward, using the same growth accounting framework and the UN's projection for the working-age population decline, the falling labor force will drag on China's long-term economic growth from 2026 to 2050 by 0.4 percentage point annually. With the UN's low variant projection of a sharper decline in the working-age population, the labor force will pull down real GDP by 0.7 percentage point annually in 2016-2050. If China can maintain a moderately high long-term annual growth in the 4% range by implementing substantive economic reforms, then a 0.4- 0.7-percentage-point annual drag from a shrinking labor force is manageable. However, if China's productivity slowdown of the 2010s continues and economic growth further grinds down to the 2% range, then the shrinking labor force's 0.4-0.7-percentage-point drag on growth becomes daunting. 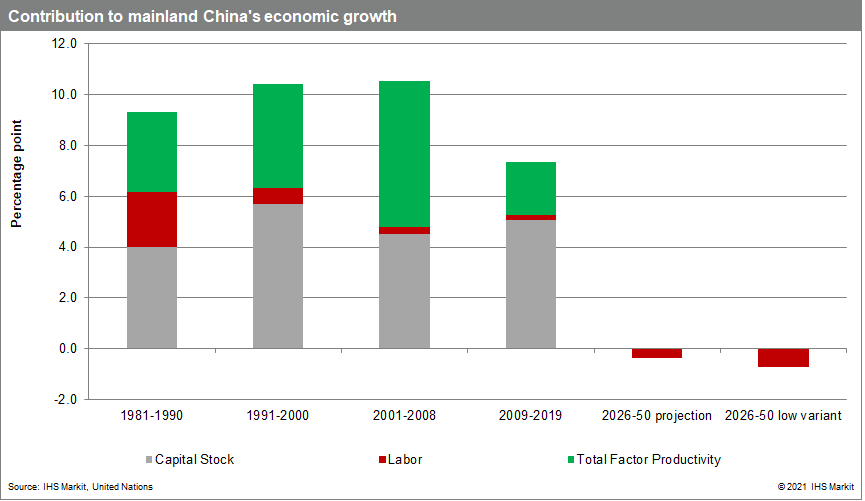