Is chemical recycling a game changer?

Chemical or feedstock recycling is being touted as a game changer that can transform recycling. With chemical recycling, innovative technologies - such as pyrolysis, gasification, chemical depolymerization, catalytic cracking and reforming, and hydrogenation - convert plastic waste into chemicals. These technologies produce feedstocks such as monomers, oligomers, and higher hydrocarbons that can in turn be used to make virgin polymers.

Cost and complexity are major negative factors: a chemical recycling plant has a much higher CAPEX than a comparable mechanical recycling operation. Chemical recycling also has an adverse carbon lifecycle assessment (LCA) footprint. A carbon pricing regime would raise the cash cost of virgin resin production to a higher level than today. Even so, a typical chemical recycle project would struggle to meet the internal rate of return for most businesses.

However, looking purely at economic viability from cost perspective misses the bigger picture. Business leaders should focus on balancing economic viability, environmental impact, and regulatory compliance. Yet producers need to overcome many hurdles before establishing chemical recycling programs, and having authorities adopt a balanced approach to computing the value of chemical recycling would help.

Ironically, the escalating cost of unrecycled plastic may positively affect the case for chemical recycling. All EU countries have pledged to increase Extended Producer Responsibility (EPR) fees charged to consumer packaging companies for plastic waste. These fees are used to build recycling infrastructure. Also under consideration is the idea of imposing a steep tax of €800 per metric ton of unrecycled plastic on producers under the EU's Multiannual Financial Framework.

Another factor that could help companies embrace chemical recycling is product differentiation. Chemically recycled polymer would be as pure as virgin polymer. It also would avoid the pitfalls of mechanical recycling, such as contamination and potential risks to health and safety - thereby offering a superior product while providing circularity. Products made in this environment would be easy to differentiate.

In recent consulting work, IHS Markit has seen common themes emerge in plastics recycling, especially the circular economy. How circularity is achieved varies. Figure 1 maps the conversion of hydrocarbon feedstocks into petrochemical building blocks that can include olefins and aromatics or their derivatives. Most polymers made today are processed with additives, fillers, and fibers to meet specific end-use customer needs, ranging from barrier films to keep food fresh to rigid components in automobiles. 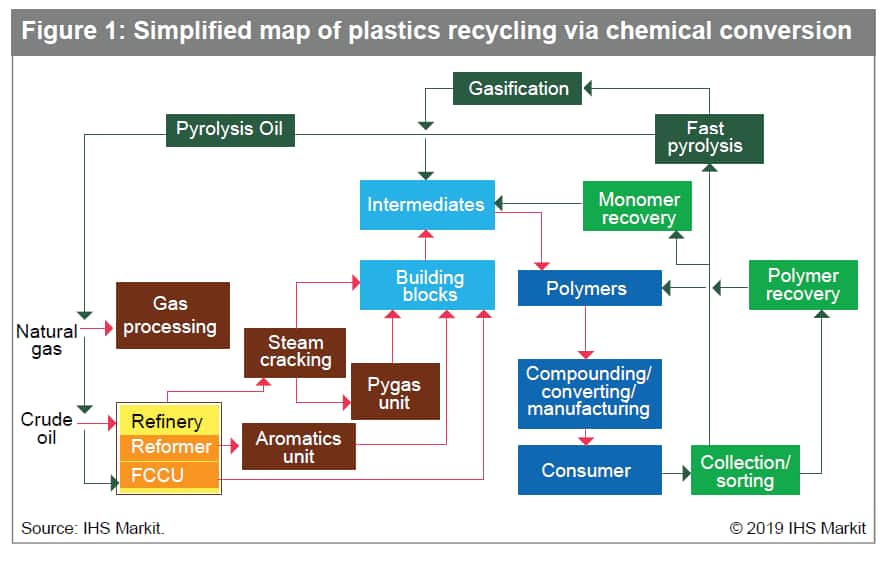 Many municipalities collect and sort plastics waste, often alongside green water, paper, cardboard, and glass. Plastics must be sorted for subsequent processing. Techniques such as near-infrared systems that can "see" different plastics help with this. If manufacturers can be convinced to rethink the design of common household items - using a single polymer such as HDPE instead of a mix of polyethylene, ethylene-vinyl acetate (EVA) copolymers, or polyacetal - recycling could be simplified.

Once sorted, polymer articles can be cleaned and baled, ready for downstream use. Polyolefins and polyesters can be mechanically recycled and re-incorporated into select packaging solutions or made into fibers for fabrics.

The simplest way to chemically recycle polyolefins is to use pyrolysis, heating the polymers in an anaerobic atmosphere and generating an off-gas for use as fuel, a solid "char" for fuel use, and a core product of mixed liquid hydrocarbons that is composed similar to naphtha. The output can be sent to a steam cracker or a fluid catalytic cracking (FCC) unit for olefins and fuel component production. SABIC and Plastics Recycling recently struck a deal to adopt this approach. Circularity is achieved by making hydrocarbons for use in the existing supply chain. Pyrolysis can be installed on a low scale close to sorting operations. Operations can also be integrated with sorting and mechanical recycling.

Some plastics waste can be gasified or co-gasified. Enerkem is part of a consortium with a project that is converting mixed waste into synthesis gas (syngas) and ultimately methanol, mainly for fuel use. In China, plastics and pyrolysis oils could be co-gasified using existing large-scale operations for methanol, olefins, and mono-ethylene glycol (MEG) production from syngas. In this case circularity can be achieved through monomer production.

PVC is challenging to recycle chemically due to its chlorine content. It generates hydrogen chloride during, for example, the pyrolysis reaction. Although these processes can handle small volumes of PVC when precautions such as guard bed systems are in place, it is far from ideal. It is important to remember that most plastics contain additives and that efforts are needed to sometimes clean up polymers beyond basic cleansing. Technologies such as supercritical carbon dioxide could be used to remove many additives from recyclable polymers, but such approaches are costly.

Another controversial area is the cost of chemical recycling and who pays. IHS Markit has an approach to validate costs and the affordability of feedstock. By modeling the appropriate process - considering utility needs, labor hours, maintenance, overhead, capital, and scale of operation - we can compute the price of feedstock to give a zero margin on the product. This approach can be applied to pyrolysis for making naphtha as well as depolymerization for making MEG. 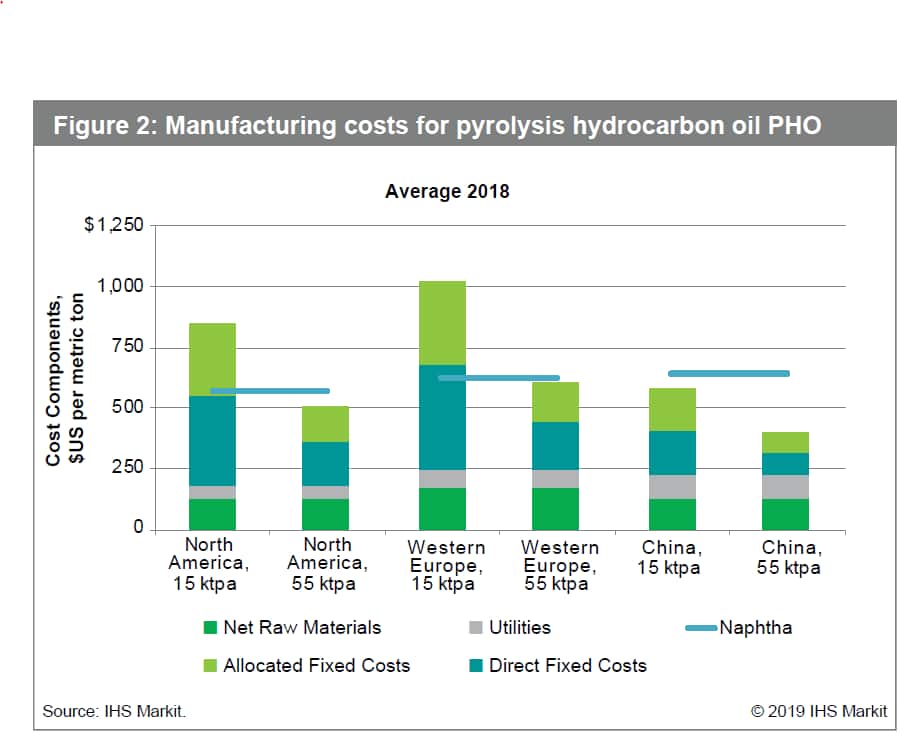 For plastics recycling to be financially attractive, there must be a workable margin for everyone in the recycling chain - including municipalities, sorters, processors, and mechanical and chemical recyclers. And the best solution may vary by geography. The mega-cities of China could favor an approach for polyester linked to the existing gasification infrastructure. In Europe, certain major cities are located near petrochemical production, which may lead them to polyethylene pyrolysis for liquids cracking.

If government-established recycling targets are to be achieved, the links between consumers, municipalities, and petrochemical production must be improved. After all, public opinion is moved by media images of a threatened planet and eco system. Only through the collaboration of people, municipalities, and industry - supported by improved technology along the recycled plastics supply chain - can we begin to find a solution for this global crisis.