In the lead up to the solar eclipse next week, it seems fitting to probe a bit further on the future of international reference pricing as a tenable cost-containment tool: with the rise of managed-entry agreements and confidential discounting, will it soon be eclipsed by other policy levers?

In our ongoing discussions on whether these dynamics spell the proverbial writing on the wall for IRP, one is reminded of periodic critiques of such a basic economic concept as Gross Domestic Product: an indicator with many self-evident shortcomings, yet one that is too embedded, too much of a glue in modern policy and industry circles, to envision its full-scale abandonment, at least any time soon. After all, if it ain't broke, don't fix it. And yet who gets to decide if something as lofty as GDP (or IRP) is broken in the first place? Surely many important voices have weighed in on the GDP debate, with no shortage of alternative or complementary measures put forward.

That IRP may be broken hinges on the degree of opacity in the prices actually being referenced. In rather the same way that GDP has been described as an increasingly misleading measure due to the sheer volume of activity and innovation it fails to capture, one might accuse IRP of referencing increasingly misleading benchmarks: if the ostensible rationale of IRP is that one country references what prices other countries are able to secure in an attempt to achieve some notion of "fair" pricing (whether that is the real aim of IRP is another matter), then clouding the waters with confidential concessions -simple discounts/rebates or outcomes-based - makes the exercise of questionable utility.

What are the alternatives?

Yet the real question is, as with a replacement for GDP, what alternatives do policymakers have? Above and beyond that, and related to who gets to decide whether something is broken in the first place, how quickly can consensus (nationally, let alone internationally) emerge over the supplanting of, and replacements for, entrenched tools and policy levers, overcoming institutional inertia?

That second one is best left for another day, but findings from the recent update of our our International Reference Pricing Guidebook suggest a number of ways that payers may respond to the challenges associated with (and arguably engendered by) IRP:

Putting IRP to work for IRP

There is also another option, and one which we believe is the most prevalent: namely, to unleash the power of IRP to address some of the challenges engendered by the collective use of the tool itself. The prime example is the number of countries we've seen increasing the frequency of IRP application, or otherwise bolstering the re-referencing exercise.

In the final analysis, it is clear there is no one-size-fits-all response to the challenges inherent to the IRP game. Undeniably, there are situations where some countries are placing less emphasis on IRP - or combining it with other tools - out of frustration with growing opacity. Yet we continue to believe this should not be misinterpreted as marking the hide tide of IRP.

Indeed, if one looks at the global breakdown of frequency of re-referencing under IRP (see Figure 1), it is clear that the overwhelming majority of countries apply the tool at regular intervals post-launch. This breakdown reflects recent moves by a number of countries to more frequent re-referencing cycles. We suspect that in the near future, this distribution will change, with more countries joining the pool of countries re-referencing at least once a year. 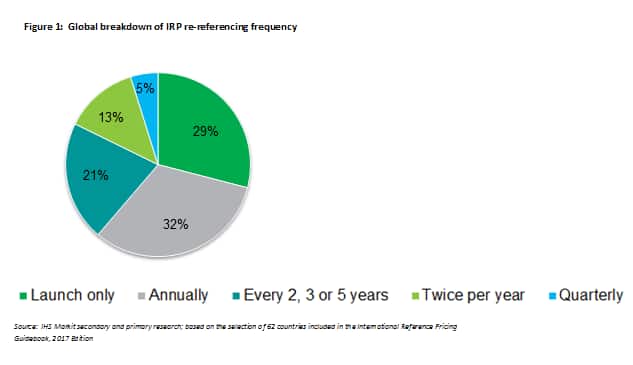 It should not be forgotten that ultimately there are other cost-containment levers in the toolbox aside from IRP - it is not as though opportunities for IRP-driven price revisions will fail to present themselves over time just because of growing opacity in net prices at time of launch.

IRP may not be perfect, and the end of IRP would be welcomed by many stakeholders (in industry and payer circles alike) as the end of a system that many perceive to introduce perverse incentives - but, like GDP, it has proven itself markedly resilient.