Iraq’s Supreme Court Decision in Case 59 and Unified 110: What Should Investors in the KRI Do?

In February 2022, Iraq's Federal Supreme Court (FSC) issued a decision in relation to Case 59/Federal/2012 and Unified 110/Federal/2019. Depending on how this decision will be applied, it might have negative consequences for the oil and gas companies that, over the past 15 years, have invested in the Kurdistan Region - Iraq (KRI) petroleum sector.

The court stated the Kurdistan Regional Government's (KRG) Oil and Gas Law No. 22 of 2007 (2007 KOGL) was unconstitutional, as it violated Articles 110, 112, 115, 121, and 130 of the Iraqi Constitution of 2005. Moreover, the court also stated, inter alia, the KRI's oil production had to be under the control of the federal government and that Iraq's Ministry of Oil was given the authority to nullify the petroleum contracts the KRG had signed with "foreign companies" and "states" in relation to all phases of petroleum operations.

The purpose of this legal insight article is first, to highlight the investment protections currently offered by the KRG's 2007 KOGL and 2007 Model PSC, which are the two documents at the foundation of an independent KRI's petroleum sector, and second, to try to understand whether these protections can still shelter investors facing an aggressive implementation of the FSC's decision.

Both the 2007 KOGL and the 2007 Model PSC provide flexibility with reference to the arbitration paths that the parties may use to solve a dispute in the oil and gas sector. This translates in a high dispute resolution score for the KRI in S&P Global's Peps Legal and Contractual Ratings as shown in the slide below.

According to Article 50 of the 2007 KOGL, an investor and the Minister of Natural Resources of the KRI must first try to solve a dispute via negotiation. If this fails, an arbitration will be carried out based on five alternative types of arbitration rules. According to Article 42 of the 2007 Model PSC, after the parties have tried to resolve their dispute through three successive pre-arbitration procedures (good-faith negotiation, senior representatives' negotiation, and London Court of International Arbitration (LCIA) Mediation Procedure), they may resort to a three-arbitrator arbitration panel based on the Rules of the LCIA. The place of arbitration is London, and the arbitral award is final. The arbitral tribunal may also amend the PSC and restore the economic position present on the date of the signature of the PSC.

Possible Consequences of the FSC's Decision

For foreign contractors in the KRI, the issue is to understand how much of this decision will be applied in the future. This point is quite unclear. A complete application of the FSC's decision with, under a worst-case scenario, possibly the termination of the PSCs already signed, would open the way to unfathomable lawsuits. Since the issuance of the decision, there have been various announcements, but no clear indication, of the future steps. Most recently, first, the federal government has asked the petroleum firms operating in the KRI to sign new contracts with the State Organization for Marketing of Oil (SOMO), and second, it has summoned some of these companies to appear before the federal Commercial Court in Baghdad. Concomitantly, SOMO has stated that it wants to file international lawsuits against the companies operating in the KRI.

Under the worst-case scenario, represented by the nullification of the KRG's contracts, in theory, this might result in a breach of Iraq's bilateral investment treaties (BITs). Through the BITs Iraq grants protection to foreign investors and the possibility of solving disputes before arbitral tribunals under the rules of either the International Centre for Settlement of Investment Disputes (ICSID) or the UN Commission on International Trade Law (UNCITRAL). However, there are two important caveats:

The table in the slide below shows the current BITs and TIPs involving Iraq. 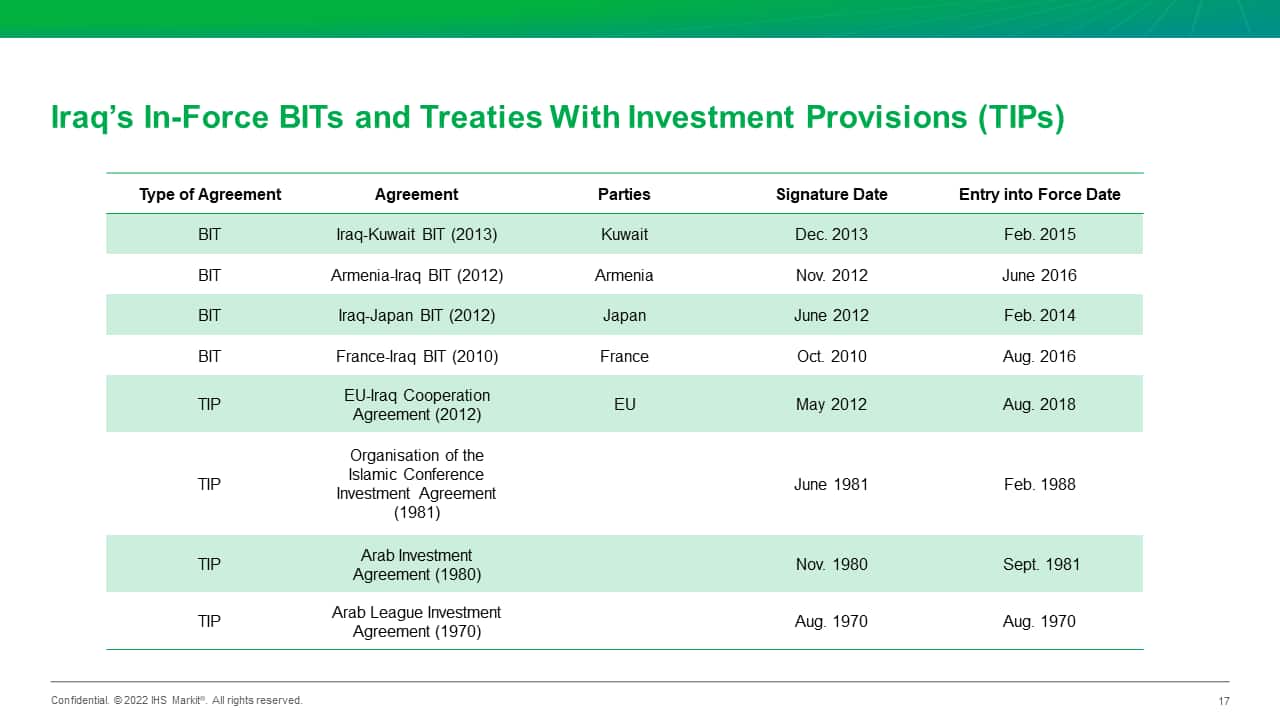 It is premature to gauge how the FSC's decision will impact foreign companies working in the KRI's petroleum sector. Concerning the dispute resolution mechanism, the KRG has had, until now, one of the world's most investor-friendly regimes. The worst-case scenario resulting from the decision would be the nullification of the foreign investors' petroleum contracts. It seems difficult for foreign investors to invoke the protection of a BIT or a TIP, when, in the first place, one of the country signatories to the investment agreements, i.e., Iraq, from the beginning, has always considered the KRG's oil and gas contracts illegal. From our side, we will continue to monitor "if," "when," and "how" the FSC's decision will be applied. Meanwhile, we recommend foreign investors in the KRI avoid taking for granted the possibility of applying a specific dispute resolution mechanism, as there are many legal uncertainties, so that a positive result is far from being guaranteed.

This article is an excerpt from the longer, more detailed legal insight "Can Iraq's Supreme Court Decision in Case 59 and Unified 110 Negatively Affect Investors in the Kurdistan Region - Iraq (KRI)?" which was published on May 20, 2022, and it is available only to our subscribers.

Want to learn more on this topic and access similar reports? Try free access to the Upstream Oil & Gas Hub to explore selected energy research, analysis, and insights, in one integrated platform.