October experienced the lowest monthly totals in both non-state armed group attacks and subsequent fatalities since the Islamic State's formation of the 'caliphate' in June 2014 – highlighting the extent of the degradation of the group's armed campaign in Iraq.

A wider overall decrease in violence has been observed since a peak recorded in June 2016. However, while the decrease in attacks in September was accompanied by an increase in resultant non-militant fatalities, these associated deaths shrank drastically in October alongside the fall in attacks.

Both non-state armed group attacks and resulting fatalities represented the lowest monthly totals since the formation of the Islamic State and the declaration of the caliphate in June 2014, highlighting the extent of the decrease in operational activity by the group in Iraq. While this process has been ongoing since June 2016, the pace of operational decline has increased over the previous 12 months; the 126 attacks in October represented almost half the peak recorded in January, while the 102 fatalities represented an 80.0% decrease from November 2016.

As JTIC has highlighted over previous months, the steady territorial degradation of the Islamic State's self-proclaimed caliphate has increasingly led the group to revert to asymmetric operations, typified by low-level attacks targeting the security forces and higher profile attacks against civilian sectarian targets.

The absence of any mass casualty violence meant that these Islamic State attacks resulted in 76.6% fewer fatalities in October, and proportionally the group decreased from accounting for 63.4% of fatalities in September to 29.4% in October. This was reflected in specific operations conducted by the group. For instance, in September the Islamic State conducted 22 suicide attacks, resulting in 93 fatalities. This dropped to 15 attacks and seven fatalities in October. Notably, 80.0% of those 15 attacks were either disrupted by the security forces prior to detonation or resulted in no fatalities beyond the attacker/s – an increase from 72.7% in September. 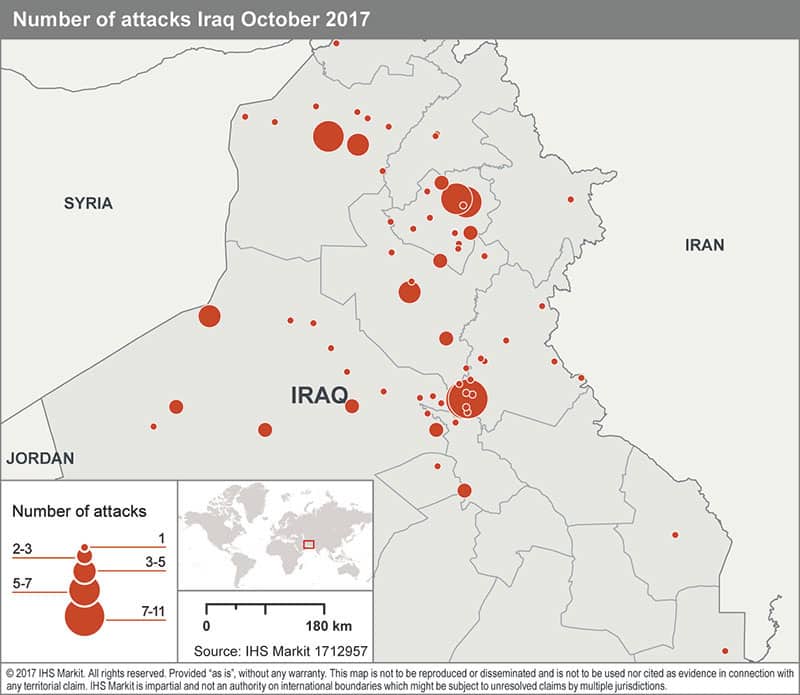 Notes about the report

The intelligence cut-off date for this report was 20 November 2018. JTIC defines non-state armed groups as actors, not part of a state, who engage in violent activity for political or ideological objectives. Information from social media that could not be verified through conventional and trusted news sources is not included in the report.