The gradual and sustained improvement in Greece's manufacturing sector and wider economy has fuelled renewed appetite to invest in government bonds, yields on which have fallen to record lows. Alongside a push by the new government to generate backing for infrastructure developments, investors have turned their gaze towards Greece, with the country's credit rating stepping closer to investment grade, representing a major turnaround in investor appetite from the dark days of the eurozone debt crisis.

Although larger eurozone economies struggled through the latter stages of 2019, the Greek manufacturing sector has bucked the trend and remained on a steady course to recovery. The IHS Markit Manufacturing PMI has posted above the 50.0 neutral mark (which separates expansion from contraction) since June 2017, with the average reading for 2019 reaching the highest since 2000. As well as being a 19-year high, Greece's average manufacturing PMI reading was also the highest of all 31 countries covered by IHS Markit's surveys. Germany, in notable contrast, reported the lowest average PMI worldwide in 2019. 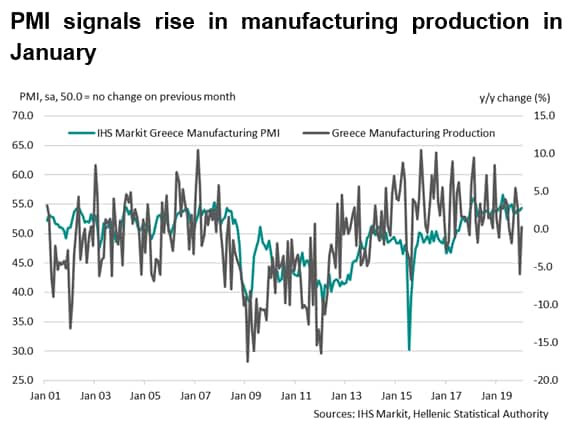 Supporting the sustained expansion has been a strong increase in foreign client demand, with new export orders rising despite reports of challenging external demand conditions in other key eurozone economies. It remains to be seen how stable external sales will be in 2020 as headwinds gather in the global economy. 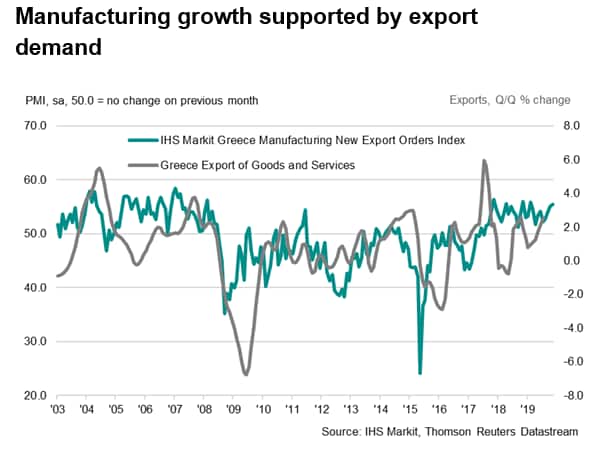 Although overall industrial production (adjusted for working days) fell by 0.6% throughout 2019, the manufacturing sector fared better, recording an expansion of 1.2%. After dipping in December, the PMI recovered in January following stronger output and new order growth. The upturn in manufacturing has had the spill-over effect of boosting employment. As such, the IHS Markit Greece Manufacturing PMI Employment Index reached a new series high at the start of 2020 as firms commonly stated that greater production requirements were driving workforce numbers up.

At the same time, firms anticipate production to rise over the coming year, with output expectations strengthening to a series high (since July 2012) at the start of 2020. The uplift in optimism was partly linked to hopes of a boost to investment and further robust new order growth. 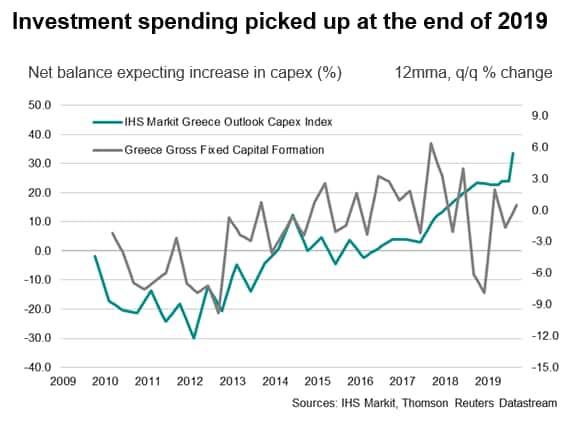 The opening month of 2020 also saw a boost to confidence in the wider Greek economy as Fitch upgraded the country's credit rating to BB. Although still below investment grade, investors themselves were attracted by the rise and signalled a strong desire to buy into Greece's recovery when new 15-year bonds were recently put up for sale. Such confidence in Greek bonds was also demonstrated when ten-year borrowing costs dipped to a record low and below 1% for the first time, as investors sought positive yields.

Brighter news from markets may translate into new long-term investment in Greece, with hopes that large-scale infrastructure projects will begin throughout 2020. As a result, infrastructure investment is expected to boost economic growth over the coming 12 months. Although the European Commission, Greek government and IHS Markit are forecasting stronger economic growth in 2020, the rate of expansion is expected to ease on average over the next five years.

Downside risks to these forecasts remain ever-present, as the banking sector struggles to catch up with the wider economic recovery, burdened with non-performing loans. Also, external demand conditions, which have been so important in the re-emergence of the manufacturing sector, appear finely balanced, with the coronavirus representing a new and uncertain risk to the short-term outlook. Stability in foreign client demand is necessary to sustain investor interest and private sector sales. 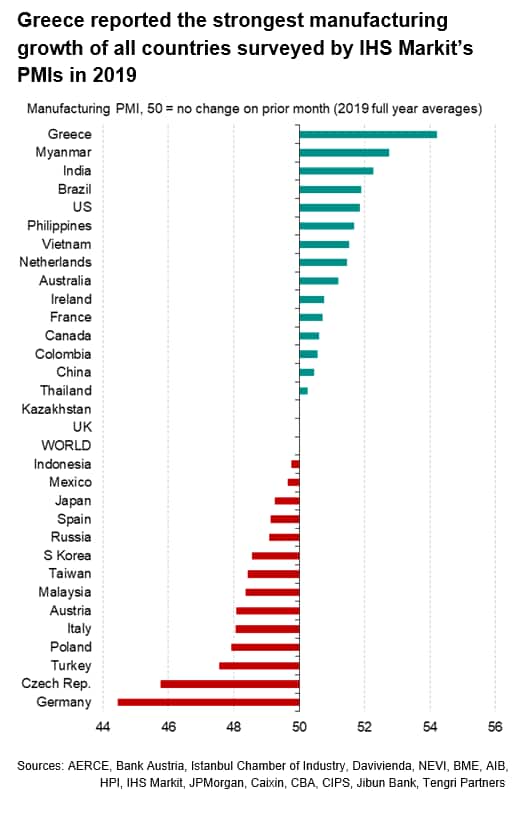