The global economy ended 2018 on a disappointing note as survey indicators of growth, employment and business sentiment all deteriorated in December. Perhaps most worrying is a marked deterioration in capex indicators, notably in demand for business machinery and equipment, which has slipped into decline to signal a reduced appetite for investment spending among companies globally.

Slowest growth for over two years

The JPMorgan Global PMI™, compiled by IHS Markit, sank to its lowest for 27 months, extending a slowdown trend that has been evident throughout the past year. 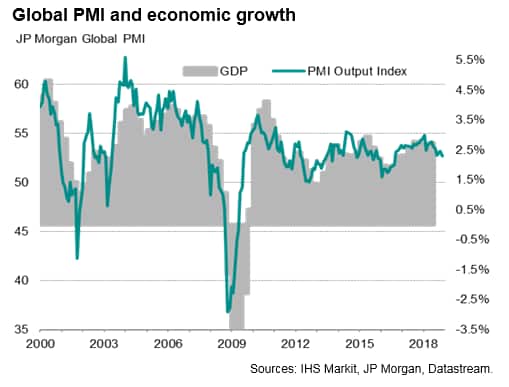 The latest reading of 52.7 is commensurate with worldwide GDP growth slowing close to 2%. Other indicators showed new order inflows at their lowest since September 2016 and job creation hitting a 20-month low. Optimism towards the year ahead meanwhile slipped to its weakest for two-and-a-half years, suggesting the slowdown has further to run.

Deteriorating goods trade once again sat at the heart of the slowdown. Global goods exports dropped (albeit only modestly) for a fourth straight month to act as an ongoing drag on the manufacturing sector. Global manufacturing growth fell to its weakest for over two years as a result, with the number of countries reporting deteriorating business conditions rising to one-in-three. By comparison, a little over a year ago only one country (Colombia) reported a deterioration of manufacturing business conditions.

Service sector growth remained more resilient, though also lost some momentum to register the second-smallest expansion of activity for just over two years. 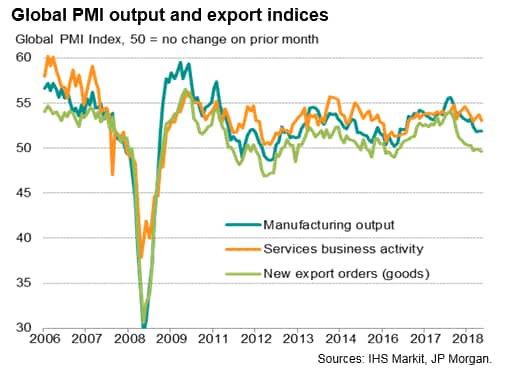 Developed and emerging market growth differentials narrowed, as recent months have seen slower growth in the former, caused to a large extent by weakened European growth, alongside an improved emerging market trend. 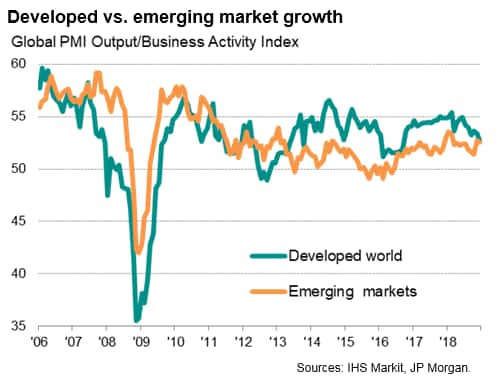 Developed world growth waned at the end of 2018 to its weakest since September 2016, continuing the slowdown seen since the start of the year. Emerging market growth remained more resilient, dipping only slightly from November's nine-month high. The gap between the outperformance of the developed world relative to emerging markets consequently narrowed to one of the smallest seen over the past five years.

Among the major developed markets, the strongest expansion was again seen in the US, while the eurozone and UK recorded especially modest rates of growth. Eurozone growth was the weakest in over four years while the UK saw growth splutter to one of the weakest since 2013.

In the emerging markets, the strongest gains were seen in India and Russia, though both China and Brazil saw growth accelerate slightly. 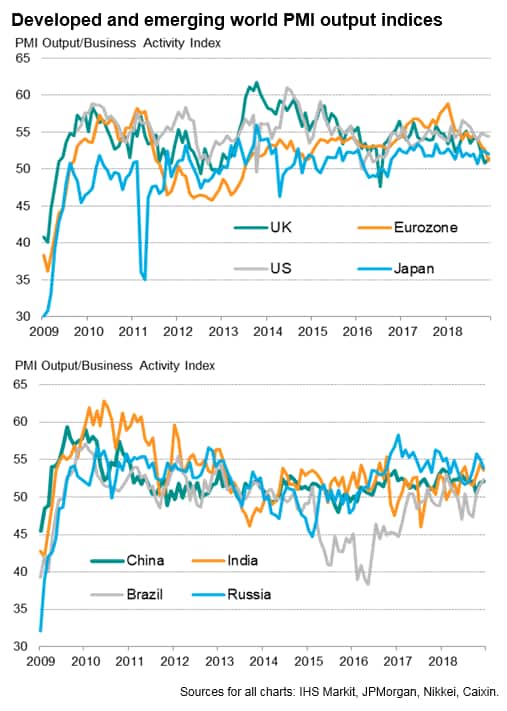 Global sector PMI data allows a deeper dive into the survey trends, and showed that typically 'defensive' - or non-cyclical - sectors enjoying the strongest growth in December, including pharmaceuticals, insurance and food and drink.

More cyclical sectors fared much worse, especially manufacturing and capex-related sectors. Basic resources sectors such as metals & mining and forestry & paper products - generalist sectors that are heavily depending on industrial growth - saw the steepest rates of decline of all the detailed sectors monitored. Auto makers meanwhile reported the largest drop in output for over three years, with an especially sharp fall again seen in Europe. 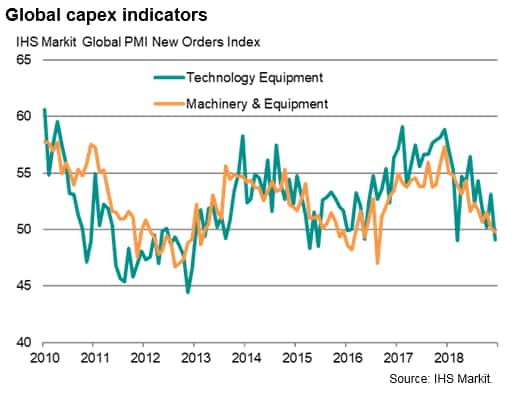 Importantly from a global capex perspective, machinery & equipment makers and tech equipment producers saw growth trends continue to weaken, with output in both sectors at or near stagnation in December. New orders fell slightly in both sectors during the month, representing a marked contrast to the booming inflows of new orders for such goods recorded earlier in the year and underscoring the turnaround in firms' appetite for capex spending that is indicated to have occurred during 2018. 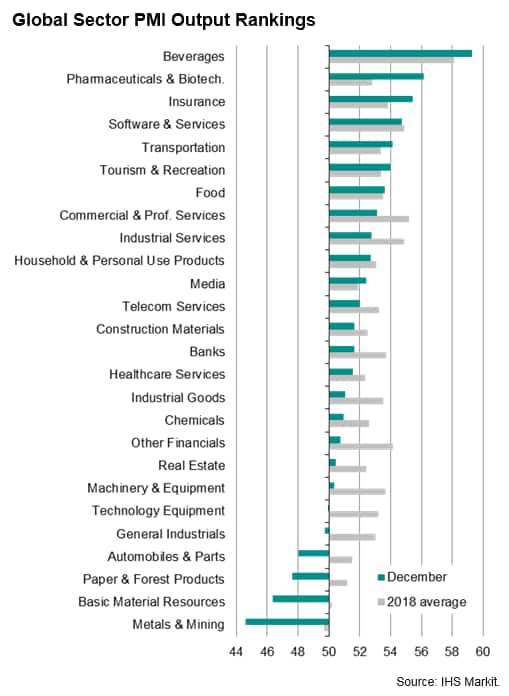