PMI surveys ask respondents to report on monthly changes in key business metrics, such as production, new orders, employment and prices. Estimating what the resulting survey indicators imply for actual changes in official economic data is not always straightforward, but by using historical comparisons we can extract powerful signals from the surveys. In this analysis we look at the manufacturing PMI output indices for the Eurozone and the UK, and demonstrate how accurate advance signals of official production data can be obtained. We also look at what this means so far for post-COVID 19 recoveries.

Cutting though the noise

The output index from IHS Markit's PMI surveys is derived from a question asked of companies as to whether their output increased, decreased or remained unchanged compared to the prior month. The percentage of respondents reporting an increase are assigned a weight of 1.0 and those reporting no change are accorded a weight of 0.5. Those reporting a decline are weighted zero. Therefore, if 100% of the survey panel reports an increase, the resulting index hits 100. Similarly, if 100% of companies report no change, the index comes in at 50.0 (100% x 0.5). 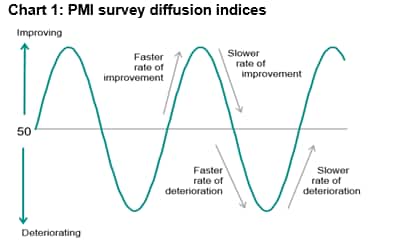 The actual indices are slightly more sophisticated, in that individual responses are weighted according to the size of each company and the relative size of the subsector in which they operate. The diffusion indices are also adjusted for normal seasonal variations.

The resulting indices are highly regarded for their low volatility, which helps to provide clear indications of turning points in the variables being monitored. Generally speaking, three months of continued upward or downward movements in an index are considered indicative of a change in the underlying trend. The PMIs therefore give policymakers, economists and other decision makers clear signs of changing business conditions.

However, if a moving average is used to smooth the official data (as shown by the orange lines), it is clear that the PMI is in fact providing an accurate advance guide to changes in the underlying trends in the official data.

In other words, the PMI indices are cutting through the monthly noise in the official data, albeit at a cost of missing some of the more volatile monthly changes in output. This cost is more than offset, however, by advance information that the PMI indices have for understanding underlying growth rates. 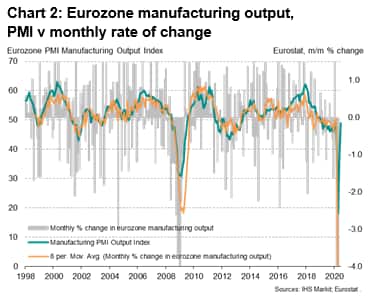 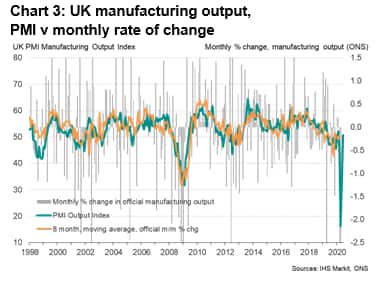 To further illustrate, we plot the same Eurozone and UK PMI manufacturing output indices against the three-month-on-three-month (or quarterly) growth rates of the comparable official data, which reduces some of the volatility of the official data.

The correlation of the UK PMI output index with official data jumps from 44% to 75% when compared to the three-month rate of change rather than the monthly percent change. For the Eurozone, the correlation rises from 52% to 83%. 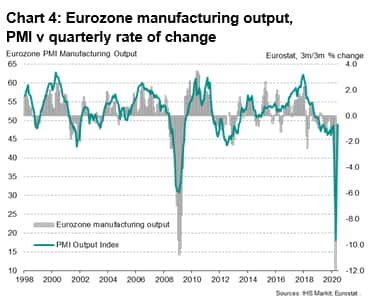 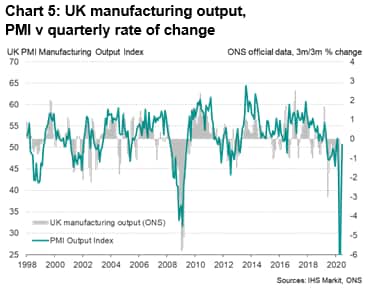 Similarly, higher correlations are also observed - and the visual fit improves further - when the PMIs are compared to annual rates of change in the official data (see charts 6 and 7), though in these comparisons it is evident that the PMIs change direction earlier than the official data, again highlighting the powerful value of the PMIs in providing early indications of changes in underlying growth rates. 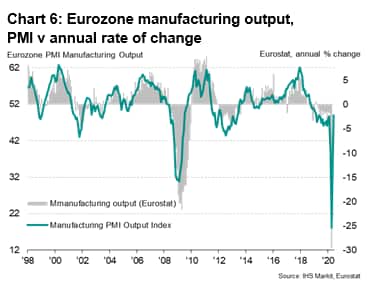 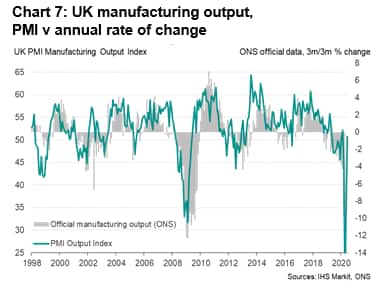 Quite why the PMI manufacturing output indices do not show the same volatility as month-on-month changes in the official production data is potentially due to a number of factors.

First, in many instances, the official data can be dominated by a large change in production in one firm or one specific sector. Autos, pharmaceuticals and aeroplane manufacturing, for example, can change dramatically from one month to the next and cause considerable shifts in the headline production data. By being a diffusion index, based on firms reporting if production has risen or fallen, the PMIs will not be as heavily influenced by such a dominating element of manufacturing. However, we ask for simple up/down/same responses because this allows companies to give easy and quick responses, which provides strong indication of trends long before the official statistics bodies can fill in the extra detail.

Second, there is some evidence from anecdotal reports provided by survey respondents alongside their higher/same/lower responses, that variance with official data might occur because the PMI respondents report on the production trend rather than actual month-on-month changes. Although the questionnaire stipulates the reporting of monthly changes in production (in volume terms), it is possible that some firms report on the trend, perhaps perceiving this to be a more accurate guide to what's really happening in their firm if production has been distorted by factors such as routine maintenance or holidays. This does not mean the responses are sentiment based, but simply that companies are looking at a broader picture than just the noise of one month's volatile production.

Third, in a similar fashion, some companies appear to make their own adjustment for seasonal variations when reporting to the surveys, therefore eliminating some of the noise in their responses from month to month to give a better indication of the underlying trend. Again, this does not infer sentiment is dominating the response, just that seasonal norms are being taken into consideration when firms are reporting.

Looking at PMI readings during the COVID-19 pandemic further underscores how the PMIs should not be used as literal indicators of month-on-month changes, but instead as indicators of broader rates of change - ideally three-month-on-three-month or annual percent changes, as suggested by the higher historical correlations.

We can use simple OLS regression analysis to infer quarterly rates of change in production from the PMI, with the natural log of the output index [*] acting as the sole explanatory variable of changes in official production data.

For the Eurozone, the rise in the June PMI manufacturing output index to a 13-month high of 48.9 is indicative of output falling across the eurozone at an annual rate of just 2%. That compares with a 30% rate of contraction signalled back at the height of the lockdowns in April, when the PMI output index sank to an all-time low of 18.1. This remarkable turnaround implies very strong month-on-month gains in the official production numbers for the past two months as factories have increasingly restarted fuller production after temporary closures. Official data are so far only available up to April, and showed a 30% annual rate of decline.

In the UK, the rebound has been even stronger. Having sunk to an unprecedented low of 16.3 in April at the height of the coronavirus lockdown, the manufacturing PMI output index has surged to 50.7 in June. This implies an easing in the annual rate of contraction from -24% in April to just -0.6% in June. Official data for the UK are only available up to April, and likewise showed a 24% contraction.

Using the PMIs to estimate quarterly growth rates sends a similar message of strong improvements in recent months. An OLS regression-based model for the Eurozone, again using the natural log of the PMI output index as the explanatory variable, indicates that the three-month-on-three-month rate of decline eased from -14% in April to just -0.7% in June.

For the UK, a similar model points to the quarterly rate of decline moderating from almost -10% in April to just -0.3% in June.

The latest available comparable official data for the Eurozone and UK put the April quarterly rates of contraction at -13.3% and -10.5% respectively, which are very similar to the PMI signals of -14% and -10%.

Both the Eurozone and UK PMI surveys therefore provided very accurate indications of the scale of the downturns at the height of the COVID-19 lockdowns in April. Since then, the substantial moderations in the annual and quarterly rates of contraction signalled by both surveys hint at strong monthly gains in production during May and June.

So far the surveys therefore paint a picture of V-shaped manufacturing recoveries in both the Eurozone and the UK as firms have emerged from lockdowns and enforced temporary closures. Whether the full output lost to the pandemic is quickly regained will depend on the extent to which demand can continue to strengthen after the initial re-openings of the economies. Future PMI data will provide early insights into whether these initial recoveries are sustained or whether momentum wanes. 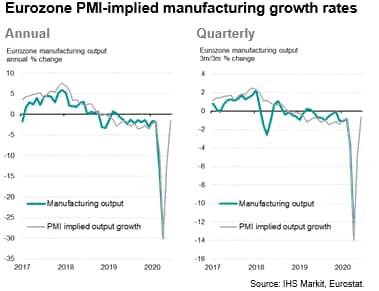 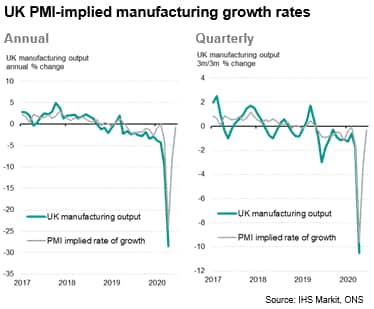 * The natural log is used to help capture the more extreme changes if official production data are times of crisis. See Nowcasting European GDP during an economic shock