As insurgent groups grow and evolve, they naturally progress towards more sophisticated intelligence capabilities.Michael Horton, writing for Jane's, analyses a range of groups' intelligence collection activities and how their capabilities are likely to evolve.

War imposes heavy monetary and emotional costs on the state and its people, and therefore military strategists have long advocated the extensive use of spies and espionage to mitigate the cost and duration of conflict. Espionage is cost effective and - when conducted well - one of the most effective force multipliers. This is particularly the case for insurgent groups that are usually at a numerical, financial, and technological disadvantage compared with state-based forces. Many insurgent groups are enhancing their ability to collect and act on intelligence.

Insurgent and militant groups have almost always tasked some of their members with collecting strategic, tactical, and counter-intelligence (CI). Larger and more established groups, such as Hizbullah, have developed well-structured and increasingly formalised intelligence wings that collect and interpret human intelligence (HUMINT) and signals intelligence (SIGINT). Given the level of funding and political reach of such large groups, developing an intelligence wing is a natural evolution.

Of particular concern to nation-states is how less well-organised and -funded insurgent groups are rapidly developing and refining their intelligence capabilities in ways that contribute to accuracy, adaptability, and resilience. The intelligence wings of these groups, such as Harakat al-Shabaab al-Mujahideen in Somalia and Al-Qaeda in the Arabian Peninsula (AQAP) in Yemen, utilise flat networks - with few layers of hierarchy - that prioritise HUMINT. These organisations' approach to HUMINT relies on deep context, which is a comprehensive understanding of cultural, political, and economic terrain.

At the same time, these smaller insurgent and militant organisations have adopted critical aspects of state-based intelligence services, such as compartmentalisation, for CI operations. This fusion of state-based techniques with novel and adaptive approaches to intelligence collection could give these smaller groups an advantage over their enemies, particularly nation-states.

Other insurgent and militant organisations, such as Al-Shabaab, AQAP, and the Islamic State, lack what Hizbullah has in relative abundance: a willing state backer, funding, secure operational space, and access to relatively advanced technology and weaponry. This lack impedes the growth of these groups on some levels, but deficiencies also spur innovation and require higher levels of resilience. In contrast with Hizbullah, Al-Shabaab, AQAP, and - to a far lesser degree - the Islamic State have built intelligence wings that are organisationally flat and reliant on HUMINT. 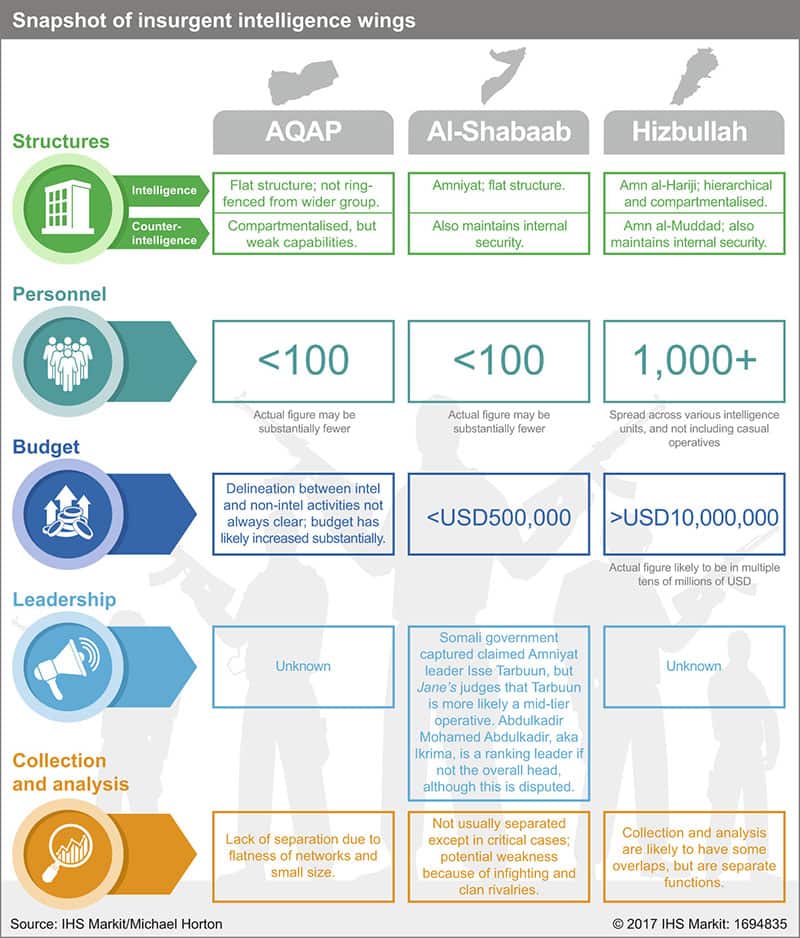 All three of these insurgent intelligence wings place a premium on HUMINT, partly because they lack the technological resources to develop SIGINT capabilities. However, even if they could develop greater SIGINT capabilities, HUMINT would remain fundamental to their intelligence operations because all three groups - to varying degrees - recognise the importance of 'deep context', a comprehensive understanding of the cultural, political, and economic terrain that they inhabit and want to dominate.