Widespread business closures and social distancing measures intended to mitigate the spread of COVID-19 led to sharp declines in economic activity throughout the country from April through early May according to the US Federal Reserve's latest Beige Book report, containing anecdotal information from regional business contacts. Continued business closures and social distancing measures in the Northeast and along the West Coast led to sustained contractions in consumer spending and employment in those regions. Widespread layoffs, especially in hospitality, retail trade, and tourism-related activities hammered employment in busy urban areas. Less-severe lockdown measures in the Midwest still resulted in large drops in economic activity. Food manufacturers throughout the Plains state and the South contended with shutdowns as COVID-19 infections spread through their workforces. Lower demand for steel from the energy sector combined with temporary shutdowns of auto manufacturing plants in the Midwest resulted in rapid declines in durables manufacturing activity across most regions. While homebuilding remains limited in the Northeast as restrictions on worksites persist, existing projects started up in the South and Midwest. 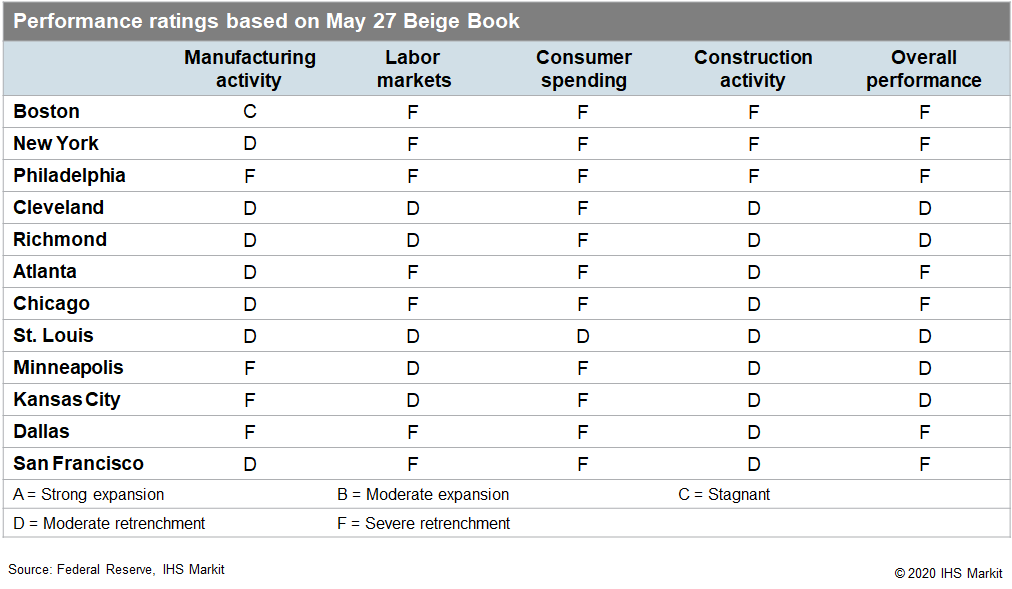 Consumer spending remained locked in decline in much of the country but was especially severe along the West Coast and in the Northeast. Continued stay-at-home orders and social distancing rules in these regions have made travel and tourism difficult, shutting sports arenas, theaters, and many hotels, while nonessential business closures rendered dine-in restaurants without take-out capabilities completely closed. Auto dealers in the Mountain West and Northeast noted some pickup in May as in-person sales were allowed to resume. While apparel and furniture retailers were hit the hardest by mandated closures, grocery stores saw strong growth in the middle of the country. New York area businesses are pessimistic about summer travel due to cancelled conventions, expected low level of international visitors, and the continued closure of Broadway theaters. Businesses in the South and Midwest expect a rebound in summer travel. Many businesses plan to increase marketing of their "reopening" strategies including mask-wearing, social distancing, and intensified disinfecting procedures.

Labor markets contracted throughout the country as business closures and the spread of COVID-19 led to severe drops in demand. Arkansas, Missouri, and areas north into the Plains and upper Midwest fared somewhat better as employment fell at a less precipitous pace than along the West Coast and in the Northeast. Widespread layoffs in the Northeast were concentrated among retail, hospitality, and tourism-focused firms. Grocery stores, logistics companies, and food manufacturers, especially those around the Great Lakes and in the South, increased staffing to meet demand. Firms receiving Paycheck Protection Program loans in the Midwest and South indicated that the funds helped them to avoid layoffs. As states began to reopen their economies, many firms across the country worried that virus concerns, lack of childcare, and generous unemployment benefits would make recalling workers more difficult.

Manufacturing activity slipped further in the mid-Atlantic and around the Great Lakes. Temporary production suspensions at major automotive factories led to large output declines. While many firms saw steady reopening of Chinese supplier facilities, concern grew among manufacturers in the Northeast and Midwest about delays in reopening plants in Mexico as that country's outbreak continues. The collapse in oil and gas demand hit Texas manufacturers hard and reverberated to the sector's suppliers of steel in the Pacific Northwest and Midwest. Food producers in the West and the Plains states dealt with production declines as some processing facilities closed when COVID-19 infections were discovered among employees. Many firms are adjusting to social distancing measures, the need for less capacity, and maintaining a safe environment for production employees.

Construction activity fell in many regions but essentially "remained at zero" in the New York area as restrictions on worksite activity stayed in place. While these restrictions are scheduled to be eased, homebuilding throughout the Northeast is expected to be at low levels with few hints at pickups in future housing starts. In the South, existing construction projects continued as worksites were reopened, but other projects were postponed or delayed especially on the commercial construction side. Some homebuilders in the Midwest experimented with online sales with little success. Commercial construction companies around the Great Lakes indicated that the potential for plummeting public sector revenues and financially distressed universities could limit the availability of building projects in the future. Similarly, West Coast firms worried about lack of interest in new construction of hotels, restaurants, and large venues as social distancing becomes the norm.

This month's Beige Book pointed to widespread and severe contractions in economic activity. While the hardest hit regions were the Northeast and West Coast as lockdowns and business closures persisted, the Midwest and South shared in severe drops in employment and consumer spending as well. Tourism and travel, the engines of consumer spending in the South, California, and major metro areas, will remain limited as restrictions on large gatherings of people persist. Recovery from these sudden drops in spending and hiring will be linked to the length of local and state shelter-in-place orders and the extent of consumer caution as restrictions are gradually lifted which will depend on the virus progression. Manufacturers in the Midwest and South will face production difficulties as virus mitigation efforts result in recurring shutdowns for cleaning, supply chain disruptions, and demand destruction as the economy slows. As social distancing becomes the norm, construction projects such as hotels and event venues will be limited in number. Homebuilding will remain sluggish in the Northeast and Midwest as job losses mount.