Following the resounding victory by Alberto Fernández over President Mauricio Macri in Argentina's August primaries, it was no surprise that Peronist candidate Fernández won the presidency on 27 October in the first round, with 48% of the votes. Argentina's economy has been in a deep recession, with a current inflation rate of 55% and a depreciated currency at 60 pesos per US dollar. Although Fernández has been unclear in his policies, it is likely that the economic and political environment in Argentina will transition into one of greater state intervention and increased capital controls. Lack of clarity also surrounds the impact that running mate, former president Cristina Fernández de Kirchner, will have on policies. During her presidency, Fernández de Kirchner limited access to foreign investment by implementing protectionist policies. With the transition to a populist regime as the backdrop, Argentina's current environment begs the question: how will the development of Vaca Muerta be affected?

Argentina's crude production was 504,000 b/d in August, one-fifth of which came from the Neuquén Basin where Vaca Muerta is located. With an estimated recoverable resource at 16.2 billion bbl of crude oil, access to capital is key to successfully exploiting Vaca Muerta's full potential. The temporary oil price freeze, enacted by President Macri in mid-August to prevent runaway inflation, has cut into operators' profit margins. It is likely that development will be kept at a minimum until the price freeze is removed. Furthermore, without a clear picture of energy policies from newly elected president Alberto Fernández, investment in new projects will be delayed. Currently, only about 4% of the play has been developed. Energy Minister Gustavo Lopetegui has indicated that Vaca Muerta will require about $5-10 billion in investment per year. Investment includes the expansion of oil pipelines and new refinery configurations. There are currently three main refineries receiving crude from the Neuquén province, including Plaza Huincul, which will only run Vaca Muerta's lighter Medanito crude in 2021, after new installations and configurations have been made. With an average API of 40, interest for the lighter Medanito crude will likely come from the United States, Chile, and China, three markets that have received Argentine crude on a regular basis within the past year. Argentina's lighter Medanito crude properties allow it to compete with WTI, giving it a premium in price for the majority of 2019. 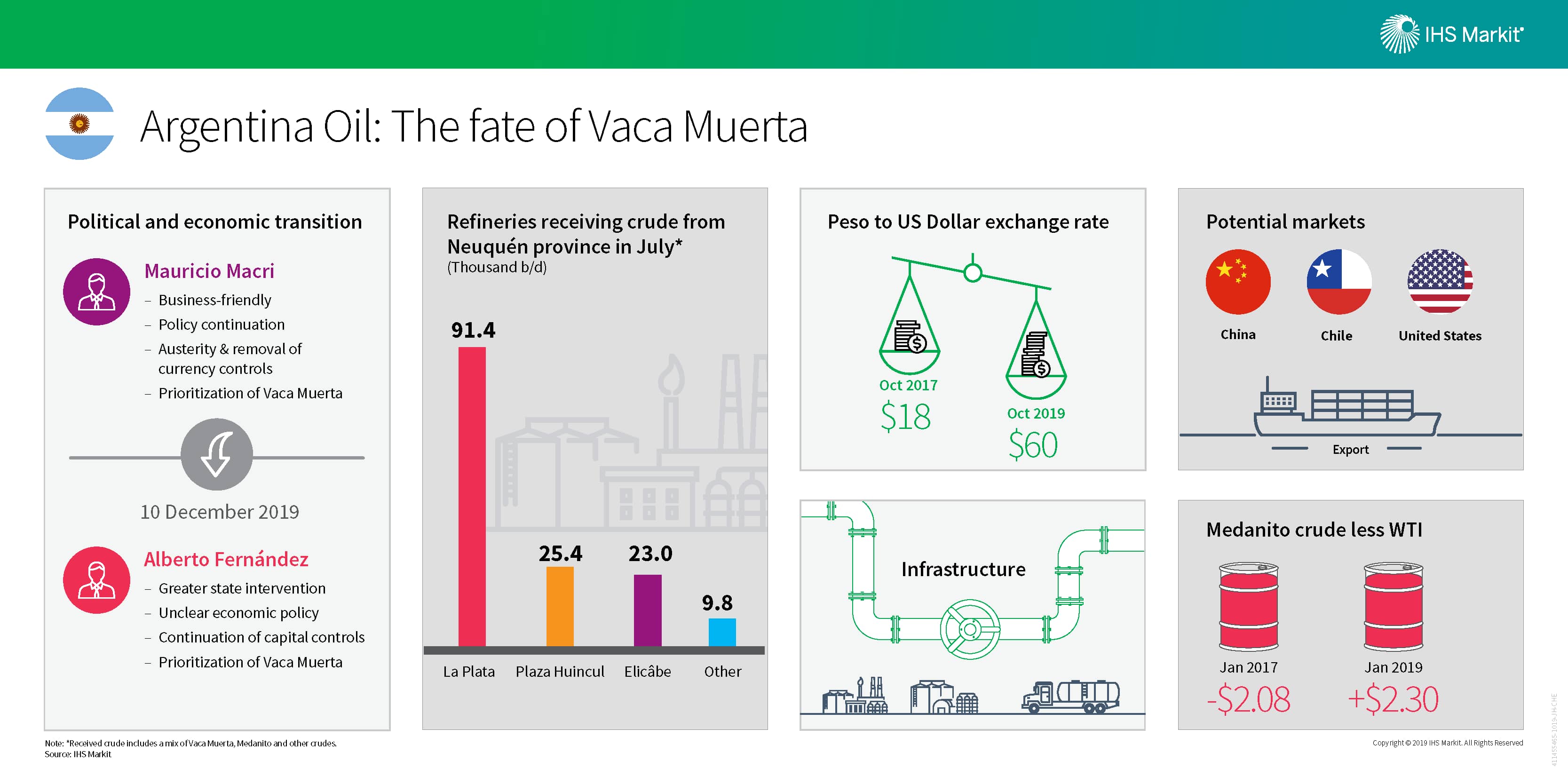 You may also be interested in...
Continue to gain valuable insight into IHS Markit Latin America Energy coverage