The Czech manufacturing sector has seen a marked expansion in output in recent months, as demand continued to recover from a tumultuous year amid the COVID-19 pandemic. Notably, PMI data for June signalled the fastest upturn in production since February 2018 as economies reopened and new order growth quickened. That said, output was reportedly hampered by severe input shortages in July, which have threatened to impede production capacities throughout 2021, and challenges sourcing key components in the automotive industry have resulted in shutdowns at some large producers. 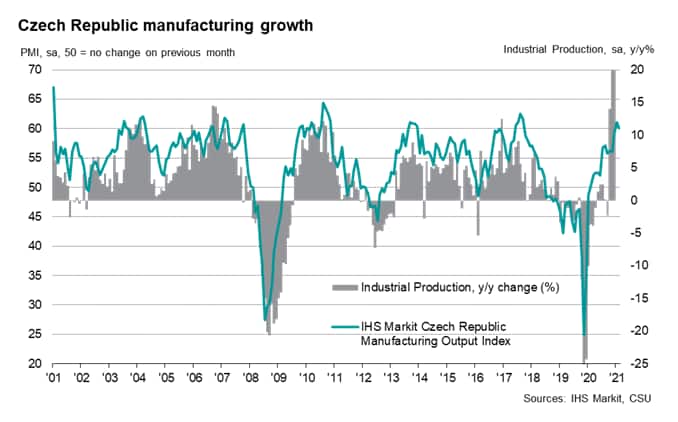 In fact, vendor performance deteriorated to the greatest extent on record in July, with delivery times lengthening to a more marked degree than was seen during the initial pandemic lockdowns in 2020. The resulting upward pressure on prices has led the Czech National Bank to raise interest rates once again in August, with expectations of further hikes through the rest of 2021.

Input costs faced by Czech manufacturers increased at the quickest pace since data collection began in June 2001 in July. In fact, the rate of cost inflation was the fastest of all PMI surveys across their respective histories. Alongside stronger global demand for inputs as economies reopen, firms stated that supplier stock levels had worsened at the start of the third quarter.

that their vendors were no longer able to take orders as shortages became more widespread.

Nevertheless, firms remained keen to get their hands on inputs, partly due to efforts to build stocks to ensure future production capacity. The rise in purchasing activity was among the fastest for around three-and-a-half years, as stocks of inputs were accumulated at the sharpest pace for just under 14 years.

A point of concern was found in the anecdotal evidence received from Czech manufacturing PMI panellists. Although stock building continued at a marked pace, some firms reported shutdowns at automotive customers, and some drop-off in demand from German clients. Germany accounts for a large proportion of total good exports from the Czech goods-producing industry, at around 30%. As a result, changes in demand from German customers can have a strong impact on the Czech manufacturing sector.

Uncertainty regarding demand over the coming months and shutdowns in the automotive sector amid substantial material shortages, weighed on output expectations across the Czech goods-producing sector in July, which slipped to a five-month low. 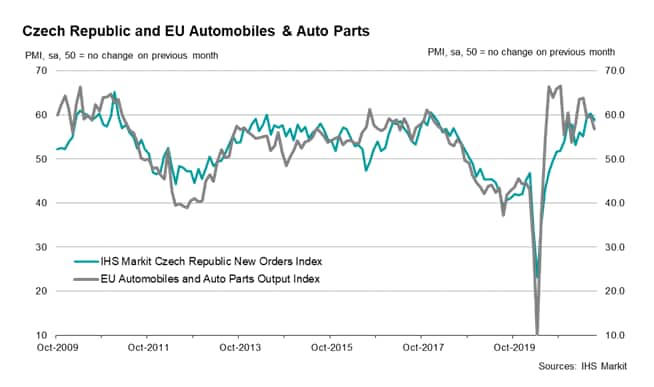 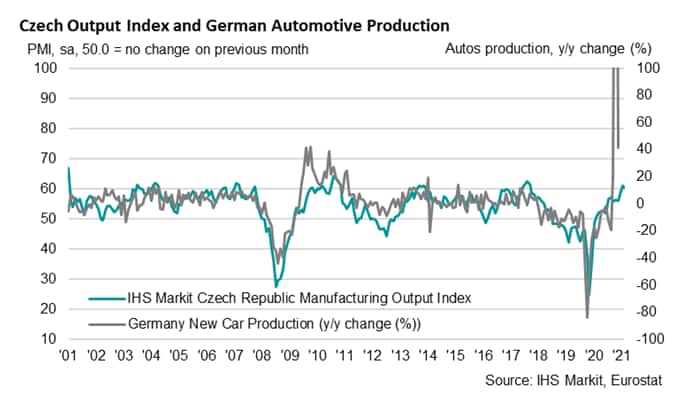 Although the rate of consumer price inflation (CPI) eased to 2.8% in June, down again from 3.1% in April, the speed of price increases and severity of inflationary pressures was enough to drive the Czech National Bank's (CNB) monetary policy committee to hike interest rates in both their June and August meetings. The target rate is 2%, with current forecasts anticipating that the pace of inflation will remain above this benchmark well into 2022. 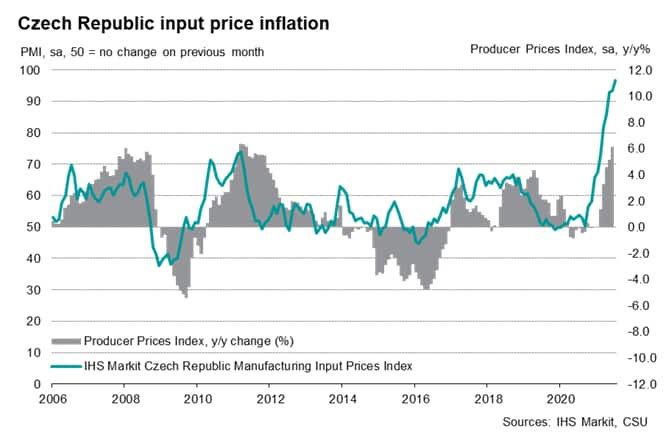 As a result, the governor of the CNB has stated that he is willing to raise interest rates further in 2021 and early 2022 to bring inflation back down to target. Our current forecast expects interest rates to rise to 1.75% by the end of 2022.