Inflation pressures and GDP resilience under scrutiny with May flash PMIs

What to watch in the flash PMIs for May

Flash PMI data for the US, eurozone, UK, Japan and Australia will provide the first major clues as to the health of the world economy mid-way through the second quarter. April's data had shown economic growth slowing in the US and UK as strong pandemic rebounds showed signs of fading. In contrast, a reopening of economies in the eurozone and Japan helped drive improvements, assisting in offsetting weakened manufacturing performances arising from fresh supply delays.

May's PMI data will therefore provide further insights into the extent to which the Ukraine invasion and China's lockdowns are damaging supply chains and adding to inflationary pressures. However, the service sector data will also be of great interest in assessing the degree to which price pressures are feeding through from goods to services, notably via wages, as these second-round inflation effects could have a major influence on monetary policy.

Importantly, the PMIs will also reveal just how resilient economies have been amid the growing headwinds of geopolitical uncertainty, supply chain issues and soaring inflation. The key leading indicators to watch in this respect will be the strength of demand signalled by the survey's new orders indices as well as the level of business confidence indicated by the future expectations indices. 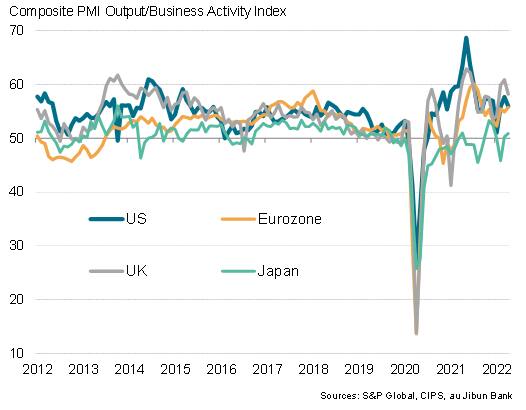 May's flash PMIs follow a resilient picture of growth accompanied by elevated inflation pressures from the April surveys. While the overall pace of expansion lost some steam, that was largely linked to a cooling in the service sector after a surge in demand for services in March due to the reopening of the economy. Encouragingly, manufacturing growth remained robust, mirroring a strong picture subsequently sent by official factory production numbers, which showed output up 0.8% in the month. The survey also showed strong hiring, later corroborated by the non-farm payroll data. All of which added to the view that the first quarter 1.4% annualized drop in GDP sent a misleading signal of the economy's underlying health, having been driven by trade and inventory factors rather than domestic demand.

Hence the May output and order book data from the PMIs will be important in assessing whether GDP will rebound in the second quarter, or whether a further GDP downturn could be on the cards, heralding a technical recession.

US PMI output and GDP 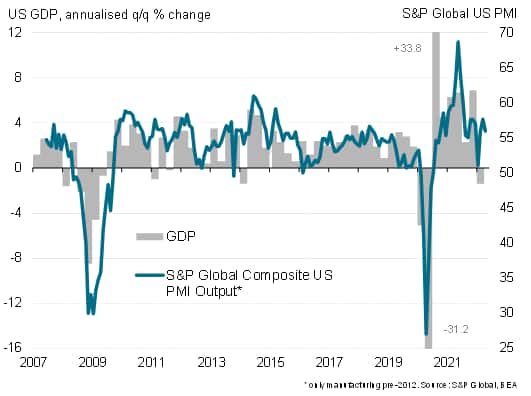 Perhaps of most concern from the April PMI data was a record surge in prices charged for goods and services. While the annual rate of inflation may be peaking due to base effects, any stubborn elevated PMI price index readings will fuel worries over the persistence of elevated inflation and an accompanying aggressive Fed rate hike path, all of which links back to recession jitters that had plagued the US equity market of late.

US PMI price and inflation 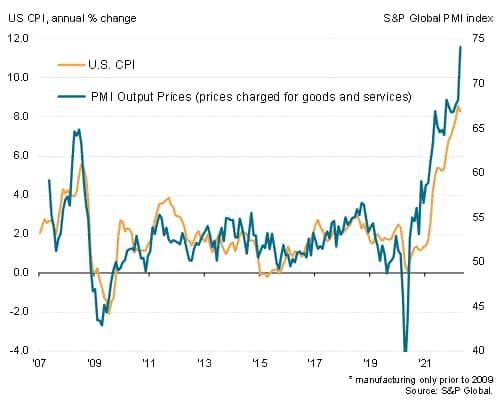 Growth in the eurozone surprised on the upside in April. Economists had been expecting the PMI to show a marked weakening linked to the war in Ukraine, but instead growth of business activity and new orders accelerated. While weakness was evident in manufacturing, which saw output growth almost stagnate, a strong rebound in service sector activity offset the factory sector's woes, with spending on services rebounding as COVID-19 related restrictions were eased. Two big questions for May will therefore be, first, the extent to which supply disruptions continue to weigh on the manufacturing sector and, second, the sustainability of the rebound in service sector growth, especially given rising inflationary pressures. 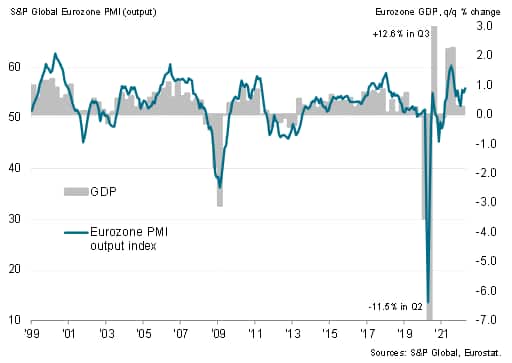 On the prices front, eurozone companies reported a record increase in average selling prices for goods and services in April as input cost inflation remained elevated at a near-record level. However, the rate of input cost inflation in fact eased slightly compared to March. If sustained, this easing could hint at a peaking of inflation, but any such easing looks unlikely as Europe remains especially vulnerable to rising energy prices in the wake of Russian sanctions 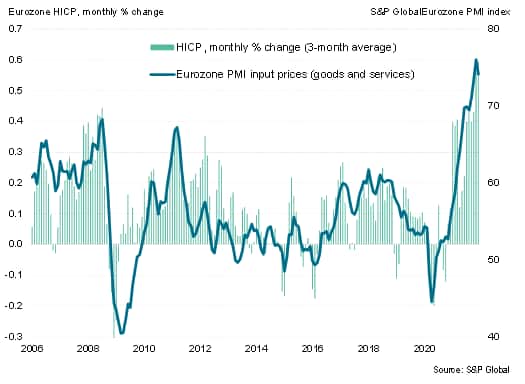 Thus, while April's data calmed concerns over a possible GDP decline in the second quarter, the business activity, new orders and future business expectations indices from the eurozone PMI will be eagerly assessed for clues as to the degree to which the economy might be slowing. These will be crucial pieces of information to assess for the FX market as investors mull the possibility of the euro's glide to parity with the dollar amid concerns over the growth outlook.

At the same time, supply chain and price indices - which correctly signalled the acceleration of CPI inflation to unprecedented heights in recent months - will be key in assessing the inflation outlook, especially in terms of any spill-over from manufacturing to services.

At 9%, the UK is grappling with the highest CPI inflation rate of the major developed economies, piling further pressure on the Bank of England to hike interest rates. Solid PMI output readings have added to scope for policy tightening. However, while April's PMIs remained relatively buoyant in the UK, cracks have appeared in the form of waning business confidence, falling exports and a stagnation of order book backlogs 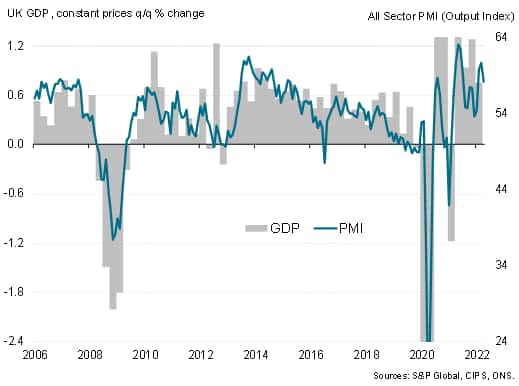 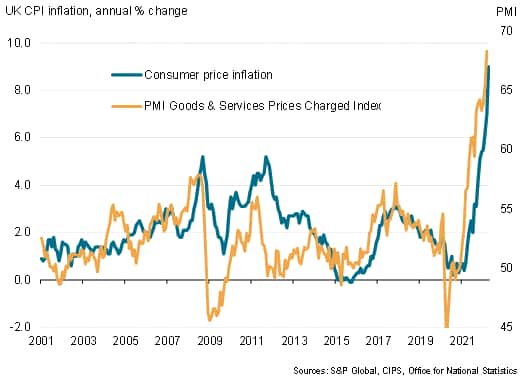 May's UK flash PMI surveys will therefore provide much needed clues as to whether further imminent rate hikes might fuel an economic downturn, or whether the UK has enough pent-up demand and savings to sustain its recovery.

A lifting of COVID-19 restrictions facilitated a rebound in business activity across Japan in April, albeit with the service sector merely eking out a marginal gain and manufacturing growth weakening slightly. Nevertheless, the survey data hint at the economy returning to growth in the second quarter after GDP slipped 0.2% in the first quarter.

Price pressures meanwhile intensified, linked to shortages emanating from China's lockdowns, plus rising energy and food prices - all factors which the weakened yen exacerbated. Looking to the May data, the weaker yen may help to boost exports, but businesses are growing more concerned about the effect on import prices. Meanwhile, the service sector should hopefully further benefit from the tailwind of the economy reopening from the Omicron wave, so any weakening of the services PMI will be a big disappointment. 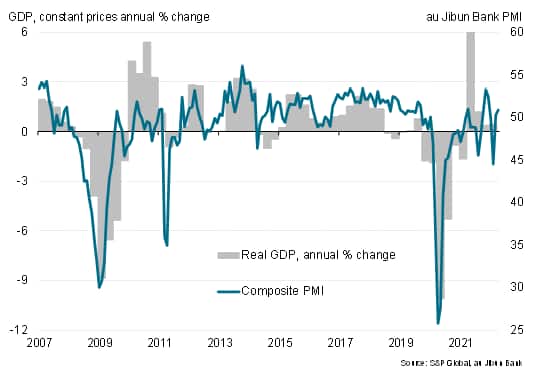 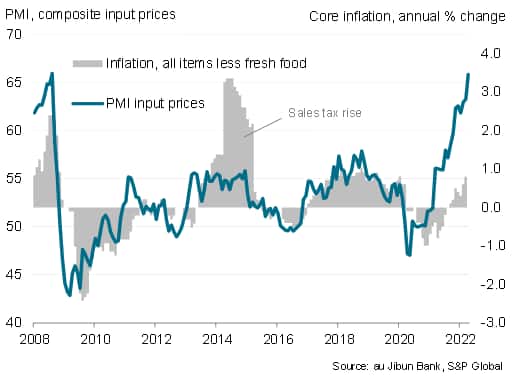